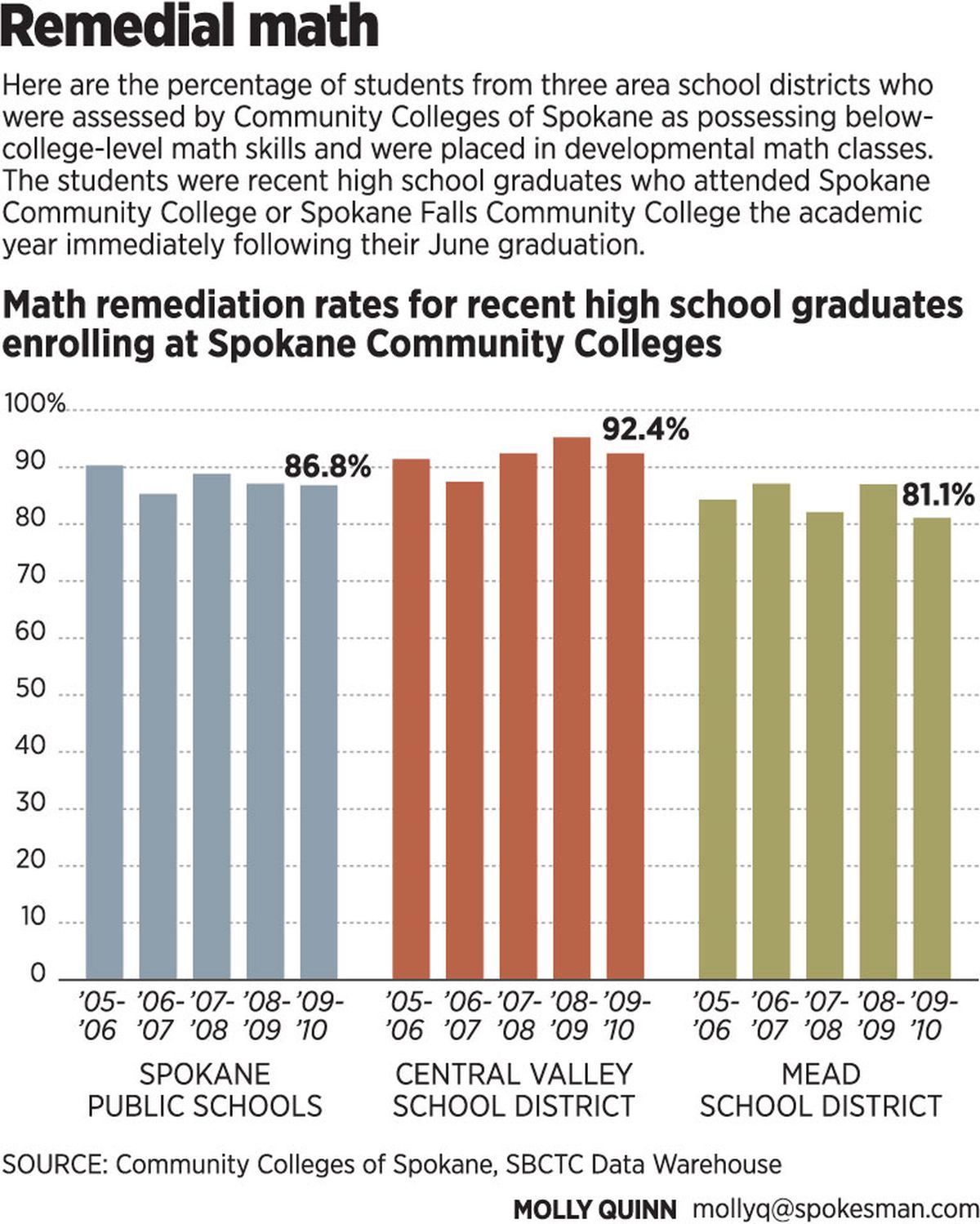 But math educators who have researched the remedial rates say math achievement is not a recent issue or one that’s limited to the region. The percentage of students taking remedial math in the Community Colleges of Spokane has been at the current level for at least two decades, and studies show the average remedial rate nationwide for community college students is around 60 percent.

Armed with more data than ever before about math performance, educators are working to lower the remedial rates and improve math requirements and curriculum in K-12 and beyond.

“It’s bad … it’s always been bad,” said Jim Brady, dean of computing, math and science at Spokane Falls Community College, who has studied remedial math rates in depth. “Since the (first) WASL , we’ve shined a light on math. What we forget to do is shine the light back to see if they were ever doing better. They weren’t.”

Bill Moore, policy associate of assessment, teaching and learning with the Washington State Board for Community and Technical Colleges, said, “It’s a long-standing issue, and it’s a complicated issue.”

But he added, “It is certainly by no means a Washington problem. There is a lot of focus on it nationally, and there’s a lot of work being done.”

Math rates have come into the spotlight for a variety of reasons: State assessments, the implementation of placement tests at community colleges and a math requirement for most college degrees are among them, officials say.

“One of the worst coincidences” was the advent of a new math curriculum – integrated math – at the same time the Washington Assessment of Student Learning and the No Child Left Behind Act hit schools, Brady said. “So if you look at it, we really weren’t paying much attention to math until about 2000.”

Because WASL scores were bad, educators began looking at college placement tests, which had been in place for only a few years, “and they were bad,” Brady said. “I think there was a silent assumption that things used to be good until the changes.”

He added, “The whole idea of math requirements for all degrees in college, that’s a relatively new idea. When people went to college in the ’70s and ’80s, they didn’t have to take placement tests. You didn’t have to take a math class to get a bachelor’s degree.”

Brady became curious when the math remedial rates first came to his attention, and began researching how many students were taking remedial classes in the 1990s. “I figured if anything has integrity in our data it’s got to be transcripts. The amount of students coming out of high school who take developmental math has been pretty consistent for nearly 20 years.”

So then Brady wondered what math scores looked like once the student had been in college math for a quarter. “And what we found out was their success wasn’t that much better,” he said. “It’s not a high school problem, it’s not a college problem, what it comes down to is, math is hard.”

People have a tendency to want to blame textbooks, blame the standards or blame a particular approach to teaching math, but “it’s a combination,” Moore said. “It’s helpful to remember that until recently the high school graduation requirement was two years of math. The notion that these students should be college-ready when they graduate is a recent expectation.”

So what’s being done to address the issue?

Both Spokane Public Schools and Central Valley School District have increased the number of math credits a student must take to meet graduation requirements – three credits or three years of math rather than two.

Statewide, the class of 2015 will be required to pass end-of-course exams, or an approved alternative, in algebra and geometry, according to the Office of the Superintendent of Public Instruction.

The placement tests for Community Colleges of Spokane, which had been national tests, were redesigned a year and a half ago to align with courses taught locally, which has already decreased the amount of students taking remedial math, Brady said.

The Carnegie Foundation, an independent policy and research center founded by Congress in 1906, is heading up one of the national efforts on math education.

“New curricular pathways are being developed, such as creating pathways where math would make more sense for their work and their lives,” Moore said of that effort. “Students need to be more actively engaged. We don’t want students in rows, the teacher does a problem and the students do 28 similar problems,” said Moore. “In general, it’s about finding ways to accelerate their success and improve their learning. Also, we are hoping to improve the perception of math.”

Said Moore, “I wish there was a simple answer, but there’s not. It will never be down to zero percent, but it can certainly be better than it is now.”