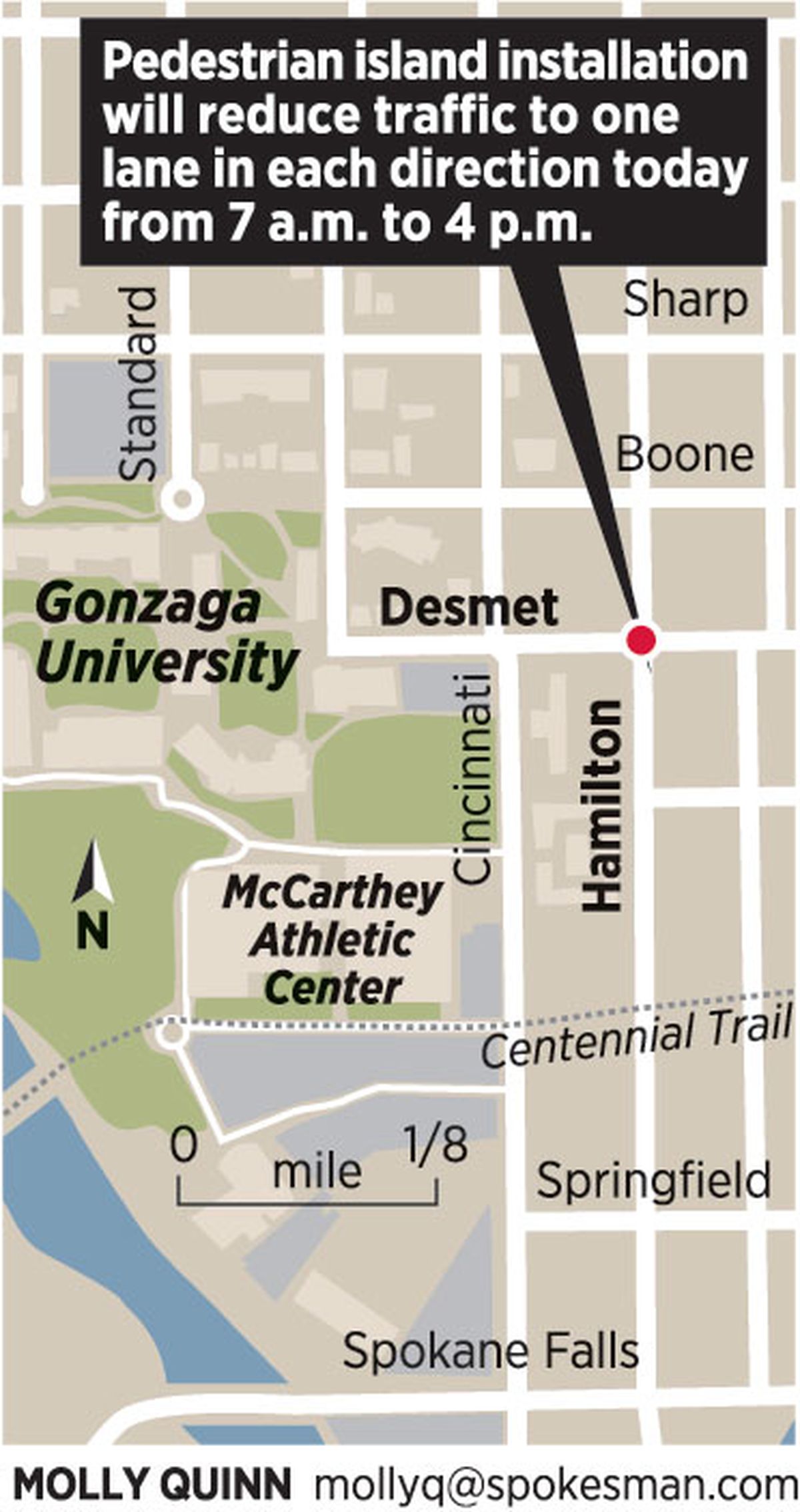 One of the more dangerous pedestrian crossings next to Gonzaga University is getting a fix this summer in a cooperative arrangement between GU and the city of Spokane.

A new concrete pedestrian island with prominent flashing lights is being installed at Hamilton Street and Desmet Avenue.

The crossing is used heavily by students coming and going from the main campus. Part of the foot traffic comes from student housing east of Hamilton.

The installation is part of an ongoing effort by the university and the city to increase pedestrian safety around the campus.

“We’ve had all kinds of pedestrian concerns because you have a lot of people walking in the university area,” said Officer Jennifer DeRuwe, spokeswoman for Spokane police.

“Anything that makes it safer for pedestrians is great with us.”

The work today may cause traffic congestion. Hamilton is being restricted to one lane in each direction from 7 a.m. to 1 p.m.

Ann Deasy, spokeswoman for the city, said GU proposed the project and is paying for the cost of the concrete island and other materials.

The city will use its own crews to install a rectangular, rapid-flashing beacon system at the intersection within the next few weeks, Deasy said.

The flashers are pedestrian-activated, operate on solar power and employ light-emitting diodes, or LEDs. As drivers approach the intersection from either direction, they will see a flasher at the island and one at the curb.

According to the Federal Highway Administration, the system uses “an irregular flash pattern that is similar to emergency flashers on police vehicles” and helps call attention to the presence of pedestrians.

Senior class engineering students at GU are going to study the effects of the new pedestrian island, Deasy said.

Last winter, GU officials reported that four students had been struck from November to February while crossing adjacent arterial streets, including a student in the crosswalk at Hamilton and Desmet. The injuries in that incident were not serious.

The Hamilton and Desmet crosswalk has long been considered a dangerous spot for pedestrians, in part because motorists are moving quickly through the area, often in heavy traffic.

During a 2008 emphasis patrol, police cited 35 drivers there in a matter of 90 minutes for failure to yield to pedestrians. That was an indication of the severity of the hazard, they said at the time.

In the past few years, pedestrians crossing at Hamilton and Desmet could arm themselves with a red hand flag from holders on either side of the crosswalk and use the flags to wave to motorists to stop or slow down.

Gonzaga in past years upgraded pedestrian lighting on Sharp Avenue at the campus and added radar displays on Sharp so drivers can see how fast they are going.

In addition, the campus has undertaken awareness campaigns and the student association handed out red blinker lights for pedestrians to carry.