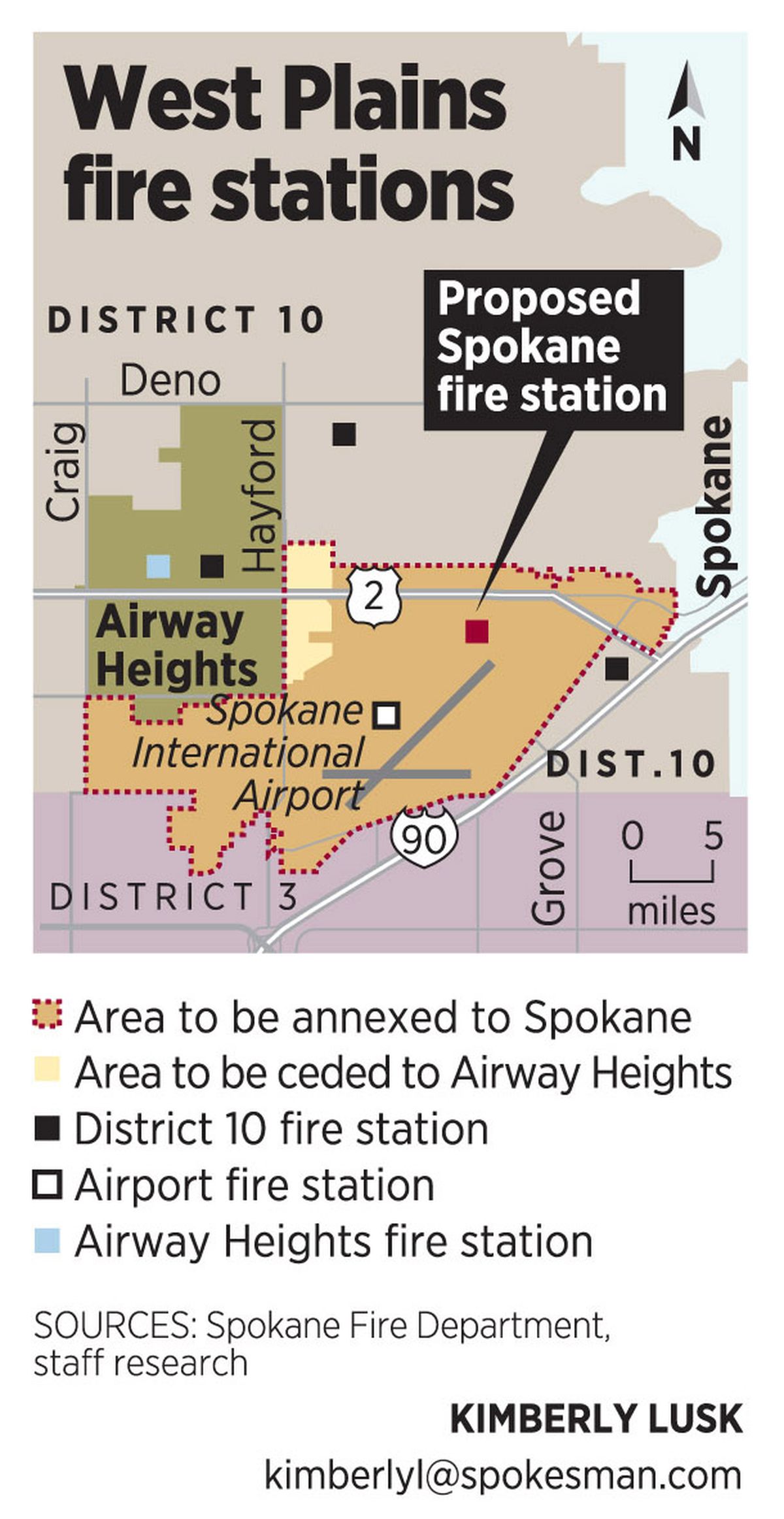 Spokane’s first fire station on the West Plains won’t be the usual classy brick structure typical of the city’s other 14 stations.

It will be a double-wide mobile home.

On Jan. 1, 10 square miles of county land between Spokane and Airway Heights will enter Spokane city limits, leaving the city less than 10 months to build a new full-time station and hire 12 new firefighters.

City officials are working with the Spokane International Airport to lease land on the northeast corner of South Spotted Road and Tech Park Drive where they can build a bay for two trucks and attach a 1996 mobile home it recently bought from the Spokane Valley Fire Department for $10,000.

“We know we need to serve the West Plains, and we know we also need to serve the Hangman Valley with all the new developments there,” said Spokane Mayor Mary Verner. “So the portable fire station unit is an ideal one for us to have purchased because it gives us some flexibility.”

The city expects to collect about $3.5 million a year in tax revenue from the annexation – the largest expansion of Spokane borders in more than a century. About $1.2 million of that will be used for fire service.

Most of the land currently is served by Spokane County Fire District No. 10. Under an agreement approved in 1999, Spokane will pay the district an amount equal to the property taxes the district currently receives from the land, even though the district no longer will be the primary responder. The city could have requested that the district continue to serve the area, but opted to provide the level of service itself.

Fire Chief Bobby Williams said the city estimates that the new station will respond to between 400 and 500 calls a year. Like most of Spokane’s fire stations, the new location will have a three-person crew 24 hours a day.

The new station will be within four miles of five other fire stations: three Fire District 10 stations and one each run by the Airway Heights Fire Department and Spokane International Airport. One wrinkle is that the annexation separates the southeast portion of the fire district from the main district, and some firefighters have argued that some departments should consolidate.

Fire administrators say consolidation is complicated by labor, taxation and other issues.

“Economically it may make sense, but politically, it may not,” said Spokane International Airport Fire Chief Bruce Millsap.

“Every entity has the responsibility to their citizens as it exists today,” Scharff said.

Millsap said the city and airport considered consolidation but decided that it wouldn’t make sense to combine forces, at least not in the short term.

“Because of the special nature of the work we do, there’s not a lot of flexibility,” he said.

Airport fire crews follow Federal Aviation Authority rules that don’t give them the ability to divert resources as easily, he said.

Williams said the city has offered to serve the severed southeast portion of Fire District 10 in exchange for the tax revenue the land generates.

Scharff said the district hasn’t received a written offer from Spokane to serve the severed land. “Our preference would be that we wouldn’t have an island to serve,” he said.

Verner said once the new station is running, the city will study where a permanent station should go.

“It’s certainly not a long-term fix, but neither is the location necessarily the long-term location.”