By Thomas Clouse and Meghann M. Cuniff The Spokesman-Review 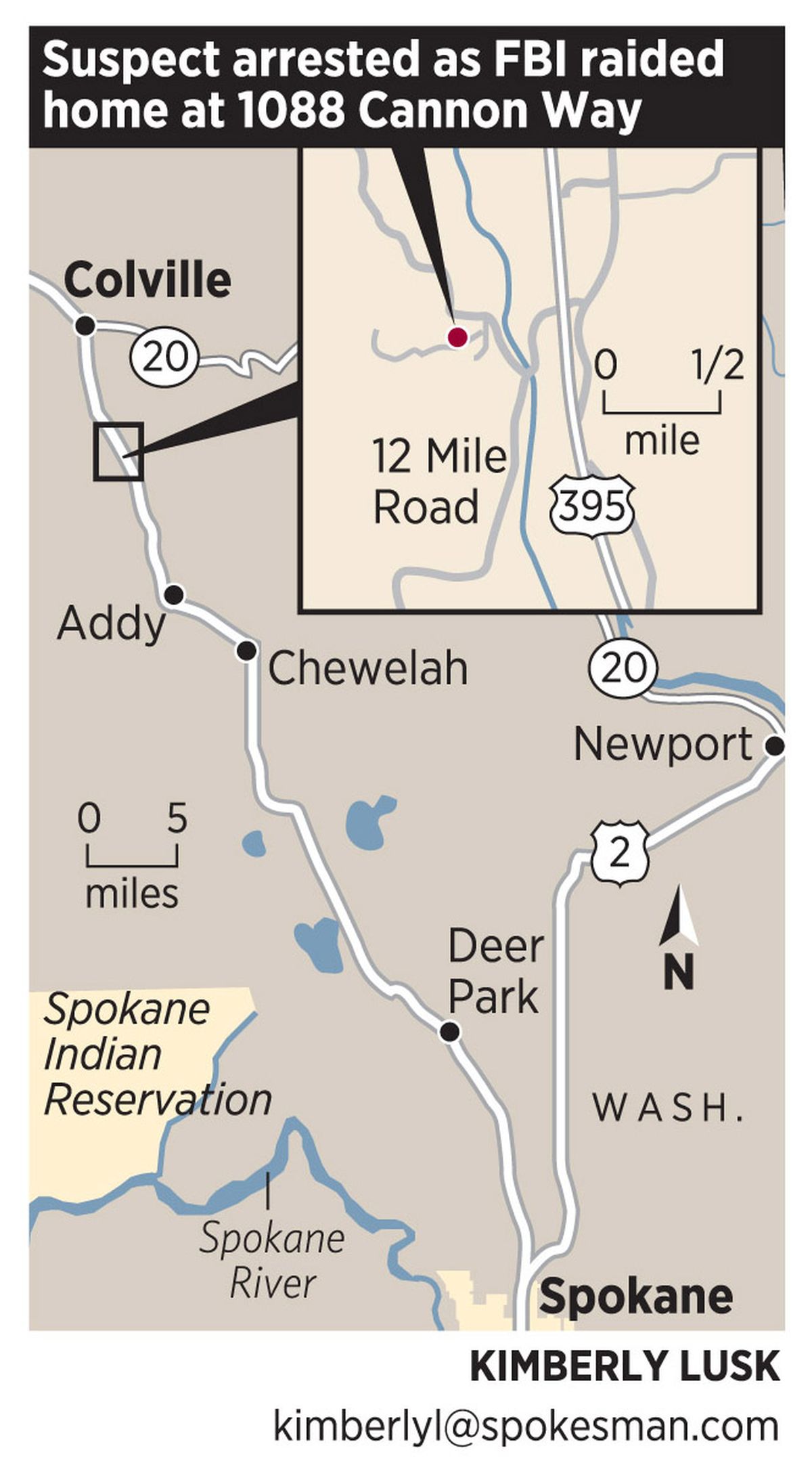 On Wednesday, dozens of federal agents converged on the property in one of the region’s largest law enforcement actions.

Harpham, a 36-year-old ex-soldier with no major criminal record but ties to the white supremacist movement, was arrested on allegations he planted the backpack bomb along the planned route of the Jan. 17 Martin Luther King Jr. Day march in downtown Spokane.

He sits in the Spokane County Jail without bond and could face life in prison if convicted of attempted use of a weapon of mass destruction and possession of an unregistered explosive device.

Much remains unknown. Details of the investigation haven’t been released, court documents have been sealed, and neighbors and friends expressed surprise at Harpham’s arrest.

Hours after agents arrested him near his home at 1088 Cannon Way, north of Addy, Harpham was in federal court in Spokane. Wearing blue jeans and a dark sweatshirt, he gave one-word answers when he appeared before U.S. Magistrate Judge Cynthia Imbrogno.

The Southern Poverty Law Center, a nonprofit civil rights organization, confirmed that Harpham in 2004 was a member of the National Alliance. The group was founded by the late William Pierce, whose novel “The Turner Diaries” was believed to be the blueprint behind the 1995 bombing in Oklahoma City by Timothy McVeigh.

“What to me this arrest suggests is that the Martin Luther King Day attack is what it always looked like: A terror mass-murder attempt directed at black people and their sympathizers,” said Mark Potok, director of the Southern Poverty Law Center’s Intelligence Project, which tracks hate groups.

But Erich Gliebe, chairman of the National Alliance, based in Hillsboro, W.Va., said Harpham is not a member of his group, which believes multiculturalism is a “failed experiment” and that all races are entitled to their own living spaces.

“We have a zero-tolerance policy regarding illegal activity and anyone committing those acts – even hinting or joking – would not be welcome in our organization,” Gliebe said.

Harpham served from 1996 to 1999 as a fire support specialist with the Army’s 1st Battalion, 37th Field Artillery Regiment at what is now Joint Base Lewis-McChord, said base spokesman Joseph Piek, who emphasized that Harpham ended his service 12 years ago.

“Serving in a field artillery unit doesn’t teach you to do what he has allegedly done,” Piek said.

Harpham also appears to be a member of the Vanguard News Network, a website that features topics such as “resettlement and construction of local communities for Whites” and “How to Live White.”

Classmates say Harpham graduated from Colville High School but attended Kettle Falls High School until midway through his junior year. Kettle Falls Superintendent Greg Goodnight, then a chemistry teacher, remembers having Harpham as a student but declined further comment. A yearbook from Harpham’s sophomore year pictures him with shaggy hair and shows he played varsity football as No. 62.

Taylor, the father’s neighbor, said Harpham moved to Wenatchee several years ago but returned to the area a year ago and talked of building a home on property he owns south of his parents’ farm. Property records show a 672-square-foot, single-family home was built there in 2007. Harpham bought the property in 1997 for $27,950.

Investigators were at Harpham’s father’s farm on Wednesday and said Cecil Harpham didn’t wish to speak to the media.

Taylor said Kevin Harpham never appeared to be racist. “I never sensed that at all,” Taylor said.

“He was a real nice guy,” said Adriaen Robbins, who met Harpham while the two worked together at McDonald’s after high school. “He wasn’t weird or anything. It’s completely unlike him. A lot can change in 16 years.”

Another old friend, Cole Cameron, said he often partied with Harpham and rode around in Harpham’s ’66 Chevelle.

“We were just kids out raising hell in the woods, partying, cruising around,” Cameron said. “He wasn’t as outgoing as us. He was always quiet, kind of off to the side, but he always wanted to hang out with us.”

“I never would have pegged him to be a white supremacist,” he added.

Christy Ludwick, 23, said Harpham is a regular customer at the Old School House Trading Post Conoco in Addy. She said he bought food, drinks and gas every couple of days and drove a black Jeep Cherokee. “He was always by himself, always,” she said.

At his first-appearance hearing, Harpham sat with his arms crossed leaning on a table. He generally averted his eyes from a full gallery as he waited for Imbrogno to begin.

“I know very little at this point,” said Peven, who met with his client for about an hour before the hearing. “This is just the beginning of a long road.”

Imbrogno said the government’s evidence will be presented to a grand jury on March 22. If they indict Harpham, an arraignment will be held the next day and a trial date will be set.

If Harpham is not indicted, Imbrogno will hold a probable cause hearing on March 23 where federal agents must testify about the evidence they have to support the charges.

Mike Ormsby, the U.S. attorney for the Eastern District of Washington, announced the arrest but provided no other details about how the investigation came to be centered on Harpham. All documents supporting the arrest have been sealed.

Records indicate Harpham is a registered voter, which suggests he has no felony convictions.

Previously, federal officials had called the bomb a thwarted attempt at domestic terrorism and said the investigation would likely turn on forensic testing of the device, which was sent to the Federal Bureau of Investigation lab in Quantico, Va.

The developments Wednesday came as welcome news to the Rev. Happy Watkins, who was a featured speaker at the Unity March in January.

Watkins, senior pastor at New Hope Baptist Church in Spokane, said federal officials hadn’t given him any updates about the progress of the investigation.

“We’ve been asking questions but no one has talked to us,” said Watkins. “People in New York City hear about Spokane and associate us with Hayden Lake and the Aryan Nations. It just shouldn’t be that way because it’s a great place to live. We’ve still got that hate that lingers and doesn’t go away. That’s disheartening.”

The bomb was discovered at the northeast corner of Washington Street and Main Avenue just minutes before the Unity March. Spokane police officials rerouted the march to avoid potential danger.

Sources said the bomb was a sophisticated device that could have inflicted multiple casualties. It also appeared the bomb maker used rat poison in the device, with the possible intent of causing victims to continue to bleed once struck with shrapnel.

As the investigation progressed, much attention was focused on the region’s past bombings, all of which were carried out by either members of the Aryan Nations or other white supremacists.