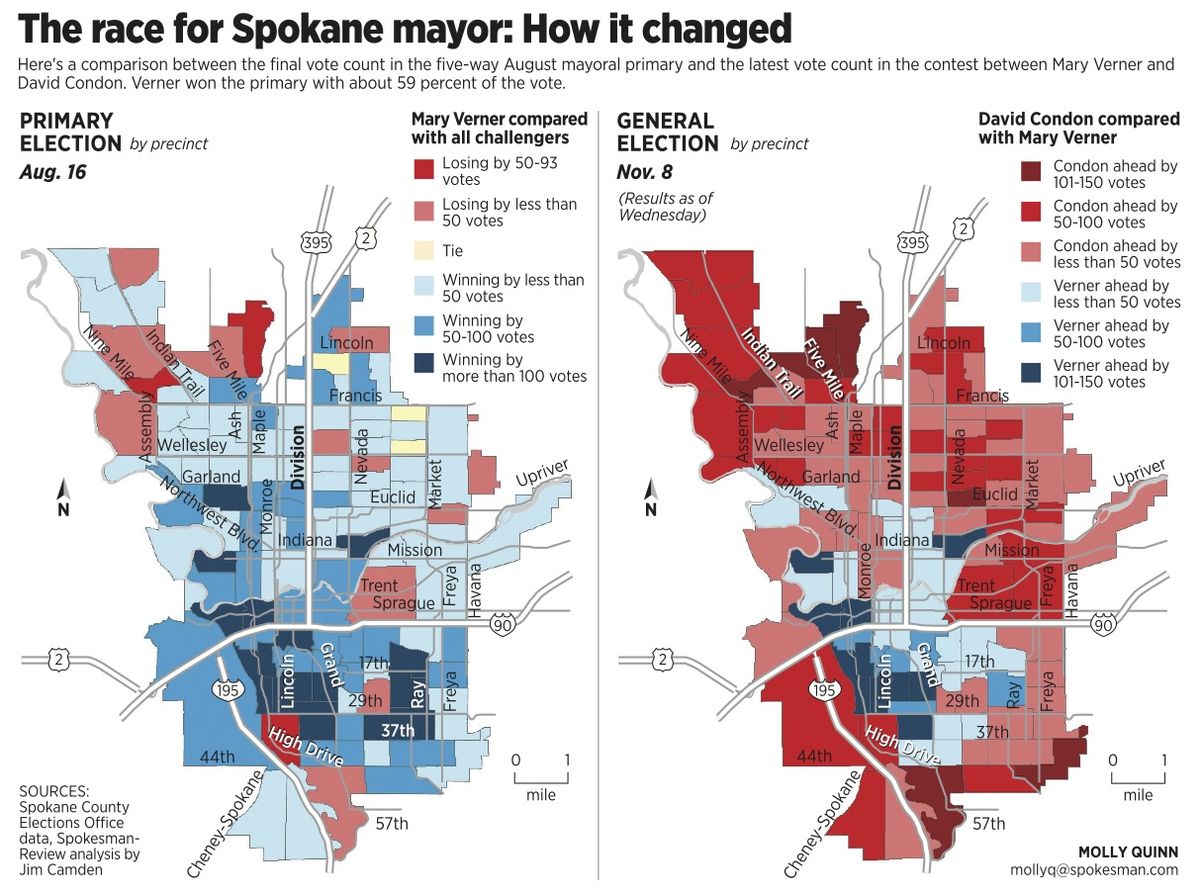 This list has been changed from the original version to correct an error in the vote total for Mike Allen.

Many of those elected Tuesday to serve in Spokane City Hall were the most outspoken ahead of the election that Proposition 1 would doom the economy.

But the same electorate that chose those candidates also decided to give Proposition 1 – the Community Bill of Rights – a fighting chance. The ballot measure is still too close to call, although it lost ground in counting on Wednesday.

Councilman Steve Corker said the tightness of the Proposition 1 measure, while so many Republican-backed candidates sailed to victory, is but one result in city races he can’t explain.

“It’s one of the delights of trying to understand American politics,” Corker said.

It wasn’t just conservatives who opposed Proposition 1, which among other things would require builders of some kinds of developments to collect signatures of a majority of voters in a neighborhood to win approval of their projects: No one in office or running for office endorsed it.

At the same time, the electorate appears to have voted out an incumbent mayor and denied a former mayor a job leading the City Council. Another incumbent, Richard Rush, is losing his bid to keep his City Council seat, though by a slim margin.

Envision Spokane’s first attempt to win approval for a Community Bill of Rights failed with only about 25 percent support two years ago. That proposal was longer, and the City Council added its own questions to that ballot asking voters if they wanted to increase taxes or cut services just in case the proposal was approved. Supporters said at the time that the council’s ballot questions doomed the measure.

Still, even supporters of the initiative were surprised at how well it did this time. Brad Read, president of Envision Spokane’s board, called himself “pleasantly stunned” at the nearly 50-50 result.

Read said some speculate the results showed an anti-incumbent and anti-establishment mood among the electorate.

“This is about people and not politicians,” Read said of the voters’ stance in the face of opposition from all candidates.

The council district that appears to have elected the most conservative councilman – Northeast Spokane, which gave the majority vote to Mike Fagan – was the district that gave Proposition 1 the most support. Fagan said he also is having difficulty explaining the incongruity, but offered that the proposition likely did better because the opposition campaign got off to a late start.

Verner lost more ground in her race against David Condon as more ballots were counted on Wednesday. She now trails by 2,100 votes and would need more than 60 percent of remaining ballots to win. In an interview before the results were released, she said there are many votes left to count and that she remained hopeful. Attempts o reach Condon were unsuccessful on Wednesday.

Corker, who endorsed Verner, said he believes the Otto Zehm case turned the election for Condon. He said he knows voters who had been backers of Verner but changed their minds as a result of the trial of Spokane police Officer Karl F. Thompson Jr., who was convicted last week of violating Zehm’s civil rights.

“I often said that I don’t think Condon could win, but Mary could lose,” Corker said.

Corker also endorsed Ben Stuckart, who defeated former Mayor Dennis Hession in a bid for City Council president. When he made his choice public, Corker said Verner’s primary results indicated that the city would retain an experienced mayor, so the city could vote for a new face for council president. Corker said he doesn’t regret his endorsement, though he worries about experience because of the unlikelihood of a quick recovery from the economic downturn. City Council President Joe Shogan said he’s also concerned about the lack of experience in the top two spots at City Hall.

“What are we going to do if there’s a crisis?” Shogan said. “They’ve never been in this situation.”

Stuckart said Tuesday night he’s confident that the transition will be smooth with new leaders at the top.