Educational attainment also appears to have a relationship with perceptions of overall health. In Washington, 36 percent of those with a bachelor’s degree reported having excellent health, but of those high school education or less, just 19 percent reported perceiving their health as excellent. 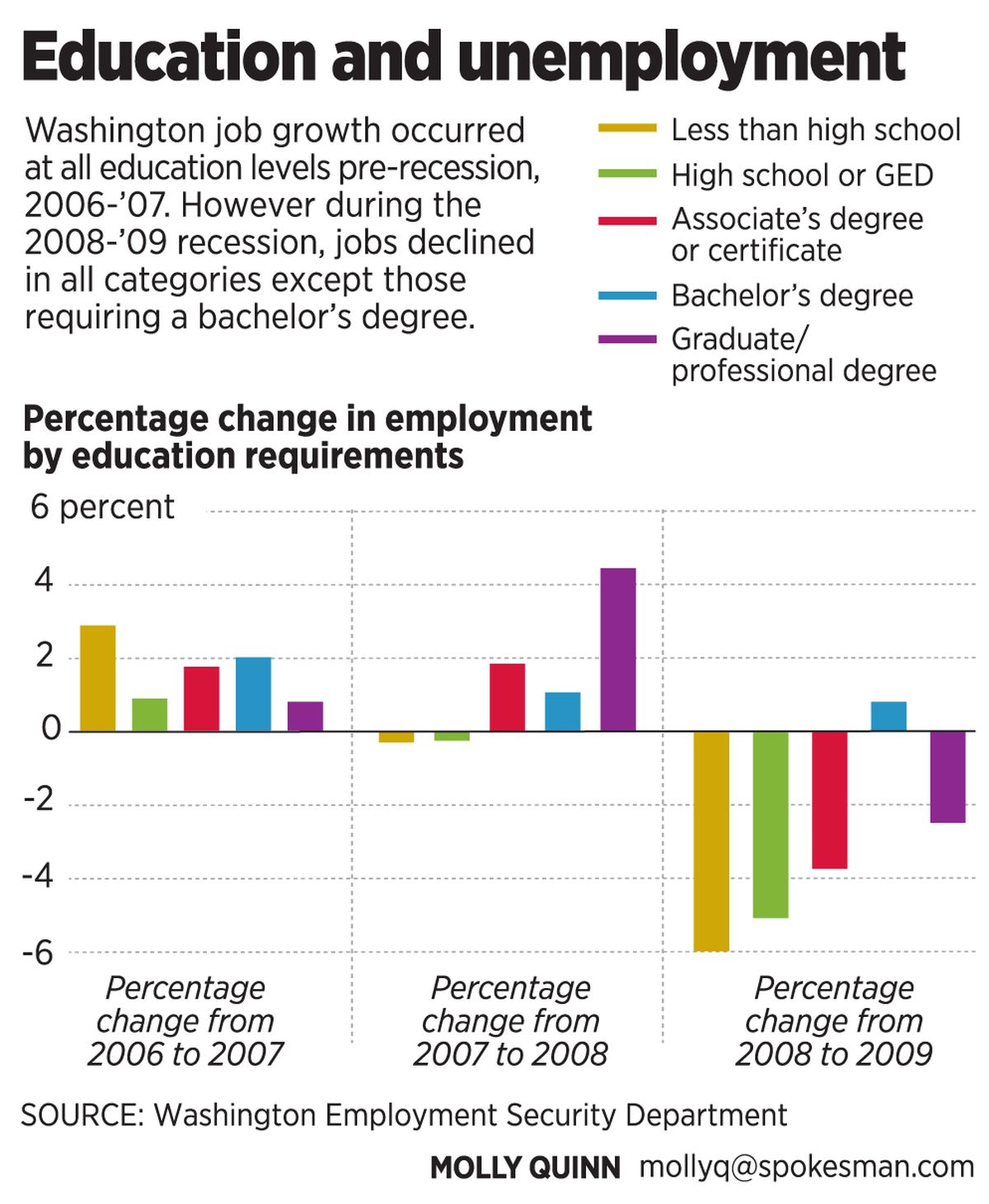 Look up college costs for public and private universities at collegecost.ed.gov/catc/

Groups of students huddled around small tables, their noses buried in books on a recent evening at Spokane’s Riverpoint campus.

Their immediate focus was on their studies, but for many, the cost of college was lurking in the back of their minds.

The question of college’s worth has come under scrutiny as the economic downturn drags on, as tuition in Washington increases faster than inflation and as some students struggle to find jobs and repay loans.

Some experts and graduates say despite those difficulties, they’d be worse off without a degree, but others say the payout is shrinking.

He estimates he’ll graduate with $25,000 in student debt, despite working 30 to 40 hours a week at a catering company during the school year and summer to ease the financial burden. Entering his senior year, he knows he’ll have to face that debt soon.

“It’s definitely not a time I wish to confront, but I know it’s going to come,” he said.

Bernier said his rigorous schedule leaves him exhausted at times, but like many other students, he said he sees his sacrifices as an investment he’s confident will pay off.

“I’ve managed this long, so I’ve got it down to a system,” he said.

Deciding to forgo postsecondary education based on the economy is making “long-term decisions based on short-term conditions,” said Don Bennett, executive director of the state Higher Education Coordinating Board.

“I think it’s still worth it,” he said. “There’s always going to be a return to the individual. It’s going to pay off.”

On average, the more educated a person is, the more money he or she will make, he said.

In Washington, the median average hourly income for an 18- to 24-year-old with a high school diploma is $10 per hour; the average income for someone with a bachelor’s degree in that age range is $17 an hour, according to a report compiled by the state Workforce Training and Education Coordinating Board. An associate’s degree or certificate will earn a Washingtonian an average of $14 an hour.

“I think it’s worth it in terms of projected long-term average earnings, (which) go up by degree, by education level,” Bennett said. “We know that from looking at all the numbers.”

However, while more education usually nets higher pay, recent graduates nationwide are making less upon entering the job market than 10 years ago, even when inflation is taken into account, according to a recent study by Heidi Shierholz, a labor economist with the Economic Policy Institute.

While recent grads may not make as much as a decade ago, they are less likely to be unemployed than those who don’t have a college degree, said Gary Larsen with the Higher Education Coordinating Board.

“So, even though it may be hard to find a job even with a college degree, the task is even more difficult without one,” Larsen said. “The data’s pretty clear. Folks with four-year degrees are generally less unemployed.”

However, those numbers do not include those who are underemployed or who are not working in their field, which economists say could represent a significant number of people.

Brad Hilty, a graduate student of speech and hearing sciences at WSU Spokane, said he thinks he’ll land a well-paying job, but said many of his friends are not so lucky.

“It could be frustrating for people who end up graduating and can’t even go into the thing they have their degree in,” he said. “You graduate and you don’t always get to go into what you want.”

“The composition of jobs out there for those with a high school diploma or less is shrinking while the percentage of those that require some college or an associate degree, or they require bachelor’s degree or higher, is increasing,” Bennett said. “That’s the nature of the economy – the information economy – that we’re moving into.”

But the payout of higher education depends not just on the level of educational attainment, but also the area of study pursued. Bennett said science, technology and engineering professions typically command the highest pay, but that anyone seeking postsecondary education should weigh the benefits of their field of study with how much debt they incur.

“I think you have to be aware of what the job prospects and what the likely salaries are when you’re making a decision about how much debt to take on,” he said. “If you’re going to go into something that’s maybe not as highly compensated, then that would tailor how much debt you’d want to take on.”

Despite the benefits of postsecondary education, data show students are incurring more student debt and having a harder time repaying that debt.

With cuts to higher education at the state level, tuition rates at all public four-year colleges have increased this fall, forcing students to foot a bigger portion of the bill and, for some, take on more debt.

WSU has hiked tuition by 16 percent, Eastern Washington University by 11 percent, and the University of Washington by 20 percent. Nationwide, the cost of college for in-state students, including tuition, room and board, at a four-year university was $15,876 in 2008-09, according to the U.S. National Center for Education Statistics. That’s more than double the cost in 1990.

That increase may explain in part why, according to the Federal Reserve Bank of New York, student debt is the only type of debt to increase since the recession began, while mortgage debt, credit card debt and home equity loans are down. In the second quarter of 2011, there was $550 billion in outstanding student debt, 25 percent more than the third quarter of 2008.

But Bennett said the possibility of having some debt should not discourage students.“Our average of debt per student is about $5,000 a year, so maybe $20,000 of debt on average with people coming out of school with four-year degrees in this state,” he said. “That doesn’t seem outrageous to me for those that need that additional assistance to be able to afford the cost of getting their degrees.”

But Bennett emphasized that a four-year university isn’t the only way to pursue education and training after high school.

“When we talk about going to college these days, we really need to open up our perspective of what that means,” he said, adding that vocational certificates or two-year degrees are career paths that can pay off. “Really, no matter what kind of field a person wants to go into these days, some addition training beyond high school is important.”

For 19-year-old John Blankenfield, vocational school makes more sense for his career path and financial situation. He’s working to get into a nine-month program at Spokane Falls Community College with the hopes of landing a job as a park ranger.

Blankenfield, who will have to pay his own way through school, decided against a four-year university due to the increasing cost, coupled with the uncertainty it would land him a good job.

“Mainly it’s cheaper if you don’t have to go to school as long,” he said of his decision, adding, “Managers in places that are hiring will look for people with those specific job skills.”