The assembly meets on the first Friday of each month and has established several subcommittees to explore and address major neighborhood issues such as traffic planning, growth management and crime. The Assembly released its 2014 goals just before Christmas; here are some highlights (scroll past graphic): 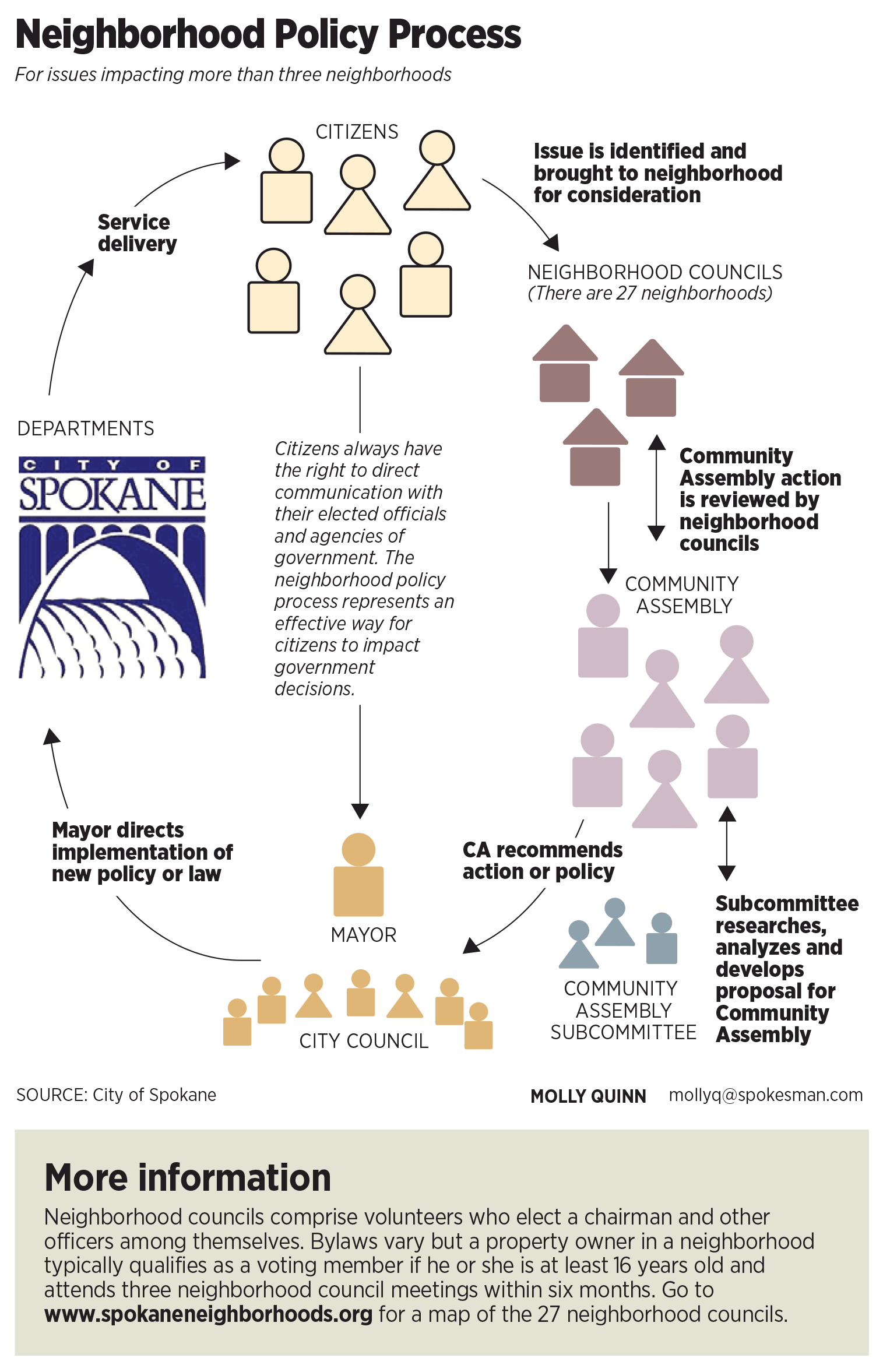 Chairwoman Carol Hayes has served on the Nevada-Lidgerwood Neighborhood Council for four years.

2013 accomplishment: The public safety committee researched and helped develop a residential storage ordinance that was just approved by the City Council. Hayes said the ordinance limits how much stuff, such as building materials and car parts, residents may store in front and backyards.

2014 goal: Graffiti cleanup. Hayes said the committee is looking to develop a citywide program that can help people who’ve been victimized by graffiti but can’t clean it up, for physical or financial reasons. “We are also attacking vehicle storage,” Hayes said, explaining that cars with expired licenses plates may not be left on neighborhood streets for more than 24 hours.

Chairwoman Korissa Fitterer has lived in the Chief Garry Neighborhood since 2007 and said she’s been involved in the neighborhood council and the Community Assembly for about a year.

2013 accomplishment: Fitterer said the committee participated in several community events and handed out information about neighborhood councils and the Community Assembly. “The feedback we got was very good,” she said.

2014 goal: Fitterer said the committee has been discussing a name change to something that “tells people we are here to help them figure out which neighborhood they belong to and how to get involved.” This committee is also in charge of planning the 2014 retreat for neighborhood council members, and aims to continue to participate in community events such as Unity in the Community in 2014, “to get the word out that we are here and let people know what we are doing,” Fitterer said.

Chairman Paul Kropp serves on the Southgate Neighborhood Council and said he has been involved in neighborhood issues there for more 15 years, “since it was called Moran Prairie.”

2013 accomplishment: Keeping the Community Assembly and the neighborhood councils informed about the city administration’s revision process for comprehensive plan, which has to be completed in 2014. Kropp wrote in an email that the committee has also provided key recommendations about the use of the “so-called photo-red traffic ticket revenue for the Community Assembly to consider and forward to the City Council.” The neighborhood councils retain $300,000 of the photo-red revenue each year to be spent on traffic calming measures.

This committee is led by three people: Kelly Cruze from West Central, Teresa Kafentzis from Southgate and Patricia Hansen from Cliff-Cannon Neighborhood Council.

2014 goal: To continue to assist the city with comprehensive plan updates and land-use issues. Hansen said the designated use for a particular piece of property is especially important to the people who live nearby.