When the Looff Carrousel returns to Riverfront Park later this spring, visitors will find themselves riding on wooden horseback closer to the waters of the Spokane River.

The glass rotunda taking shape on the river’s south bank, at the edge of Riverfront Park, extends closer to the waterway than the 109-year-old attraction’s previous home. The repurposed Bavarian beer garden from Expo ‘74 has been demolished, and in its place sits a new, $7 million structure that is targeted for opening just before Bloomsday.

“One of the things you notice in this building right away is that the carousel is actually offset in this rotunda,” said Leroy Eadie, director of the Spokane Parks department, during a tour of the construction Thursday afternoon. “That was on purpose, designed so that the carrousel got as close to the river as possible.”

The structure was designed by the firm NAC Architecture. The glass panels stretching from the floor to a domed ceiling are meant to invoke antique music boxes that set miniature carrousels behind glass, according to the firm.

Walker Construction Inc., of Spokane, is overseeing work on the building. 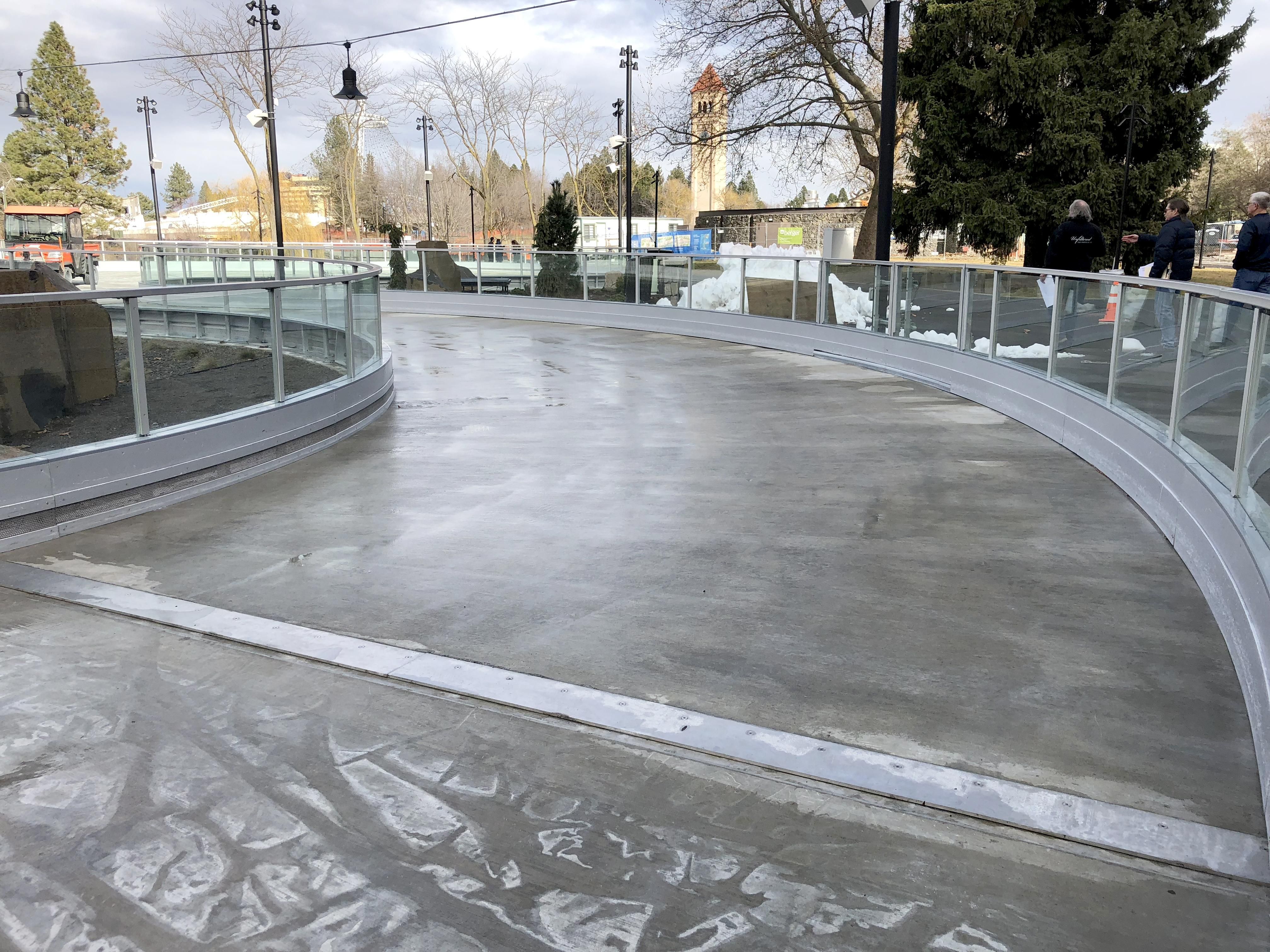 Skating ribbon re-opening still up in the air

Park officials have not yet set a date for the potential re-opening of the skating ribbon, which was shuttered earlier this month due to an ammonia leak. | STORY »

Mayor David Condon joined the tour Thursday, walking through the building’s main rotunda where the historic carrousel, built by Charles I.D. Looff as a wedding gift for his daughter in 1909, will be housed. The structure will also feature three rentable party rooms, capable of hosting around 70 people, according to park staff, and an expanded gift shop area near the current site of Spokane’s famed Garbage Goat that will sell trinkets and memorabilia of the park and carrousel.

Prices will be the same as they were in the old building: $2 for a spin on the attraction that once called Natatorium Park home. For $5, visitors can buy unlimited rides for an entire day.

Condon paused to accept a gift of $150,000 from BNSF Railway to use on the park’s redevelopment, which has been primarily financed by voter-approved bonds totaling $64.3 million. He drew the attention to the clock tower, a remnant of the park’s previous life as a railyard, visible out the windows behind him.

“It was the railroads that came here, some hundred years ago, that really changed the perspective,” Condon said. “That clocktower has been a guiding point to our community for decades.”

The city applied for funding through the railway’s grant program, operated by BNSF’s charitable foundation arm, said Courtney Wallace, a spokeswoman for the company.

“It goes to help redevelop the park, however they’d like,” Wallace said.

Park planners have been exploring different ways to raise money supplementing the taxpayer dollars, including working with the nonprofit Spokane Parks Foundation to raise an additional $3 million or more to support the redevelopment.

The budget for the carrousel’s new home, the second planned attraction to open as part of the Riverfront Park redevelopment, has inched upwards over the past two years as park planners decided to incorporate the costs of renovating the adjacent Rotary Fountain and other surrounding features to the contract with Walker for the carrousel building.

Planners originally planned to spend about $8.5 million on the attraction, according to budget documents from August 2016. The total amount budgeted for work on what planners are calling the “South Bank Central” portion of the park is now $10.5 million. As of January, a little more than $10 million had been spent or committed to work in that area of the park, according to budget documents.

The additional work also pushed the opening of the carrousel back by several weeks. Before the fountain work was included in the contract, park planners had estimated an opening as early as Valentine’s Day of this year.

Combined with anticipated savings on the new Howard Street bridge, which has been completed but will open alongside the fountain and carrousel building later this spring, and the over-budget skating ribbon, all work on the park’s southern edge should fall within budgeted amounts, said Berry Ellison, the landscape architect overseeing the redevelopment for the city.

“With all those things together, we’re looking at a wash,” he said.

The city still hasn’t been informed how much it’ll have to pay for rock removal near the carrousel site, Ellison said.

Across the Howard Street bridge, which has been painted a bright orange hue and includes a side balcony where visitors can descend for a closer view of the river’s surface, workers with Garco Construction were busy ripping apart the site of the old Spokane Story exhibition beneath the netting of the U.S. Pavilion.

Workers have already demolished the former IMAX theater that was built after Expo ‘74, and the roof above the former site of the Ice Palace skating rink has been reduced to rubble. That left a clear view of the original cable and netting that once supported the canvas covering above the pavilion floor as well as the mast that towers above the Spokane skyline.

“Keep in mind, these were all structures after Expo,” said Garret Jones, planning and development manager for Spokane Parks. “Now, you look at it and it automatically brings your eye up to the top of it.”

Designers are finalizing the look of the new pavilion, which will include shade structures and a winding path leading to an elevated platform 40 feet above the ground for views of concerts and other live events. Terraced seating on the eastern edge of the renovated pavilion will be built using clean soil from the park excavated during the construction of the skate ribbon and carrousel building, Jones said.

The pavilion construction is expected to cost about $16.5 million to build and an opening is slated for May 2019.