Wiley Miller, the cartoonist behind the popular “Non Sequitur,” told an audience for the first time Monday that he almost lost his livelihood and marriage after he scrawled a vulgar note to President Donald Trump that appeared in newspapers nationwide.

The comic that ran on Feb. 10, 2019, was created weeks before on a day like many others since Trump took office. The president had said something that upset Miller, so he penciled the note.

Now almost six months later, Miller’s “Non Sequitur” is slowly returning to papers across the country, including in Spokane. Miller traveled to Spokane on Monday for a Northwest Passages Book Club event centered on his career as an artist and to welcome “Non Sequitur” back to the paper. 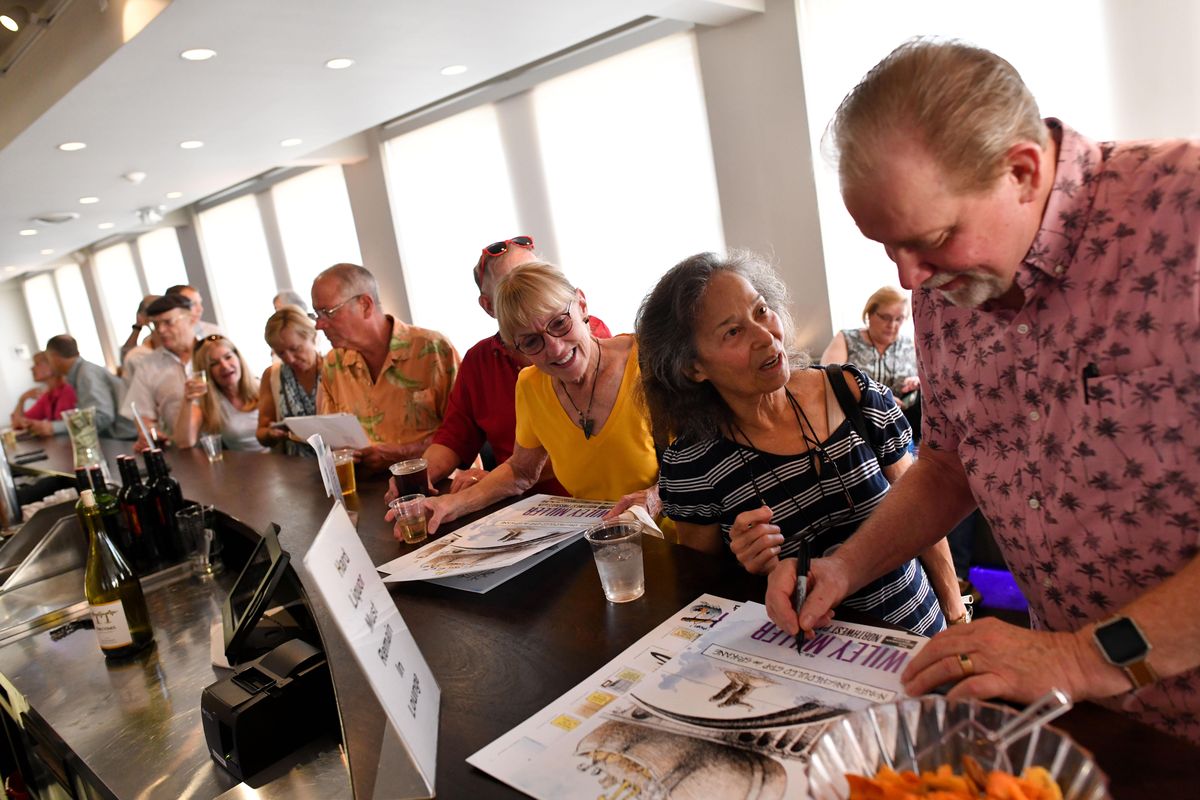 Miller first revisited his mistake and apologized. In an interview, he said he has been reminded to heed his own advice: “Follow your instinct and do what you know is right.”

Thinking back to that day, Miller recalls it was around Christmas with his house full of family and in the midst of the government shutdown. Miller works on his comic strips almost two months ahead of the publication date.

“I was just infuriated by how callous it was,” Miller said of politicians and the shutdown.

It was one more thing “among all the other outrages that had been going on at the time,” Miller said.

He called the scribbled text a “cathartic exercise.” Apparently it worked, but Miller said he forgot to white out the text.

When readers noticed, Miller found himself in the middle of a Twitter storm in which most readers praised him.

His Twitter following tripled overnight. So Miller said he decided to play along rather than admit he had made the mistake.

That was “the real stupid lapse of judgment,” he said. “I was really admitting to a breach of trust with my editors.”

He and his wife lost their dream home and moved to another state following the hit to his reputation and his income. The experience was “financially and emotionally draining,” Miller said.

Miller deleted his accounts and left social media. He began to move forward by sending an individualized apology letter to papers who ran his comic strip.

In an apology letter to “editors and readers” that ran in Sunday’s edition of The Spokesman-Review, Miller wrote “Remorse is an understatement.”

“It still boils down to – I have to take ownership,” Miller said Monday evening.

The Spokesman-Review asked readers if “Non Sequitur” should be returned to the comics page. The response was overwhelming, said Editor Rob Curley.

Of the approximately 1,400 readers who replied, all but about 40 wanted the return of Miller’s work.

He drew a special Spokane comic to thank readers who welcomed the return of his work.

“I decided to do this because I’m very grateful,” Miller said of coming to Spokane.

An audience of about 500 at Monday’s Northwest Passages Book Club event was thankful too.

Simone Ramel-McKay was excited when she heard Miller was coming to Spokane and that she had the chance to meet him.

“We were upset with his stupid mistake,” Ramel-McKay said.

However, that didn’t diminish how much she liked Miller’s work.

“I’m sure he’s going to be more conscientious,” Ramel-McKay said.

Miller thinks his work has changed and hopes readers will take note. There has been a refocusing and redoubling of getting back to the basics, Miller said.

“Ironically these papers aren’t seeing the best work I’m doing,” Miller said of papers that no longer run his comics.

Miller’s current comics are only the most recent part of his long legacy.

Miller began drawing when he was about 6 years old and never stopped, he said.

His mother encouraged his passion and enrolled him in drawing lessons with Tom McDonald, the cartoonist behind the famous Mr. Magoo.

In 1983, he created his first syndicated comic, “Fenton.”

He won the Robert F. Kennedy Award for Journalism in editorial cartooning in 1991. A year later, “Non Sequitur” became his next syndicated comic strip.

“Every day was going to be different from the day before,” Miller said of the comic.

He drew on all the skills he had gained in his years as a cartoonist both in editorial and comic strip creations to make “Non Sequitur,” Miller said.

Miller mentioned his experiences listening to influential cartoonists speak and how they inspired him. Just moments later, though, he was confronted with the fact that he was the one inspiring others.

At the end of the event during an audience question-and-answer session, 12-year-old Maria Friendshuh asked what it’s like to transition into drawing as a career.

Friendshuh came to the event because she loves cartoons and drawing, she said.

“I want a job that has something to do with art,” Friendshuh added.

For Miller, being a cartoonist is more than a job, it’s a way of life, he said.