For children (age 17 and younger), bring a document from a school, day care center or social service agency verifying each child’s name, date of birth and show their address matches the adult’s address. WIC folder with current WIC check enclosed are accepted as ID for children. Birth certificates may only be used to verify date of birth.

Email The Spokesman-Review at christmasfund@spokesman.com.

A cascade of teddy bears hit the ice during the Spokane Chiefs’ annual Teddy Bear Toss on Saturday night, prompting a flurry of activity to collect up the thousands of stuffed animals to be distributed at the Christmas Bureau.

It took a fleet of pickup trucks and a small army of volunteers to remove them from the rink so the game could continue.

The Christmas Bureau is a joint effort between Catholic Charities, the Volunteers of America and The Spokesman-Review to provide food, books and toys to needy families for Christmas. The Spokane Chiefs have been contributing toward that effort with the Teddy Bear Toss since at least 2001, said Brian Cobb, director of media/public relations.

Chiefs fans set another record this year, tossing 8,604 stuffed animals onto the ice after Adam Beckman scored just 41 seconds into the game. 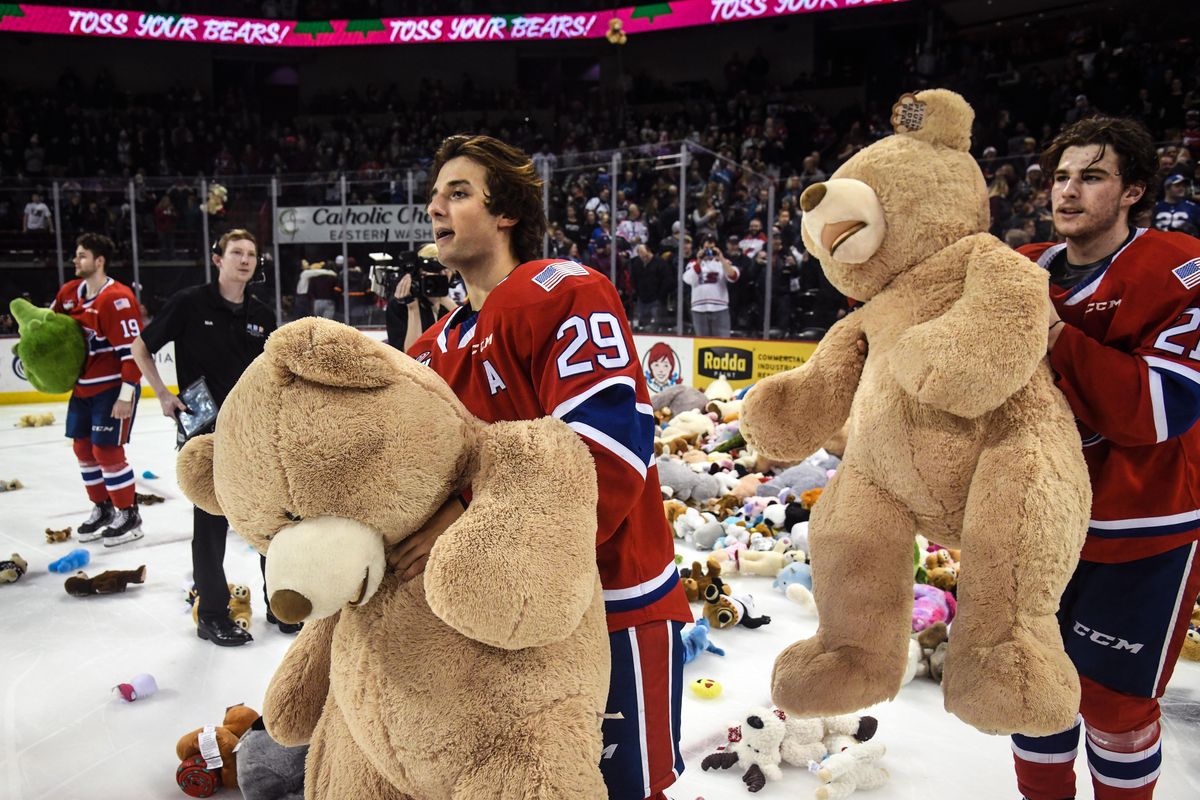 Even before the first bear took flight toward the ice, Cobb was hoping for another record-breaking year. Chiefs fans have set records the past two years, tossing 7,655 bears and other stuffed animals in 2018. The previous record, 6,829 stuffed animals, was set in 2017.

“The attendance numbers are looking good,” he said. “Our lower bowl has been sold out for two weeks. It’s always a toss-up on how many people bring how many bears.”

There are always a few huge bears that get heaved onto the ice after much effort.

“Every year there’s the big bears from Costco that have to crowd-surf over the wall,” he said.

Cobb said he always looks forward to the non-bear stuffed animals, like monkeys.

“There was a chili pepper one year,” he said.

The Teddy Bear Toss continues to be one of the most popular nights on the schedule. This year the game was against the Chiefs’ biggest rival, Tri-City, and was also a family feast night. People could buy popcorn and soda for $1 each and hot dogs for $1.50.

“The stars all aligned,” Cobb said.

The annual game attracts people who might not normally attend a hockey game, Cobb said.

“It’s become a holiday tradition for people,” he said. “We get a lot of families at this game. There’s sort of a different feel to it.”

Cobb said the organization likes that the teddy bears go to a good cause.

“They get redistributed to the families that can use them,” he said.

The number of donations coming in has started to pick up, with $12,557 being added to bring the year-to-date total to $130,909.59. The goal is to raise $535,000 by Christmas. It’s a big task that is made possible by the generosity of people living in Eastern Washington and North Idaho who give amounts both large and small.

The law firm of Douglas Eden donated $6,000. “All of us at Douglas Eden are happy for the privilege to continue supporting The Spokesman-Review Christmas Fund with our $6,000 gift to families in need,” reads an enclosed letter. “By joining with others in Spokane, we want to spread holiday peace, joy and sharing in our community. A very big ‘thank you’ to each of you at The Spokesman-Review Christmas Fund for your good work in making the holidays a special time for so many people.”

Mike Schmeltzer and Shani Marchant of Spokane donated $150. “Thank you for the opportunity to help make Christmas a little brighter for needy families in our community,” they wrote. “This donation is in memory of our parents, Charles and Irvine Schmeltzer and Butch and Maureen Marchant, who were longtime supporters of the Christmas Fund.”

Leona Dexter of Spokane contributed $100. “I’m happy to help once again,” she wrote. “Thank you to all the volunteers who make it all work.” An anonymous Spokane donor gave $100 in memory of Joe and Irene Lynch of Coulee Dam. Lydia Vila of Lake Forest Park, Washington, sent $100 via PayPal.