Day at the museum

Silver wings spread wide and long over the new hangar at Felts Field – gleaming, riveted and so close you can touch them.

But don’t. Instead, crawl into the cabin of the Douglas DC-3 and take a look at the luxury afforded to corporate executives in 1949. Telephones, big chairs and hideaway beds fill the fuselage. There’s plenty of room, with space to spare.

The behemoth is just one of eight aircraft on display at the aviation museum that the Historic Flight Foundation opened Tuesday at Spokane’s Felts Field. 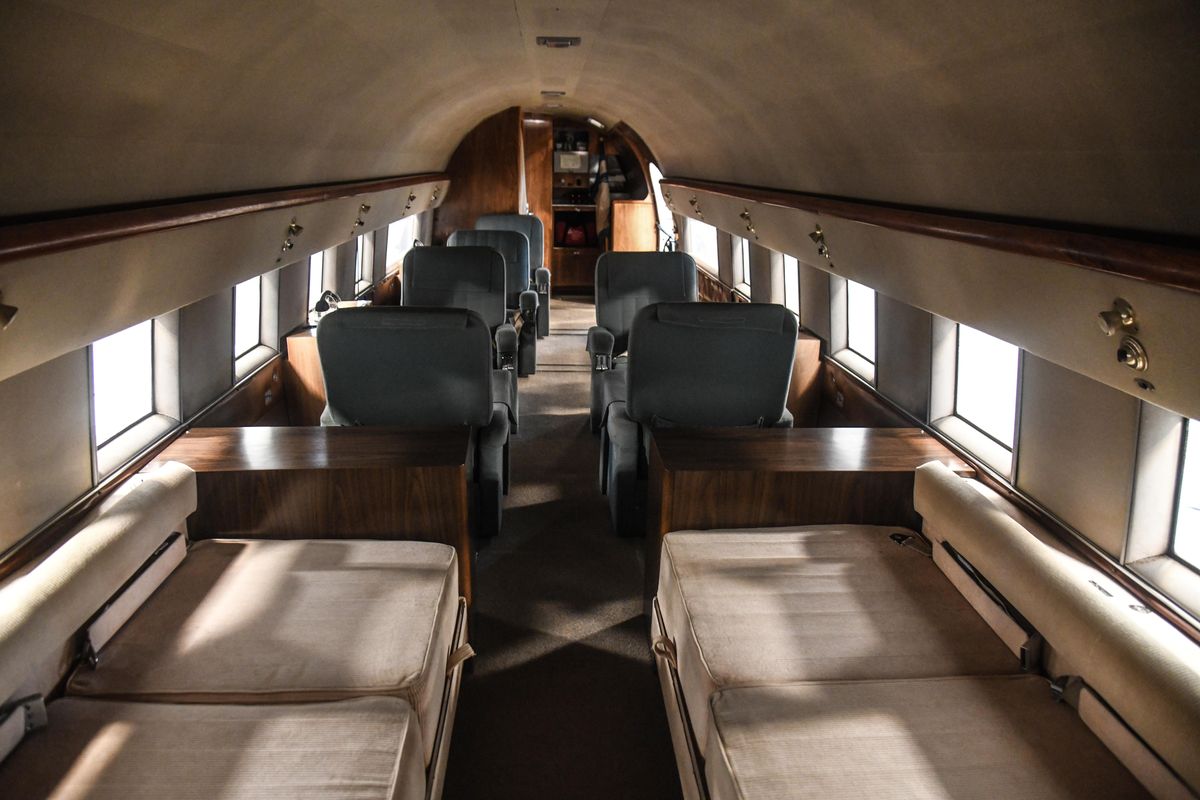 The interior of the Douglas DC-3 on display at the Historic Flight museum, Tuesday, Dec. 17, 2019, at Felts Field. (Dan Pelle / The Spokesman-Review)

“The DC-3 is wide open,” said John Sessions, the Seattle businessman behind the museum and foundation, which he founded in 2003. “You can go inside and take a nap on one of the beds.”

Sessions, who has kept a collection of vintage aircraft on display at Paine Field in Snohomish County for years, opened the Spokane museum to educate people on the “golden age of aviation.”

“You’ve got Lindbergh on one end and Sputnik on the other,” he said. “So, lots to talk about.”

In 1927, Charles Lindbergh was the first person to fly solo and nonstop across the Atlantic Ocean. For the 33-hour journey, Lindbergh’s top speed was 120 mph. Thirty years later, in 1957, the Soviet Union launched Sputnik, the first artificial satellite, and began the Space Age.

Currently, Sessions has a motley collection of aircraft on display – all restored to their heyday glory.

There’s the amphibious Grumman Goose, which was designed in 1936 for wealthy commuters on Long Island who worked in New York City. Sessions’ craft was used in California and the Caribbean before it headed to Dutch Harbor, Alaska. Now, it’s emblazoned with the words “Whidbey Island.”

And there’s the Travel Air 4000, a biplane from 1927 that was flown by a Texan named Harlan Hill before he crash-landed in a field. The plane is painted to commemorate the National Air Races, when 100,000 people came to Felts Field to view the finish of the New York-to-Spokane race.

And there’s the P-51B Mustang, which saw 700 hours of combat flying during World War II. It flew four sorties on D-Day and “engaged in furious dogfights with the Germans,” according to the museum. Seven “mission symbols” on its side detail the number of Nazi aircraft it took down.

Kevin Hannan, who lives southwest of Spokane in the Scablands, was in town to grab lunch with his daughter and visit the museum. The airy hangar and impressive aircraft clearly had his attention, but it was the DC-3 that really grabbed him. He flew a DC-3 when he was young.

“You never felt unsafe in it,” he said. “It was always one of my favorites.”