Load management, commonplace in the NBA, has found its way to Gonzaga.

The top-ranked Zags gave Killian Tillie the night off against Detroit Mercy on Monday with two West Coast Conference games coming up later this week.

Coach Mark Few said it was planned and affords the senior forward additional rest following a six-day break from practice over the Christmas holiday.

That opened the door for freshman Drew Timme to become the eighth Zag to start this season, but it was lineup mainstays Ryan Woolridge and Filip Petrusev that worked over the Titans in a 93-72 victory viewed by 6,000 at the McCarthey Athletic Center.

Woolridge made his first seven shots, four behind the 3-point line, and finished with a season-high 21 points, eight assists and six rebounds. Petrusev had 22 points in 25 minutes. He made 8 of 11 field-goal attempts and 6 of 9 free throws.

Timme hit all five of his shots and finished with 13 points and seven boards. Freshman forward Anton Watson added 11 points, and three other Zags contributed at least seven.

“We just thought if we could give a really good space here, really kind of see if the thing (knee) will calm down a little bit,” Few said of Tillie. “We’ve got some nice options we can go to. Drew certainly deserves the chance. He’s been giving us great effort, not just in games, but in practice. I don’t think he’s missed a rep.”

This game went about as one would expect between one of the nation’s top offenses and an opponent that struggles defensively.

Gonzaga (14-1) had no trouble getting open looks inside or outside. The Titans (2-12) opened in zone, but the Zags scored on their first six possessions.

Petrusev did nearly as much damage in the lane against shorter defenders. He had 16 points by halftime, six at the free-throw line, to go with Woolridge’s 17 points.

Woolridge may have been better at the defensive end. He guarded Titans’ scoring machine Antoine Davis, who averages 25.2 points and has the green light to shoot or create off the dribble.

“He’s an elite scorer,” Woolridge said. “We knew that we’d rather have him shoot hard 2s than hard 3s.” 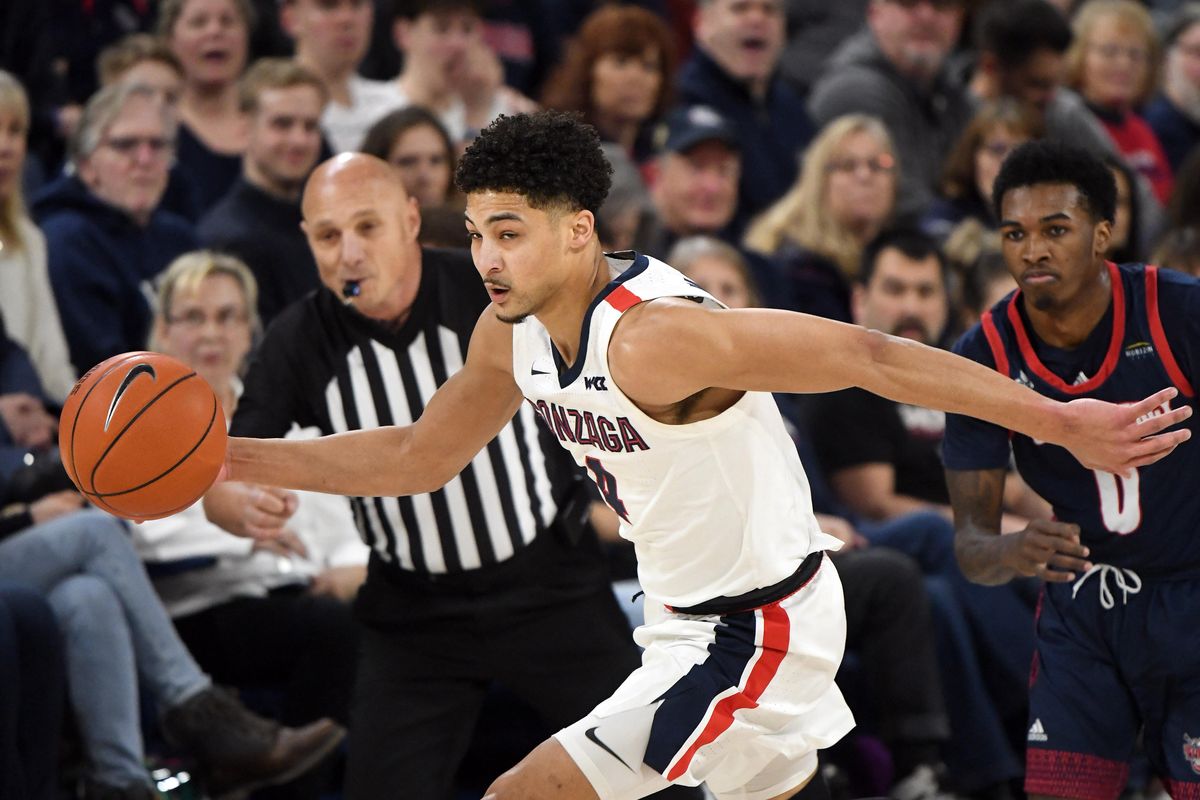 Meanwhile, Gonzaga connected on 73 percent of its first-half shots, including 63.6 percent on 3-pointers.

It didn’t get any better for the visitors at the outset of the second half. Gonzaga scored the first 12 points and led 65-37 after Woolridge’s fastbreak layup.

But Davis and the Titans were persistent. The sophomore point guard dropped four 3-pointers and Detroit Mercy trimmed the deficit to 19 on a pair of Davis free throws with 6:07 left.

Timme scored two buckets inside and Admon Gilder made one of his three 3-pointers as the Zags pulled away. By game’s end, Gonzaga piled up 42 paint points to go with 10 3-pointers. The Zags scored 21 points off Detroit Mercy’s 14 turnovers.

“When we put the ball in the right place and in the right guys’ hands we can shoot the ball,” Few said. “In the second half we got a little too trigger happy and took the least path of resistance a little bit.”

Davis finished with 31 points and received a nice ovation when he checked out in the closing minutes.

“It was a challenge with how much freedom the Davis kid had,” junior wing Corey Kispert said. “He got hot there at the end, but we stayed the course and got the ball into our bigs and they delivered and Ryan had a great first half.”