Check it out at kettlesmap.com/. To see a similar and completed project visit methowmap.com/.

Visit landscouncil.org/donate/. In the comments box note that your donation is for the “Kettles Map Project.”

It started, as it often does in America, with a long drive west.

Brittany Aäe was traveling from Colville to her home in the Methow Valley along Highway 20 in August 2016. As she gained the Kettle Crest via the 5,500-foot Sherman Pass, the new mother felt compelled to stop.

“I had a 3-month-old,” she said. “The newborn daze is just this kind of rough, rugged trench-warfare period. I was struggling with my mental health and just needed to organize myself.”

She got out of her car, the spindly and densely packed trees of the Colville National Forest all around. And that’s when a voice in her head told her, “You’re going to run the fastest known time out here. And you’re going to contribute to conservation.”

And thus, in a roundabout way, the Kettles Map Project was born. 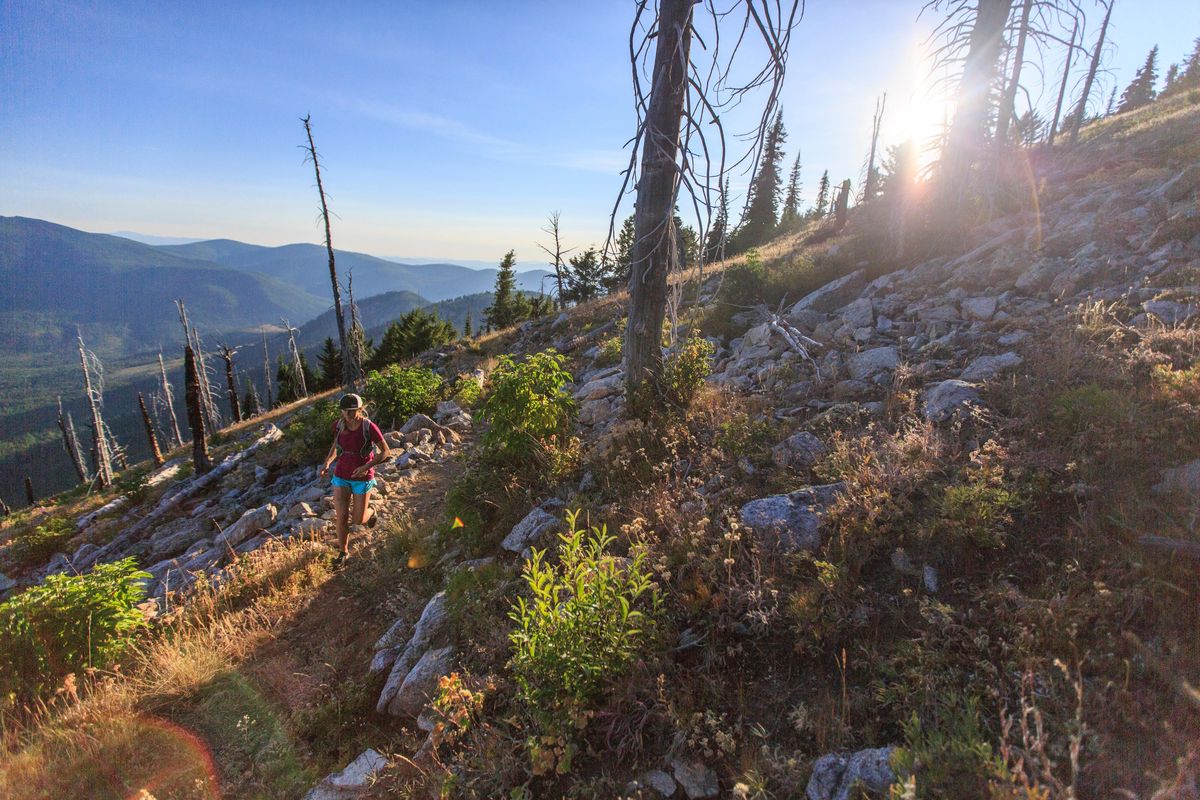 Aäe is an endurance mountain athlete. She loves doing long, unsupported runs through the high country. After her epiphany on the pass, she decided she wanted to run the crest.

So in 2017, on the day of the total eclipse, she ran the entirety of the Kettle Crest, all 44 miles, with her running buddy David Moskowitz .

While running with Moskowitz, a wildlife photographer and conservation advocate, she realized something.

“The Kettles are this tiny microcosm of all the conservation issues facing the Northwest,” Aäe said.

Consider: Ranchers graze their cattle on federal allotments. Wolves roam the woods, sometimes killing cattle. The Colville National Forest produced the most board feet of lumber in 2018 in the entire nation. An updated forest plan may create a new wilderness area, part of it along the crest. Hunters flock to the crest during the fall big game seasons. Mountain bikers, runners, backcountry skiers and others recreate in the area. Historically, the crest was prime habitat for caribou, lynx, wolves and even antelope. And forest fires have burned large swaths of the thick forest in recent years.

“Both of us were really intellectually turned on by the area,” Aäe said.

And yet, the maps they were using were years out of dates. Many of the marked streams were dry. In fact, Aäe contracted giardia drinking out of a cattle trough.

“The Kettles are what is referred to by cartographers as an unmapped region,” Aäe said.

After her 2017 run with Moskowitz, she returned in 2018 on the summer solstice to run the route solo. Traveling quickly, and alone, through the mountains is her favored activity.

For Aäe, it felt like a running first ascent, moving through an unmarked and unknown area of the world. Making it up as she went.

She finished that run. And again, fate struck.

Two days after completing the run, she was at the co-working space she uses in Winthrop, Washington, when she saw a man with maps spread across his workspace.

That man was Marc Rothmeyer.

Still high from her run the previous day, Aäe approached Rothmeyer and pitched him a nascent idea: Let’s map the Kettle Range.

Rothmeyer has made maps for more than 25 years, specializing in recreational trail maps, of which he’s made more than 50.

Part of what sets Rothmeyer’s maps apart from other services, he said, is that during the map-making process someone hikes every mile of trail with a GPS device.

“We actually hike these trails,” he said.

Normally, companies, land managers or other groups pay him for his service. However, he’s done a handful of “passion projects.”

He’s working on a map of the Khumbu Valley in Nepal.

When Aäe approached him at the co-working space in Winthrop, he wasn’t sure what to think. But he’d heard good things about the Kettle Crest and her enthusiasm was infectious.

“She was compelling enough,” he said.

Two weeks later, he visited the range and fell in love.

“The Kettle Crest is a very special area,” he said.

Solitude is still the name of the game, with none of the crowding and overuse found in the Cascades or other charismatic mountain ranges. As if to highlight this, the Colville Forest’s history website is titled “an overlooked treasure.”

For a mapmaker, the Kettles offer another tantalizing treat.

“It’s kind of this unmapped area in our backyard,” he said.

Geographically, the area is hard to access, with no major interstates or highways nearby. Decades of cuts to the Forest Service’s recreation budget have left much of the crest poorly maintained and mapped.

Since the founding of the Colville National Forest in 1906, the area has mostly been seen as an industrial resource with logging and ranching being the main activity on the public lands. In fact, the forest is named after Andrew Colville, the British governor of the Hudson Bay Company.

That’s changed over the decades, with more concern given to recreational pursuits and more collaboration between the Forest Service and user groups. But budgets remain tight, said Franklin Pemberton, a spokesman for the Colville National Forest.

The Kettles Map Project’s goal is to create comprehensive and accurate guide to the range, Aäe said. The mapped area will extend from Republic, up and over the crest to near Kettle Falls. The southern-most boundary of the map will be the Colville Reservation and the northern-most boundary will be the terminus of the Kettle Crest trail.

“We will map every trail within the bounds of the map,” Rothmeyer said. “The water sources alone are huge. That’s one thing we’re going to be looking at closely when we map. Reliable water in late August.”

While Rothmeyer creates the map using GIS, Aäe will ground truth the entire thing, running or walking the trails using GPS to mark obstacles, water sources or other geographic features .

“I’m going to have to run all of the trails that are going to appear on the map with a modern GPS unit,” she said.

If all goes according to plan, the map will be published in the fall of 2020. Simultaneous to the creation of the map, Rothmeyer will create a website on which land managers and users can update trail descriptions and conditions.

Rothmeyer completed a similar map project in the Methow Valley.

Whittaker, who lives near a Kettle Crest trailhead, said he still gets lost.

“I’m a local and I don’t know where the trailheads are,” he said.

The project launched Nov. 27 with a GoFundMe campaign asking for $20,000. Organizers raised just a fraction of that.

Rothmeyer and Aäe are confident they will raise the money needed to complete the project, whether that’s through donations or grants.

The Spokane-based Lands Council is acting as the fiscal sponsor.

By mapping the area, they hope they can raise awareness of some of the issues facing the range.

“I think in this case, the more people that know about it the more likely it’s going to be protected,” Rothmeyer said.

All the high-minded ideals of the project aside, Aäe has a simpler more personal motivation. One stemming from that long drive in 2016.

“I was submerged in this terrible postpartum anxiety and the Kettles ended up being this amazing healing force,” she said. “I feel like I have this obligation to help the Kettles.”