Hundreds of people in shorts, bathing suits and sandals, shivering and and their teeth chattering in below-freezing temperatures, then willfully sprinting into the frigid waters of Lake Coeur d’Alene. Yep, it’s the Coeur d’Alene Polar Bear Plunge.

The annual bone-chilling New Year’s Day tradition continued on Tuesday, with temperatures hovering at about 30 degrees, and water about 10 degrees warmer – much to the tortured screams and beaming exuberance of its swimmers. Many came dressed in beach attire, while others adorned costumes that were quickly discarded before the plunging could commence.

“I always wear something silly,” said 55-year-old Ken Martin, who estimated he’s participated in every plunge for the past 28 or 29 years. “Usually I wear a jungle pith helmet.”

Minutes before the plunge was set to commence, the snow-salted shore of Sanders Beach filled to the brim, though most seemed unaware they were partaking in a milestone plunge.

This New Year’s Day marked the 40th year the event has been held at Sanders Beach. And there to celebrate were friends and architects Bryan Riba, Pat Mitchell and Rob Langstaff, who along with two others, created the plunge in 1979 while students at Coeur d’Alene High School.

“In our younger years we were more competitive,” said Mitchell. 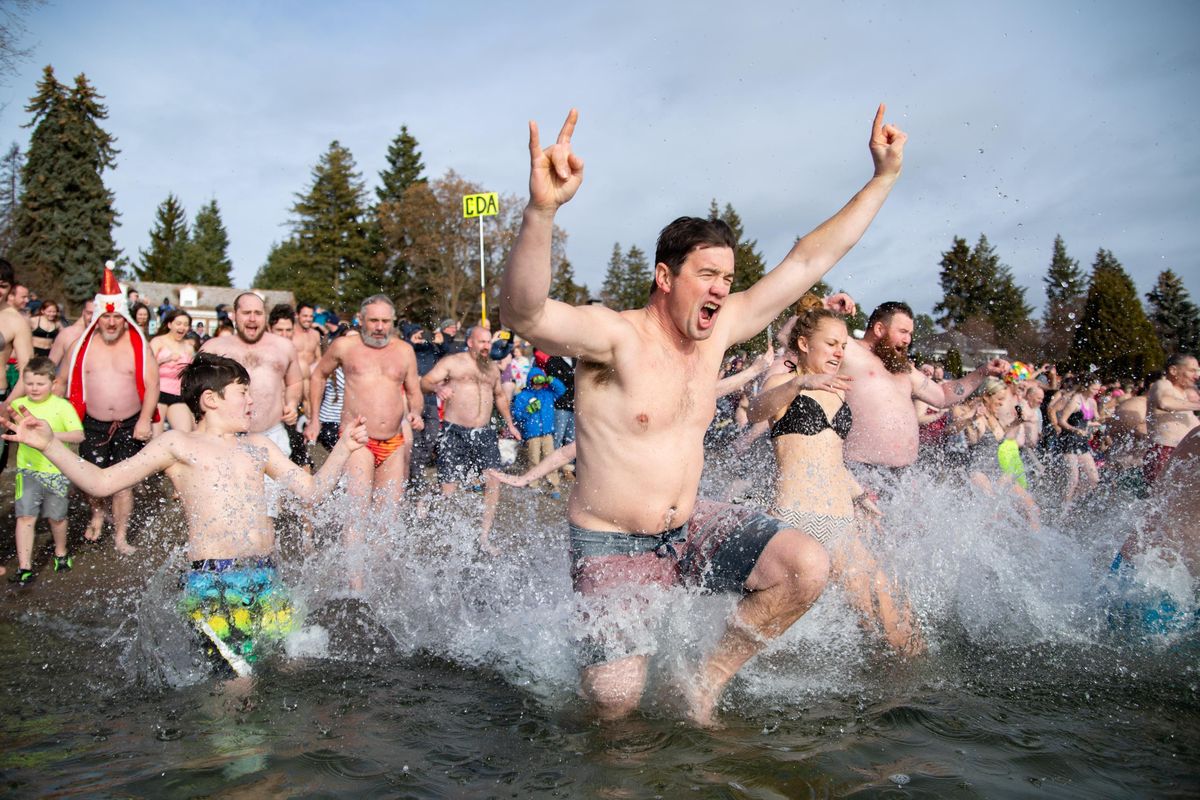 Polar bear plunge participants splash their way into the new year on Sanders Beach in Coeur d’Alene, Idaho on Jan. 1, 2019. The water temperature was 40 degrees Fahrenheit with an air temperature of 29 degrees. (Libby Kamrowski / The Spokesman-Review)

Thirty minutes before it was set to start, Riba, who came from O’Fallon, Illinois with his son, made it a point to check in with other participants and bestow some wisdom, even if it was several decades old: don’t dip your feet in before as it’s better better to run straight in, and don’t disrobe too early.

“It’s just gonna be exciting,” said Riba, minutes before he was set to enter the water. “To be a part of the experience.”

By noon, hundreds of people ran screaming and yelling into the lake, where they dunked their heads and quickly retreated. Many stayed behind, holding up a phone or camera to record the chaos.

“I hate Idaho,” said 22-year-old Connor Guin as he took off his shoes. Once back on shore after letting out a few impassioned screams, the first-time participant turned toward his girlfriend’s cell phone, which was live streaming the ordeal on social media.

“I can’t feel any of my phalanges,” he said to no one in particular. “My extremities are numb.”

While many were there for the first time, several were die-hard polar bear aficionados, including Stephen and Jennifer Garwick and their daughters 9-year-old Adley and 8-year-old Piper.

Jennifer, who refers to herself as the “wimp,” since she has no desire to partake, said her daughters have been going in for the last three years. Though this year was the first time they went completely under.

“It was amazing,” said Adley, wrapped tightly in a towel. Her sister was less impressed.

“I was freezing,” Piper said.

Twenty minutes after the first wave of swimmers came out of the lake, the beach was all but cleared, save for a few stragglers sitting on the beach, staring at the low winter sun over the silvery surface.

Only two swimmers remained in the water – much to the delight of onlookers.

“I don’t even have goosebumps,” said 75-year-old Rick Klin, a longtime member of the Libby, Montana Polar Bear Club.

To his right was 30-year-old Jonathan Windham, a delivery bicyclist at Jimmy John’s sandwich restaurant in downtown Spokane, who can often be spotted riding his bike in a T-shirt and shorts, no matter what the thermometer reads.

Windham, also a polar bear veteran, said he planned on being in the water for 62 straight minutes.