Aveline Jones plodded in her yellow shoes, pink pants and black coat with her hand firmly in her mother’s grasp Monday as they joined about 3,000 other marchers to celebrate the life and legacy of Martin Luther King Jr.

Camille Jones, 23, of Airway Heights, said her nearly 3-year-old daughter recently asked why she and her family would participate in the annual march, which started with speeches at the Spokane Convention Center before finishing with a march through downtown.

“I told her, ‘This means so much to us,’ ’’ Jones said. “We need to appreciate and always remember and remind those in the next generation. We need to keep speaking up when things aren’t OK.”

The event included speeches from Mayor David Condon and the Rev. Percy “Happy” Watkins, who recited King’s “I Have a Dream” speech from memory.

Feruz Tikue, a sixth grader at Grant Elementary, read a speech that was co-written by the school’s Associated Student Body cabinet. 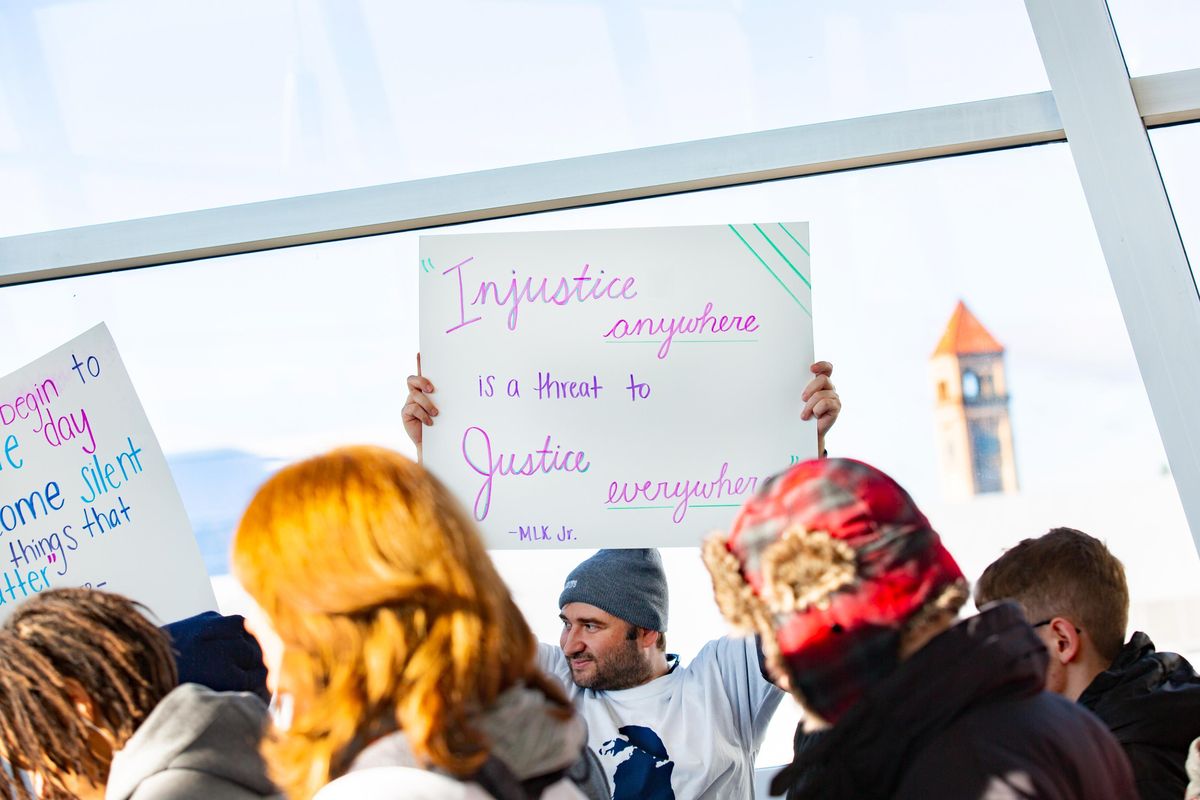 Joseph Martin holds up a sign while crowds exit the Spokane Convention Center for the Martin Luther King Jr. march on Monday, Jan. 21, 2019. The march was preceded with an event there that had an estimated 3,000 people in attendance. (Libby Kamrowski / The Spokesman-Review)

Spokane police had a robust presence and spectators were shepherded through metal detectors prior to the speeches at the Convention Center. Capt. Brad Arleth said he was unaware of any issues during the march.

Condon asked the crowd to “remember the legacy of Dr. King and so many others who campaigned for peaceful change, inspiring our nation to be better, more peaceful and more just.”

“We did not get here alone,” Robinson said. “This is about all of us or none of us. It’s for the advancement of all of us.”

He also praised the “shifting and uprising in women” that occurred in 2018.

“I think if Dr. King and many of the other patriarchs of the Civil Rights era were alive right now, one thing they would all be saying is, ‘What took us so long. Yes, it’s been a long road. Yes, we still have a long ways to go.’ ”

Whitworth professor and motivational speaker Stephy Nobles-Beans nearly brought down the house with a speech in which she thanked everyone for standing together in unity.

“Dr. King said that everybody can be great because everybody can serve. He said life’s most urgent and persistent question is this: ‘What are you doing for others?’ ” Nobles-Beans said. “Spokane, let us come together in unity.

Then Watkins, walking slowly with a cane, made his way to the podium. He mixed King’s speech with messages for his adopted city.