Park in the Spokane county maintained parking lot a hike up the road for a short distance.

Pass through the gate and enter the conservation area. From there follow the trail until you come to an open meadow at the base of a hill. Take the obviously maintained trail to the left. To the right there is a steep, heavily eroded former road often used by climbers to access Big Rock directly. This is not a pleasant hike and further erodes and already damaged area.

Follow the trail up, passing through several switchbacks until Big Rock becomes visible. The trail is 2.5 miles roundtrip and gains about 600 feet of elevation. Views of the Palouse are inspiring.

The Dishman Hills Conservancy will be leading to tours of the 120-acre addition. Register at DishmanHills.org

Standing on the southern edge of the Iller Creek natural area, with the pastoral beauty of the Palouse spread below and Big Rock’s eye-catching granite face anchoring the upward slopes, it’s hard to imagine anything threatening this landscape.

The area has become a mainstay of Spokane recreationists. With easy access from downtown, Spokane Big Rock is a popular after-work destination for hikers, bikers and climbers.

And yet, this section of the Rocks of Sharon area was, up until December, privately owned and potentially developed.

“The whole experience of Rocks of Sharon (could have been) completely different,” said Jeff Lambert, the executive director of the Dishman Hills Conservancy during a hike Monday.

Most hikers and climbers that accessed the popular Spokane-area conservation area had no idea that the first section of trail from the Stevens Creek trailhead passed through private land. The land, which has commanding views of the Palouse, would have been an attractive site for a developer to build, Lambert said.

“The purchase they made there is crucial to preserving that trail experience,” said Paul Knowles, the Spokane County parks planner. “Because right now you park at the county trail head and hike up a public right of way for some distance.”

The purchase is part of a larger five-year campaign aiming to add 1,000 acres and three trailheads to the existing Dishman Hills Conservation area. The entire project is estimated to cost $5.7 million and hopes to “protect the Wild Heart of Spokane” from development.

The 120-acre Big Rock addition, as it’s being called, is the first property purchased in that five-year effort. 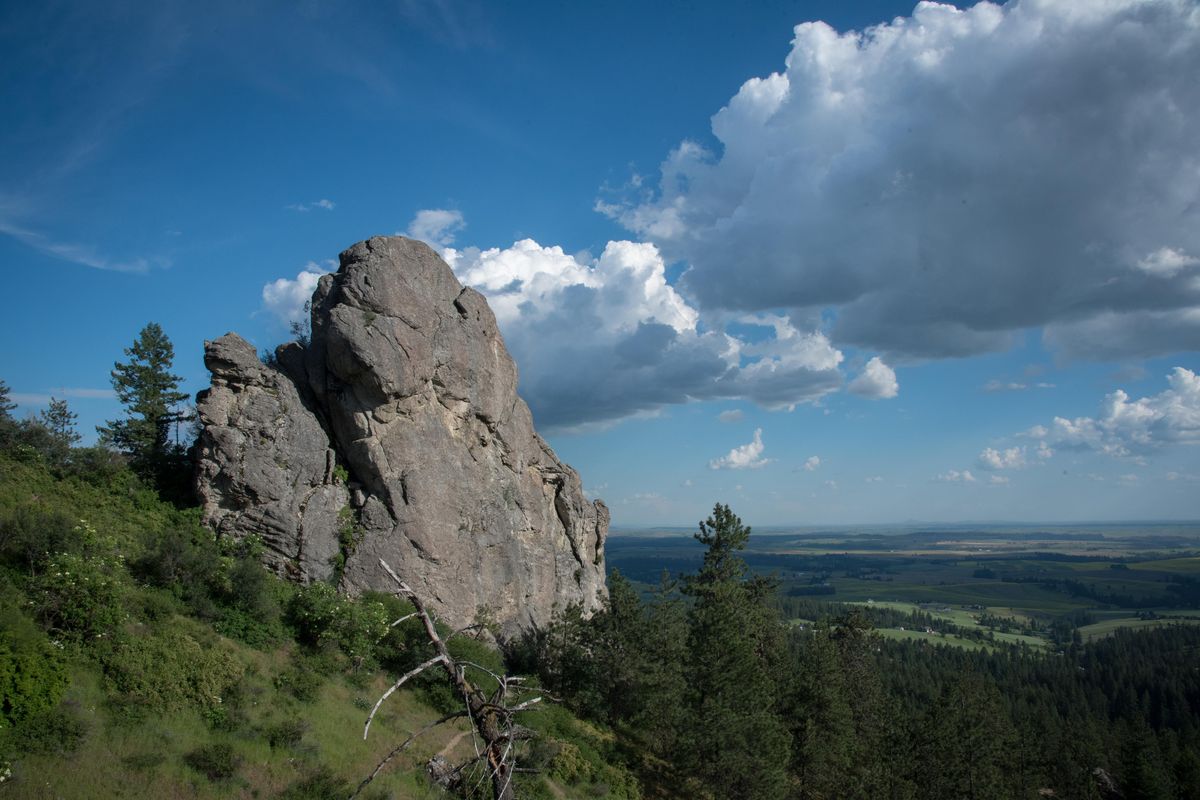 Big Rock as seen on Monday June 17, 2019. In December, the Dishman Hills Conservancy purchased 120-acres just south of Big Rock. The parcel was privately owned and could have been developed, drastically changing the ecology and mood of the Big Rock area. (Eli Francovich / The Spokesman-Review)

Beyond securing a beloved recreation area, the land is ecologically important.

“Connectivity and size really matter if you’re concerned about mainlining natural communities,” said Art Zack, a retired forest ecologist. “You will not only get more robust populations, you will get more diverse populations too.”

In the late winter and early spring, the southern-facing slopes clear of snow faster, thus giving big game much needed early-season forage. There are also plants, like bitteroot, that only grow on the southern slopes. And recently an area birder identified more than 30 bird species during a casual two-hour hike.

Plus, the headwaters of Stevens Creek start on that slope flowing downhill eventually connecting with Hangman Creek and the Spokane River.

“These slopes right here are the headwaters,” said Zack. “That’s where it all starts. So it’s really important in maintaining the health of that watershed to protect the headwaters.”

The parcel was logged 25 years ago, Lambert said, but much of it remains eroded and unhealthy. Rehabilitaing some of the slopes and old roads will be the first priority. Eventually new trails will be put into the 120 acres, adding to the area’s already extensive trail network. The area features wetlands, meadows and even an old homestead site, Lambert said.

“We will be able to create a trail system that takes advantage of the wetlands, the views and the meadows,” he said.

The purchase of the property was years in the making, Lambert said.

“The negotiations were done in a cordial fashion in less than 30 years,” he joked.

The entire effort represents the Dishman Hills Conservancy larger focus of identifying important properties for conservation well before they are slated for development. Lambert and others start building relationships with the landowners years in advance.

“It removes the crisis factor,” he said.

With less than 10 percent of Spokane county as public land, and with an growing population, preserving those spaces early is key. Lambert points out other popular areas, like Beacon Hill, that are at risk of being developed after years of ad-hoc agreements between land owners and recreationists.

The Dishman Hills Conservancy was founded in 1966. The conservancy, alongside Spokane County and the Washington Department of Natural Resources, manages the roughly 3,000 acres in the Dishman Hills area. The ultimate goal is to connect the northern end of the natural area in the Spokane Valley with the southernmost section by the Stevens Creek trailhead.

Already, the Conservancy has done yeoman’s work purchasing and protecting some of Spokane’s most iconic natural areas.

Chris Kopczynski, the current president of the board of directors, remembers running and climbing in the Dishman Hills area in the 1970s. Once, while running, an angry landowner chased him in a truck. Kopczynski said he didn’t know at that time that he was on private land.

“For me that was the spark,” he said. “Everything in America is owned by someone, unless a team of people come together.”

The newest 120-acre addition brings the conservancy one step closer to its ultimate goal.

“You won’t have 12 houses here,” Lambert said, Monday, while looking out over the protected land.