People riding scooters rented through apps such as Lime will no longer be able to ride on downtown sidewalks. But they won’t be required to wear helmets under a new set of rules approved Monday by the Spokane City Council.

Under the new law, companies that rent out scooters and bikes through apps don’t have to provide helmets and anyone who rents their products would not have to use them. The helmet issue was a sticking point that left lawmakers concerned that the city wasn’t enforcing its own rules.

Scooter riders, many of whom rode on the sidewalk during last year’s popular pilot program in the city, also would have to ride in the street in the downtown area. 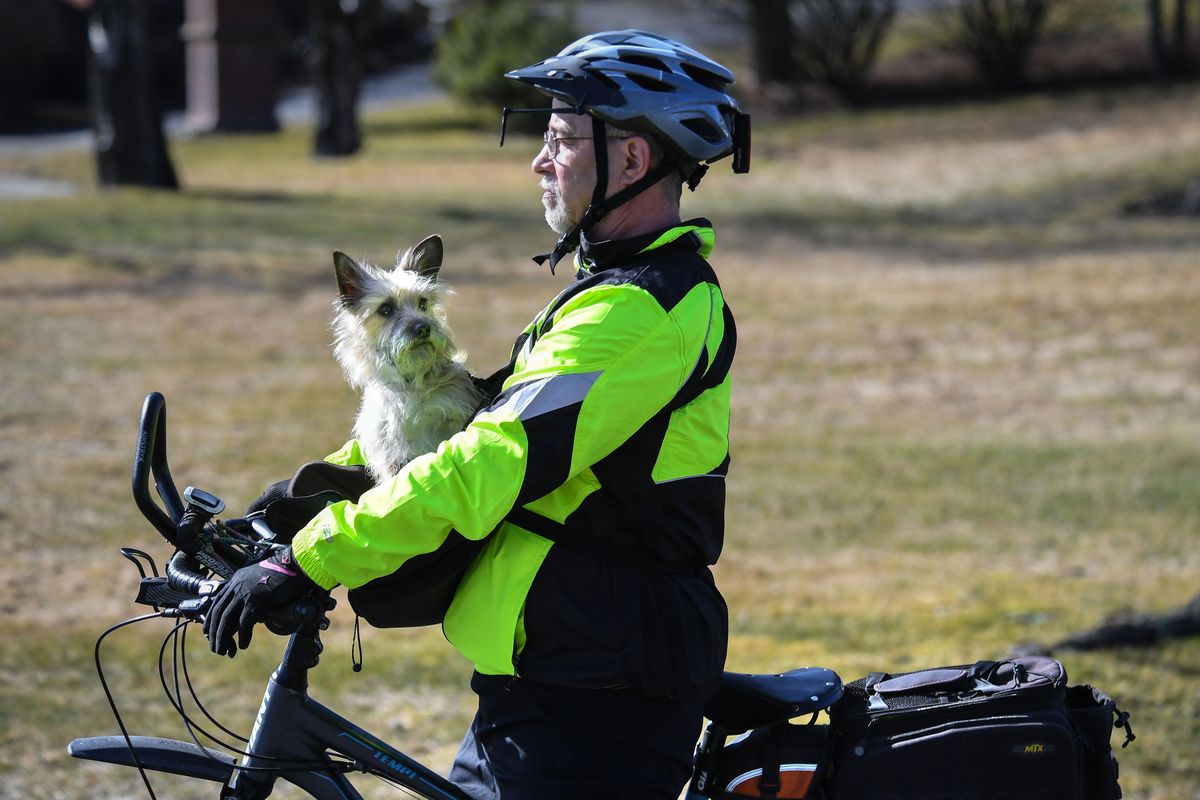 Russ Peters, Spokane Bicycle Club board member, pauses on 37th Avenue at High Drive with his dog, Ginger, Thursday, March 21, 2019, in Spokane, Wash. It was the first time Peters had taken his rescued dog for a ride on the bike. (Dan Pelle / The Spokesman-Review)

City Council President Ben Stuckart said most people, including himself, were not wearing a helmet when they were riding lime scooters last fall. He said the city shouldn’t pass laws that council members don’t follow.

Stuckart said he agreed with many of the people who publicly testified, saying the city should get rid of its helmet law altogether. However, he said before the council abandons its helmet law, it needs to gather community input.

Spokane police Sgt. John Griffin said officers stopped between 1,500 and 1,600 riders for not wearing helmets. Most were warned, but 36 were ticketed. Now that people who obtain scooters and bicycles rentals through an app are exempt from the city’s helmet law, Griffin said some officers may not stop or cite people who aren’t wearing a helmet at all.

“We don’t want to be in a situation where we’re unequally enforcing the law,” he said. “That’s not where we want to be, ever.”

City Councilman Breean Beggs said the law would not be unequally applied because the city has asked companies that provide bikes and scooters through apps to slow them down from their maximum speeds in certain areas of the city, such as Riverfront Park. That makes them a different technology than traditional bicycles.

The scooters operate on a GPS system and app developers can set speed limits which automatically slow scooters while inside the boundaries of areas like Riverfront Park and allow the scooter to return to full speed once it exits the boundaries.

Carving out a helmet exception for bikes or scooters rented through an app could also create a bad example for people in the community, said Kim Thorburn, the county’s former health officer and supporter of the city’s original helmet law.

While helmets are not 100 percent effective at preventing injury or death, they can offer some protection for cyclists and scooter riders, especially those who ride in the street, she said.

“If you’re going to ride a bike, for your own protection you should be wearing it. And a rule is a way to say that,” she said.

Every councilmember except Mike Fagan voted in favor of the proposal.

John Lemus, a city human rights commissioner who owns his own electric scooter, said he’s been nearly pushed off the road by drivers who weren’t paying attention to bikes or scooters. He said requiring people to ride scooters in the street puts them in the path of drivers who aren’t willing to accommodate other forms of transportation.

“I think you’ll need to look into this once a couple people get hit by drivers who are road raging or don’t think we should be there,” he said.

This story was updated on Tuesday, Mar. 26 to include Spokane City Council’s final vote.