By Adam Shanks
The Spokesman-Review

The Spokesman-Review asked Ben Stuckart and Nadine Woodward, Spokane’s candidates for mayor, a series of questions to learn their positions on important issues that may not make it to a debate stage or candidate profile. Their answers have been edited and paraphrased for brevity. Quotes are directly from their responses. 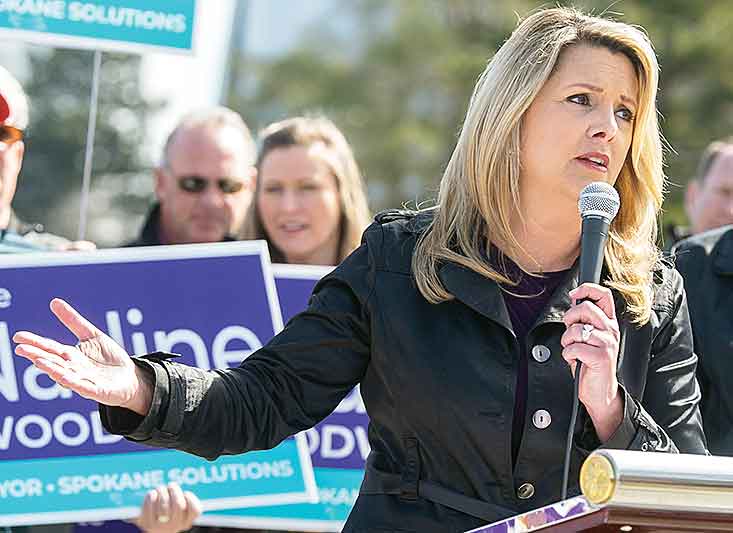 Education: Graduated from Hudson’s Bay High School in Vancouver, Washington in 1980. Graduated from the University of Portland in 1985 with a bachelor’s degree.

Work Experience: Was a television news broadcaster in Spokane for 28 years, first at KREM before moving to KXLY in 2010. She left the industry earlier this year and is vice president of Memories by Design, a video production business in Spokane. 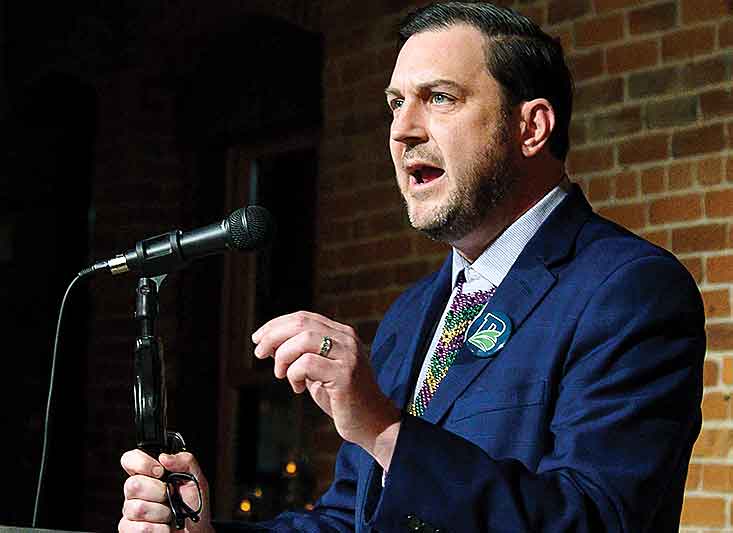 Do you support Spokane’s red light camera and speed camera program and would you support expanding it to other locations?

Stuckart said they work and decrease crashes. He added that the revenue is allowing for more traffic safety measures to be implemented in neighborhoods. He also said it’s the most popular program in city neighborhoods.

Woodward said she can see both sides, but “if it provides safety to the neighborhoods and schools, yes.”

Would you keep Craig Meidl as the police chief?

Stuckart declined to answer personnel questions, including this one, before the election.

Woodward also declined to answer but said, “Meidl has a lot of respect from his department.”

Would you keep Brian Schaeffer as the fire chief?

Do you support City Charter provisions giving the Spokane Park Board control of Spokane’s park system?

Stuckart said he has had mixed feelings on the Parks Department’s independence in the past, but believes everything is now on the right track. As a result he said he would not try to change the city charter.

Woodward said the provisions give the Park Board a lot of power, but added, “I would have to look at that.”

Did you support the tax voters approved early this year to increase the number of police officers and prevent some cuts to firefighting staffing?

Stuckart noted that he not only supported but also sponsored the proposal. With eight years of experience working on the city budget, Stuckart said that the city would not have been able to afford new police officers without the levy.

Woodward said she supported hiring more officers, but not through the public safety levy. She has advocated for funding additional police officers by making cuts to other parts of the budget.

How do you feel about the outcome of the redesign of North Monroe Street and East Sprague, which shrunk the roadway to three lanes?

Stuckart said those are the best street projects the city has completed during his time in office, leading to a decrease in crime in those neighborhoods and spurring business growth nearby.

Woodward said, no, she does not believe the city should be narrowing its arterials.

Should more one-way downtown streets be converted to two ways?

Stuckart said having more two-way streets downtown would benefit businesses. One-way streets are designed to get motorists from point A to point B, he noted. “Your retail district should be a walkable district,” he said

Woodward said she had no opinion.

As mayor, would you look to limit Border Patrol's ability to operate within the Intermodal Center, per rules set by a law passed by City Council in 2018?

Stuckart said that’s the law and that “the mayor’s job is to enforce the law. Anybody that says that they’re not going to follow the law is not fit for office.”

Woodward said she: “supports laws that protect our community. We live within 100 miles of a border, which puts Spokane under federal jurisdiction for those searching” the Intermodal Center.

Do you support the police ombudsman’s call for more authority in publishing closing reports following investigations into officer conduct?

Stuckart said he absolutely does.

Woodward said she supports the ombudsman, police oversight and body cameras, but added, “I have to think hard about expanding the authority of the ombudsman.”

Do you believe the Spokane Regional Clean Air Agency has been too strict on asbestos regulations?

Stuckart said they are too stringent at times, and should be more timely when levying fines. “They should not be able to tell somebody that you have a fine, and that affects your financing, without telling you what that fine is,” Stuckart said.

Woodward said she has no opinion, but that the agency is doing “a great job.”

Do you believe the city should participate in litigation against opioid manufacturers?

Stuckart said he does, noting that he was proud to sponsor a resolution calling on the city to participate in litigation against opioid manufacturers.

Woodward said she is glad the city has taken steps to join litigation against pharmaceutical companies.

Do you support the Central City Line?

Stuckart said it’s going to be a “game changer” for Spokane and enable multimodal options for transportation throughout the city.

Woodward said, “I’m anxious to see the impact that it’s going to have downtown. If it proves to be popular and a lot of people use it, maybe we look at expanding it."

Do you believe fluoride should be added to the city's drinking water supply?

Stuckart said, “Yes, it’s the most impactful thing we can do for dental health of young people in our community.”

Woodward opposes adding fluoride to the city’s water, noting that voters have previously turned down such proposals.

Planned Parenthood has drawn protests. Are those protests protected by free speech, or a safety hazard that violates city noise ordinance?

Stuckart said, “We should be equally enforcing the law, and if they are violating noise ordinances, they should be cited.”

Should homeless shelters be allowed to discriminate based on gender identity?

Stuckart said not if they use any public dollars.

Do you believe human activity impacts climate change, and do you believe the city should make investments to lower Spokane’s carbon footprint?

Stuckart said he believes the science showing humans’ impact on climate change and that a position within the mayor’s cabinet should be dedicated to sustainability.

Woodward said she supports measures that lower the city’s carbon footprint, especially those that change people’s behavior with rewards and incentives, not taxes and penalties.

What is your stance on propositions 1 and 2?

Stuckart said he is against Proposition 2’s ban on an income tax, calling it a “solution looking for a problem.” He also opposes Proposition 1, which would open collective bargaining to the public, saying such negotiating conditions can not be imposed unilaterally and that “bargaining is based on trust.”

Woodward said she: supports the income tax ban, which she calls a “job recruiting tool,” and the proposal to publicize collective bargaining, saying “taxpayers deserve to know.”

Is there adequate parking downtown, and how can it be improved?

Stuckart aid studies have shown there is adequate parking, but that there are too many surface lots and not enough multistory, covered parking garages.

Woodward also pointed to parking studies that have shown there is adequate parking, but said it’s a “great idea” to make the way parking is paid for consistent throughout downtown.

Stuckart said yes. “I think we should be celebrating everybody in our community,” he said.

Woodward declined to say if she supported the decision but said “The library can do whatever it wants and people can protest whatever they want.”

The city passed campaign finance reform laws in 2017 – are they working?

Stuckart said the city’s campaign finance laws are working “as good as they can.” He noted the city cannot prevent the influx in independent expenditures. “What we can control, we’ve done a good job with,” he said.

Woodward said she would look to immediately repeal the ordinance, which she believes unfairly limits business contributions to candidates but allows unions to continue to play a role in elections.

Stuckart said absolutely not, because the process of joining was not transparent and those who have joined have not seen the discounted rates they were promised.

Woodward said she supports “collaboration that creates more efficiency,” so she would study the issue further.

The city participated in an amicus brief filed in support of Boise’s appeal to the U.S. Supreme Court, searching for clarity in a federal court’s ruling on laws against homeless camping. Do you agree with the city's position?

Stuckart said, “The answer is not to arrest people. The answer is to have more shelter space and more supportive housing and long-term low-income housing.”

Woodward said, yes, the case needs to be settled as soon as possible so “it doesn’t hand-tie” states and cities, who do not know what they can and can not enforce.

Would you support safe injection sites in Spokane?

Stuckart said he supports safe injection sites, but noted that adding them is not a city decision and would be up to the Spokane Regional Health District.

Woodward said she absolutely does not support such sites. “It just perpetuates drug use and lengthens an addict’s death sentence,” she said.

Do you support the current design to complete the North Spokane Corridor?

Stuckart said he doesn’t believe it can be changed at this point.

Woodward said she supports the design and believes it will help with traffic flow.

Do you believe laws against sitting and lying on downtown sidewalks should be enforced even when there is inadequate shelter space?

Stuckart said the city’s laws, which currently are not enforced when there is inadequate shelter space, were passed in a bipartisan agreement and should remain as they are.

Woodward said they first need to be enforced as written. She criticized City Council’s past discussion about repealing or amending the laws.

Mayor David Condon has refused to empanel the Sustainability Action Committee, which was created by the Spokane City Council in 2018. Would you empanel the committee as mayor?

Stuckart said doing so is the law and that the mayor should follow the law.

Woodward said there is already a committee that discusses environmental sustainability formed by the City Council. She believes the sustainable energy ordinance adopted by the council “is unrealistic” and would cost homeowners too much money.

Are tax incentives, such as the multifamily tax exemption program, a good way to spur housing development in Spokane?

Woodward supports incentives to create more development, though she’s open to analyzing the value of the incentives. In addressing the city’s housing crisis, she said, “we need to be creative.”