“HOUSTON, WE’VE HAD A PROBLEM” 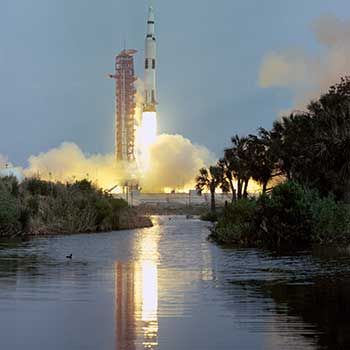 On this date 50 years ago, NASA nearly lost three astronauts when an oxygen tank aboard Apollo 13 exploded en route to the moon. Here’s how the mission unfolded: 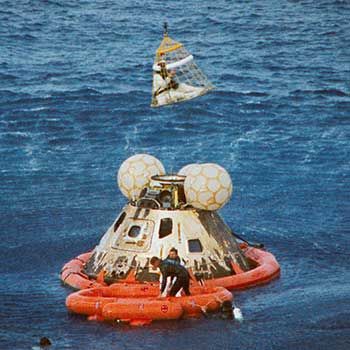 Two hours after reaching orbit, the Saturn V third stage is reignited to propel Apollo 13 toward the moon.

The Apollo 13 command module, Odyssey, breaks away from the rest of the spaceship, turns around and docks with the lunar module, Aquarius, which has been safely hidden away inside the top of the third stage. Odyssey then backs away from the spent third stage, bringing Aquarius with it. The astronauts then settle in for a three-day ride to the moon.

This far, Apollo 13 has been on a path that, if unaltered, would allow it to loop around the moon and return to Earth. But from that path, Aquarius wouldn’t be able to land at its target, the Fra Mauro region of the moon. So the huge engine on the back of the Apollo 13 service module is fired up to change the ship’s path away from a “free return trajectory.”

Shortly after astronauts end an evening TV broadcast, they run a routine procedure to stir oxygen in a tank in the service module. A short circuit causes the tank to explode, which damages a second tank as well. The spacecraft uses oxygen to generate power via its fuel cells, so power levels begin dropping immediately. Realizing their lives are in great danger, the three astronauts move from their dying Odyssey into Aquarius, with the intent of using their lunar module as a lifeboat.

Apollo 13 needs to return to its previous free-return trajectory. However, NASA engineers fear the explosion may have damaged the engine on the service module. They decide to use Aquarius’ lunar landing engine instead. Technicians in Houston work feverishly to write computer code to allow this and then recite it, line-by-line to the crew via radio. The crew punches it in to the shipboard computer. The four-minute, 23-second burn goes off perfectly.

A new problem is detected onboard Apollo 13: The lunar module’s systems were not designed to sustain three crewmen for more than 45 hours. Carbon dioxide begins building up inside Aquarius. There are plenty of CO2 filters aboard Odyssey, but the filters fit a different size scrubber. NASA engineers work out a way to make one type of filter fit into another type of scrubber using ripped-up procedure manuals, duct tape and other shipboard materials. The crew duplicates those efforts to build what they call the “mailbox.” CO2 levels return to normal, but with the ship running on minimal power, temperatures drop to 38 degrees.

The crew begins preparing to return to Earth. They jettison their crippled service module. For the first time, they are able to observe the damage done by the explosion, four days before.

With Odyssey powered up and functioning again on battery power, the crew moves back over to their command module and jettison their lifeboat, Aquarius.

Odyssey splashes down in the South Pacific. The craft is met by the USS Iwo Jima. The astronauts are flown to Honolulu, where President Nixon awards them the Presidential Medal of Freedom.