Seventy-five years ago this week and next, the European phase of World War II finally came to an end as Allied troops neutralized German defenses, liberated captured cities and prison camps and overran most of Germany itself.

Over 5½ years, more than 110 million people would fight in the war that would leave 25.3 million military personnel and 47.3 million civilians dead. And, of course, it wouldn’t be over yet: The war in the Pacific would go on for another three months.

Here’s how the end of the war played out in Europe: 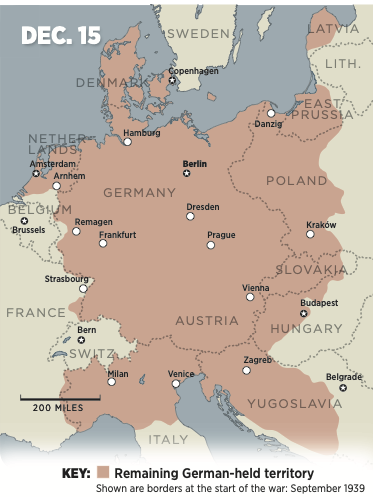 DEC. 17, 1944
With Soviet forces pushing in from the East and U.S., British and other Allied forces advancing from the west, Germany launches a major counteroffensive it calls Operation Watch on the Rhine. It will become known as the Battle of the Bulge.

DEC. 22
German forces surround the 101st U.S. Airborne Division in Bastogne, Belgium. A message is sent to Gen. Anthony McAuliffe requesting his surrender. McAuliffe replies with one word: “Nuts!” The reply has to be explained to the German leaders, who were not familiar with American vernacular.

DEC. 27
Gen. George Patton’s Third Army breaks the siege of Bastogne and rescues the 101st Airborne. The Germans have failed in their attempt to break the lines closing around them.

DEC. 31
On the heels of that failure, Germany launches yet another offensive: Operation Nordwind: An effort to seize Strasbourg, France and cut off Patton’s Third Army. Allied Supreme Commander Dwight Eisenhower rushes to shore up defenses with troops fresh off battles around Bastogne. This would turn out to be the final major German offensive of the war.

JAN. 17, 1945
The Soviet Army enters the ruins of Warsaw and liberates the suburbs from German occupation.

JAN. 27
The Soviet Army liberates the Nazi concentration camp at Auschwitz. The German paramilitary Schutezstaffel, or SS, had evacuated nine days before, taking many of the inmates with them on a death march to Germany and Austria.

JAN. 30
The fast-working Soviet Army reaches the Oder River. It has now liberated nearly all of Poland.

FEB. 4
British Prime Minister Winston Churchill, President Franklin D. Roosevelt and Soviet Premier Joseph Stalin (pictured, left to right) begin eight days of meetings at Yalta on the Crimean Peninsula to discuss how the Allied powers will govern Germany once the war is over.

FEB. 13
The Royal Air Force sends 805 planes to drop 3,900 tons of bombs on the manufacturing and communications hub of Dresden, Germany. More than 1,600 acres of the city center is destroyed in the resulting firestorm. The U.S. Army Air Force bombs the city again the next night.

MARCH 7
The U.S. 1st Army captures Ludendorff Bridge over the Rhine in Remagen, Germany. More than 25,000 troops plus tanks and trucks would cross the Rhine before the bridge finally collapses 10 days later.

MARCH 19
German Führer Adolf Hitler orders the destruction of infrastructure in order to slow down Allied forces. Hitler’s Minister of Armaments and War production, Albert Speer, is appalled by the order. He requests exclusive power to carry it out … and then deliberately does not. 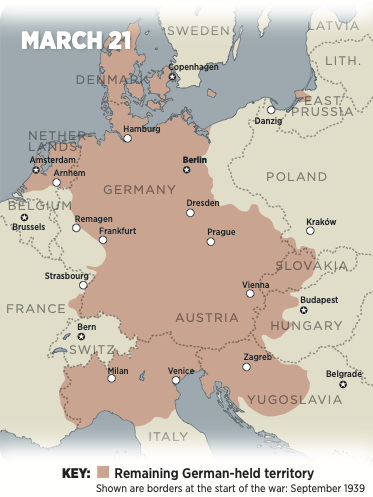 MARCH 23
British Field Marshal Bernard Montgomery’s 21st Army Group begins crossing the Rhine in Germany. By the end of the day, an entire division would be across. Allied soldiers find exhausted German defenders are putting up only token resistance.

APRIL 12
Roosevelt dies of a cerebral hemorrhage during a visit to his retreat in Warm Springs, Georgia. His health had been declining since his return from Yalta. Vice President Harry Truman is sworn in as president. 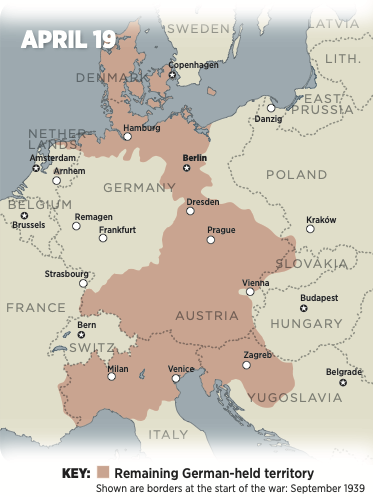 APRIL 20
Hitler spends his 56th birthday awarding Iron Crosses to boy soldiers of the Hitler Youth. Hitler would spend the next 10 days in his bunker.

APRIL 25
U.S. and Soviet troops first make direct contact on the River Elbe in Torgau, Germany. Milan and Turin are liberated as the Nazi occupation army continues its pullout of Northern Italy in the face of open insurrection by the Italian resistance movement.

APRIL 27
Italian dictator Benito Mussolini is arrested by Italian partisans trying to leave the country while disguised as a German soldier.

APRIL 28
Mussolini and his mistress are shot to death and their bodies hung in the Piazzale Loreto in Milan.

APRIL 29
What remains of the German army in Italy issues an unconditional surrender.

Hitler orders Col. Gen. Ritter von Greim to arrest Heinrich Himmler, head of the German SS, for attempting to negotiate a peace with the Allies. He then writes in a “political testament” that the outbreak of the war was the fault of the Jews. He nominates Admiral Karl Doenitz as his successor and marries his longtime mistress, Eva Braun.

Hitler and Braun kill themselves in their bunker. Hitler shoots himself. Braun takes poison. The next day, German Army Gen. Hans Krebs attempts to negotiate a cease-fire with Soviet forces, but the Soviets demand an unconditional surrender. The fighting goes on.

MAY 1
Nazi propaganda minister Joseph Goebbels and his wife Magda kill themselves in the Reich Garden outside the Fuherbunker. They also have their six children killed with cyanide pills.

MAY 2
After 12 days of fierce house-to-house fighting, Soviet troops take Berlin. The Soviet Army hoists the hammer-and-sickle flag over the German Reichstag building.

MAY 4
All German units in the Netherlands, Denmark and northwest Germany surrender.

The Prague uprising – an attempt by the Czech resistance to end German occupation before the Soviet Army arrives – begins. 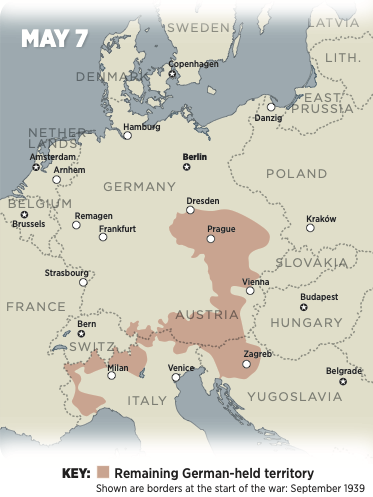 MAY 7
German Gen. Alfred Jodl signs an unconditional surrender for all remaining German forces. Hostilities are to end at midnight on the 8th.

MAY 8
The Prague uprising ends with the halt of fighting. The date will become a national holiday in the Czech Republic.

V-E Day – for Victory in Europe – is celebrated around the world.