It took Washington State to make a USC quarterback look good on a Sunday.

You know, when the NFL usually plays.

OK, that’s probably the only dig at the Trojans that can be mustered out of the 38-13 calamity at the Coliseum that unfolded on Pac-12-The-Day-After-Dark.

A full 22 days passed between Wazzu’s previous competitive outing, the Nov. 14 loss to Oregon, and Sunday’s COVID-delayed kickoff in Los Angeles. Two games – against Stanford and the Apple Cup against Washington – were wiped off the schedule when the Cougars had too many players tied up in testing protocols or just plain absent to make them work.

But then, the Trojans had to sit out their dance last weekend against Colorado, too. So there’s only so much that can be chalked up to dormancy.

Indeed, the Trojans couldn’t have looked more revved up and ready.

And the Cougs made deer in the headlights look like a Marine battalion.

There were hints of that in two false starts that undermined WSU’s opening possession. Or in the gains of 20 and 30 yards the Cougs surrendered on USC’s first two completions.

But by the time freshman quarterback Jayden de Laura threw interceptions on back-to-back Cougar snaps and USC’s Amon-Ra St. Brown caught his fourth touchdown before a quarter had even elapsed, sifting through clues and code had been rendered a wasted exercise.

“It’s hard to blame it on rust,” said WSU coach Nick Rolovich. “We were still practicing. Guys were still getting reps. I’ve got to get these guys more prepared to play.

“Pregame, I wasn’t sure if it was the quiet before the storm or if there was some intimidation.”

The storm turned out to be all USC. 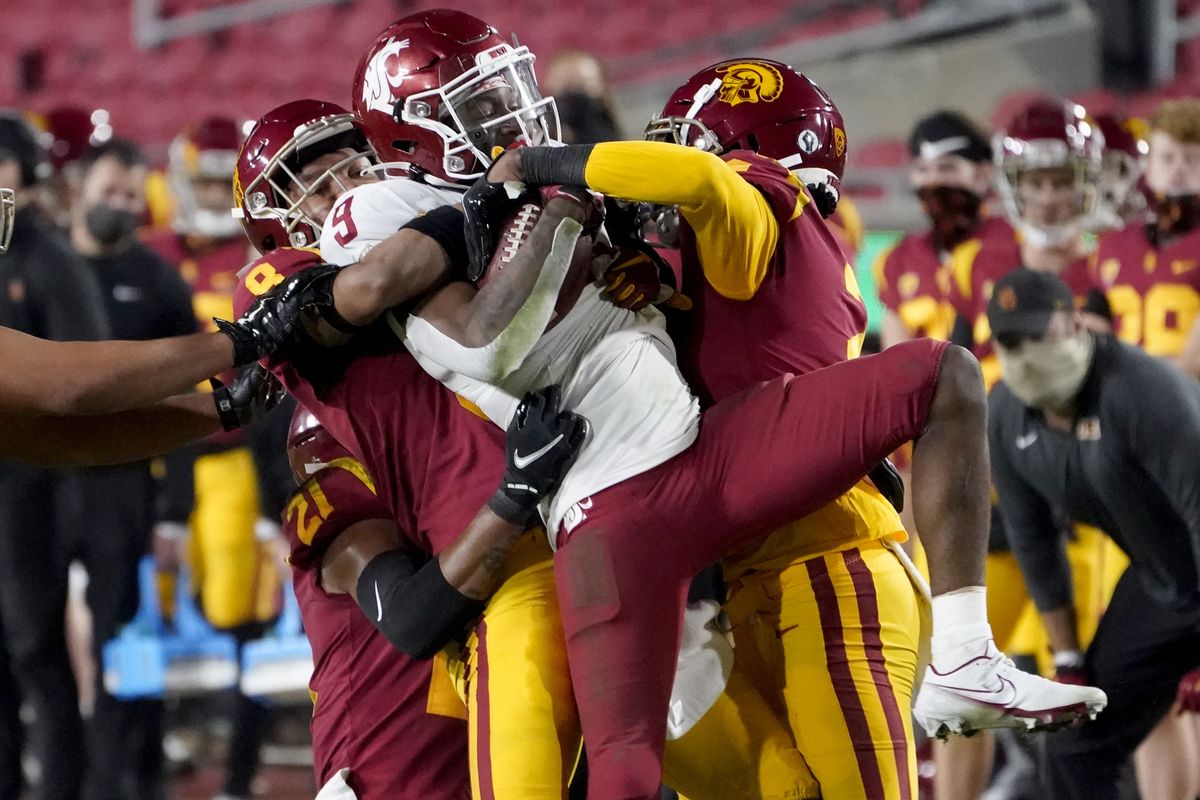 Yes, in the quiet afterward, the Cougars held their own – but that’s a little like staying afloat on a piece of driftwood in the middle of the Pacific. You’re still desperate for a rescue ship to appear on the horizon.

The Trojans of the first half, of course, were the Trojans that are expected at every kickoff – superior, dominant, uber-talented and smug. That they are no longer to the Pac-12 what Alabama is in the SEC or Ohio State in the Big Ten – and haven’t been since Pete Carroll took leave a decade ago – is in some measure responsible for the conference’s sagging reputation in football circles.

So at least the Cougs did some public service in that regard.

They just didn’t do much for their own reputation. But they have more dire issues at the moment.

Manpower, for one. With various levels of cloak-and-dagger going on in Pac-12 football offices, it’s hard to know if there’s a program that’s been hit harder by defections and opt-outs. But there are at least a half-dozen significant contributors who’ve been lost via that kind of attrition, on a roster that can’t really take it.

The weekly injury/COVID losses that all teams deal with impacted Wazzu the most on Sunday in the secondary, where no fewer than four of the Cougars’ top 10 weren’t available.

So it wasn’t a huge surprise to watch sophomore quarterback Kedon Slovis carve up the Cougs, even if it didn’t take the sharpest knife. Splendid targets like the elusive St. Brown and the bullish Drake London created plenty of space. And even more splendid field position – there was some poor punt team work on top of de Laura’s two picks in the first half – created opportunity.

It was a burst-balloon night for de Laura, the freshman whose Cougar debut a month ago spawned a vague hope for this year of COVID loss and limbo. Rallying the Cougars for a late first-half touchdown drive looked like a spark, but it was snuffed quickly – though his demeanor wouldn’t suggest a confidence blow.

“He’s already played well at this level,” Rolovich reasoned. “We just have to get him back to that thought process and be honest with him. If there were mistakes he made, we’ve got to address it, but tell him we still believe in him and he’s here for a reason and he’s got to flush it in a day or so.”

So there will be no COVID back door to the Pac-12 North title for the Cougs via winning percentage. There is a chance for redemption next week against Cal and the notion of a rescheduled Apple Cup the week after if Oregon takes care of Washington.

But a drubbing like this means there’s a chance for more lasting damage.

“If USC beats us twice, that’s what can’t happen,” Rolovich said. “If this loss is not mended up before we begin prep for Cal, this can carry over and beat us twice.”

Double jeopardy, in other words. There’s been a lot of that going around in college football’s year of COVID.