By Angela Schneider The Spokesman-Review

Where: EWU Recreation Center in Cheney.

John Shuster is the defending U.S. men’s curling champion, so he knows how much will be at stake at the USA Curling National Championships over the next week in Cheney.

When each foursome hits the ice at the URC Ice Arena today through next Saturday, Feb. 15, they will know the winners of the men’s and women’s draws are going to the World Curling Championships in Prince George, British Columbia, for the women, and Glasgow, Scotland, for the men.

Their placement at those March events will help, in turn, determine if Team USA will earn berths at the 2022 Winter Olympics in Beijing, China.

It’s probably good then that he has faced a lot of pressure already in his curling career, and he’s just not feeling it anymore.

Not since the 37-year-old skip, along with third Chris Plys, second Matt Hamilton and lead John Landsteiner beat Sweden’s Niklas Edin 10-7 in the gold-medal game at the 2018 Olympics in South Korea. 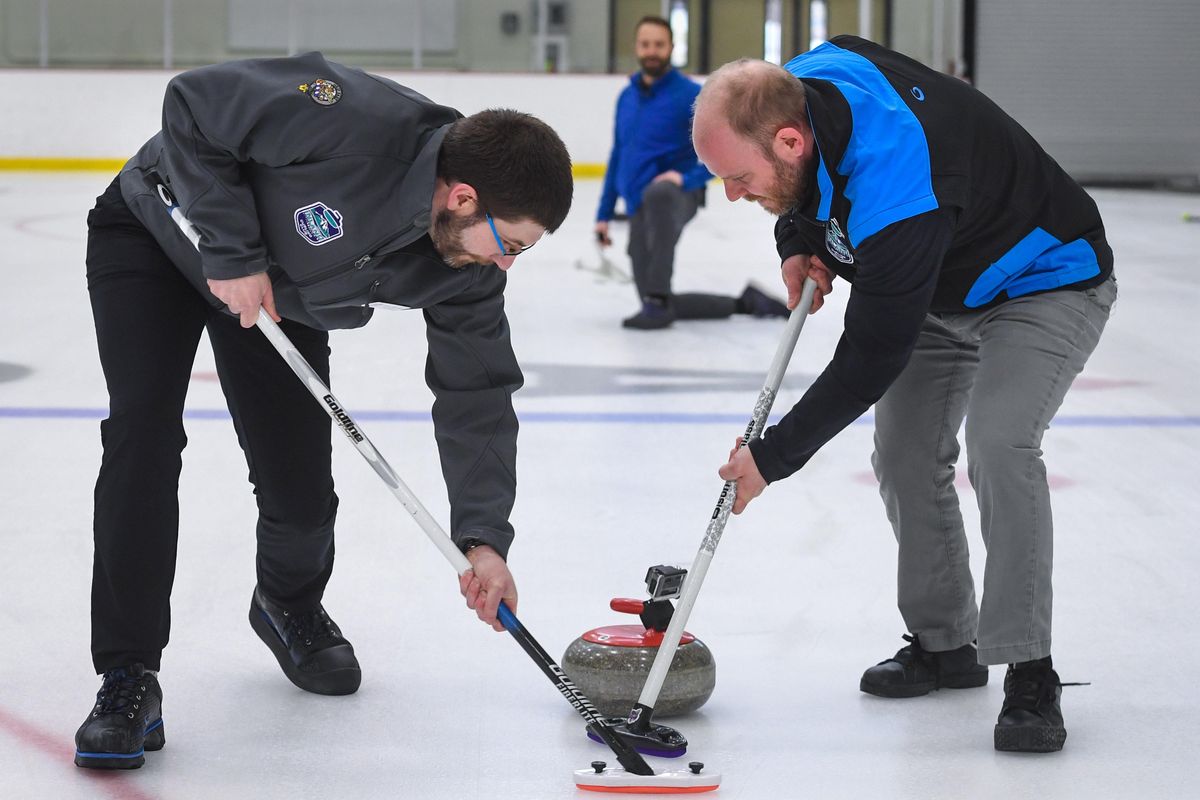 Matt Moore, left, and George Thomsen sweep the ice in front of a granite curling stone during a demonstration, Wednesday, Jan. 29, 2020, at the EWU Recreation Center in Cheney, Wash. (Dan Pelle / The Spokesman-Review)

“The pressure of having to achieve is lifted,” Shuster said Monday, getting ready to pack for his trip to the Spokane area. “We’ve done some crazy things, ‘pinch yourself’ kind of things.”

Shuster threw the first pitch at the Minnesota Twins 2018 home opener, and his team threw a rock from center ice at the NHL Stadium Series outdoor game in Maryland between the Toronto Maple Leafs and the Washington Capitals. They also dropped a ceremonial puck at a Minnesota Wild home game.

“I’d never even been to a Twins home opener,” he said. “It’s been incredible stuff. We went to New York City right after we got home from the Olympics, and we couldn’t go a block without being recognized.”

He never imagined curlers would attain celebrity status in the U.S., not like they do in more curling-mad countries such as Canada, Scotland and Sweden.

With the popularity of the Olympics and a growing fan base from NBC Sports’ “Curling Night in America,” though, it’s happening.

“I don’t have to tell people what curling is anymore,” Shuster said, laughing.

And Spokane is lucky to have it all right on its doorstep for a week.

The level of competition at the national championships will be world-class, he promised.

The women’s field is led by defending champ Jamie Sinclair of Kalamazoo, Michigan, who’s going for her fourth consecutive title with a new crew of Cory Christensen, Vicky Persinger, Taylor Anderson and Sarah Anderson. Sinclair won the 2018 Players’ Championship, participating on the first U.S. team to win a Grand Slam event on the World Curling Tour.

Shuster’s rink is the third seed on the men’s side.

A seven-time national champ – four as a skip and three on Pete Fenson’s rink – Shuster is OK if the other teams think of him as an underdog this season.

Korey Dropkin, of Duluth, Minnesota, is the top seed with a 12th overall world ranking, and Rich Ruohonen of Brooklyn, Minnesota, is second at 16th in the world.

Shuster is ranked 24th in the world.

“We played a lighter schedule this year,” he explained. “I mean, they were tough, tough events but we just didn’t attend as many events.”

In 50 games over six tournaments, including two Grand Slam events, Shuster has a 32-18 record. His best showing was at the WCT Uiseong International Curling Cup in South Korea, where he lost 7-4 to Canada’s Mike McEwen.

He finished third at the Karuizawa International in Japan and at the Ed Werenich Golden Wrench Classic in Tempe, Arizona.

“We’re looking at a solid field (at nationals),” Shuster said. “It’s a good mix of veterans and new faces, and there was a time where it was a lot of the same faces. But we’ve all gotten so much better at the game, that you can’t just mark a guy down as a win anymore.”

After all, Dropkin beat him in the round robin at last year’s nationals and Ruohonen beat him three times in other events last season.

“It’s OK if they think we’re having a down year,” Shuster said. “They haven’t seen us play at all, so they might be in for a surprise.”

Opening ceremonies are set for 5 p.m. today at the URC Ice Arena in Cheney. The first men’s draw goes right after at 7:30 p.m. The Page playoffs run Friday, Feb. 14, with the women’s and men’s final scheduled for noon and 5 p.m., respectively, on Saturday, Feb. 15.

TESN will produce a live webstream of a select game for each draw, along with tiebreaker, playoff and championship games.