The average American will spend $196.31 on Valentine’s Day candy, cards, jewelry or other items. But how did Valentine’s Day get its start as a day to treat your sweetie?

THE LEGEND OF ST. VALENTINE

In the third century, Roman Emperor Claudius II — known as Claudius the Cruel — decided that unmarried men made better soldiers than those with wives and families, so he ordered marriages banned throughout Rome. 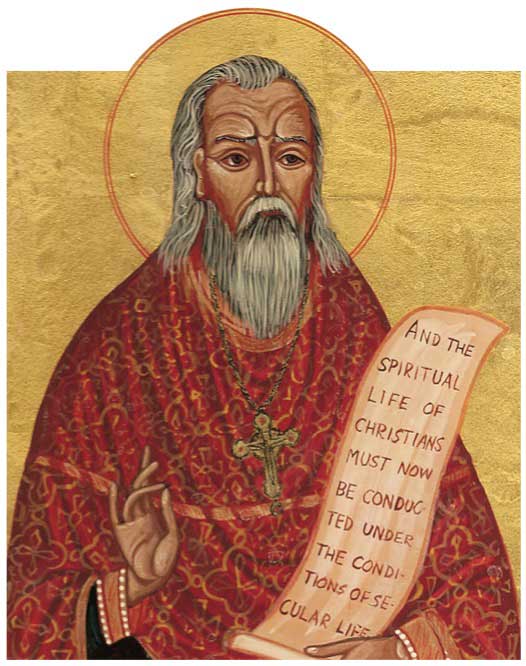 Valentine, a Roman bishop, thought this unfair, so he performed secret weddings anyway. And was eventually caught.

Valentine was sentenced to death and imprisoned in the home of a noble. In the meantime, he healed the blindness of his captor’s daughter. When the time came for him to be beheaded — supposedly on Feb. 14, 270 A.D. — he wrote a goodbye note to the girl, signing it “Your Valentine.” 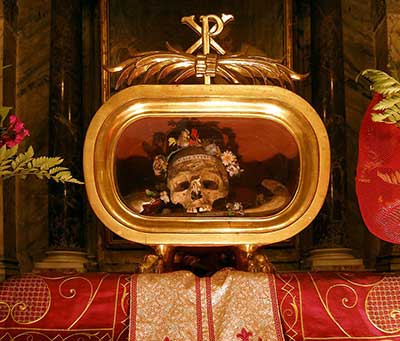 Valentine’s body was found in a catacomb near Rome in the 1800s. His skull — adorned with flowers — is on display at the Basilica of Santa Maria in Cosmedin, Rome

All this makes a really interesting story. There’s only one little problem: Historians are pretty sure that most of it isn’t true.

Nor do historians buy into a second account of a St. Valentine from that same time-period — the Bishop of Terni — who was also said to be martyred by Cladius II in Rome. These two accounts are so simiar, in fact, that’s it’s likely they’re actually two versions of the same story.

As if that wasn’t enough, there’s a third St. Valentine with ties to Feb. 14, who was supposedly martyred in Africa.

The Catholic Church found this so confusing that it discontinued liturgical veneration of St. Valentine in 1969, although it kept his name on its list of officially recognized saints.

Because “Valentinus” was a popular name between the second and eighth centuries — in Latin, it means worthy, strong or powerful — several martyrs over the centuries have been called by this name. The official Roman Catholic list of saints shows about a dozen different individuals named Valentine.

HOW ST. VALENTINE’S DAY BECAME A TIME TO CELEBRATE LOVE

There are no records of romantic celebrations on Valentine’s Day until 1375, when Chaucer wrote, in “Parliament of Foules,” that birds — and, by extention, humans — all seek mates on Feb. 14.

By the 1400s, nobles had taken Chaucer’s lead and were writing poems to their main squeezes on Valentine’s Day.

The British Library in London holds what it says is the oldest surving valentine: A poem, composed in French by Charles, Duke of Orleans, in 1415. He sent it to his wife while he was held prisoner in the Tower of London.

In 2000, the British Library put on display what it called the oldest existing Valentine’s Day message composed in English: From Margery Brews of Norfolk, England, to her fiancé, John Paston, in 1477.

By the 1850s, Esther A. Howland of Worcester, Mass., had begun making what were the first Valentine’s Day cards. She started out with a small, homemade operation and grew it into a $100,000-a-year business. Which, in those days, was pretty big money.

In 1866, candy maker Daniel Chase began stamping Valentine’s Day sayings on specially heart-shaped candy lozenges. He would sell his business to Necco in 1901.

In the 1900s, Richard Cadbury began making special boxes of chocolates to give to that special someone on Valentines Day.

According to a January survey by the National Retail Federation and Prosper Insights & Analytics, Americans will spend, for Valentine’s Day ...

Survey of 7,267 adult consumers conducted Jan. 2-9. Margin of error: Plus or minus 1.2 percentage points.

Oh, and about those candy hearts...

In July 2018, the Necco candy company went out of business. A new company — Spangler — wound up with the license to make Sweetheart candies, the little heart-shaped candies with the cute little sayings on them. But all this happened too late to produce Sweethearts for the next Valentine’s Day. Hence: No candies for 2019.

Spangler promised to have Sweethearts back on shelves for this year, however. And they did — sort of. The company is having trouble with their candified printing presses: They can’t get the words printed on the candies. So many of the Sweethearts you’re seeing this year have very little to say.

Sure enough, the one box of Sweethearts your (admittedly diabetic) correspondent bought and opened were completely blank.