WASHINGTON – The Pentagon disclosed on Friday that 34 U.S. service members suffered traumatic brain injuries in Iran’s missile strike this month on an Iraqi air base, and although half have returned to work, the casualty total belies President Donald Trump’s initial claim that no Americans were harmed. He later characterized the injuries as “not very serious.”

Eight of the injured arrived in the United States on Friday from Germany, where they and nine others had been flown days after the Jan. 8 missile strike on Iraq’s Ain al-Asad air base. The nine still in Germany are receiving treatment and evaluation at Landstuhl Regional Medical Center, the largest U.S. military hospital outside the continental United States.

Jonathan Hoffman, the chief Pentagon spokesman, said the eight in the U.S. will be treated at Walter Reed National Military Medical Center in Bethesda, Maryland, or at their home bases. The exact nature of their injuries and their service and unit affiliations were not disclosed. 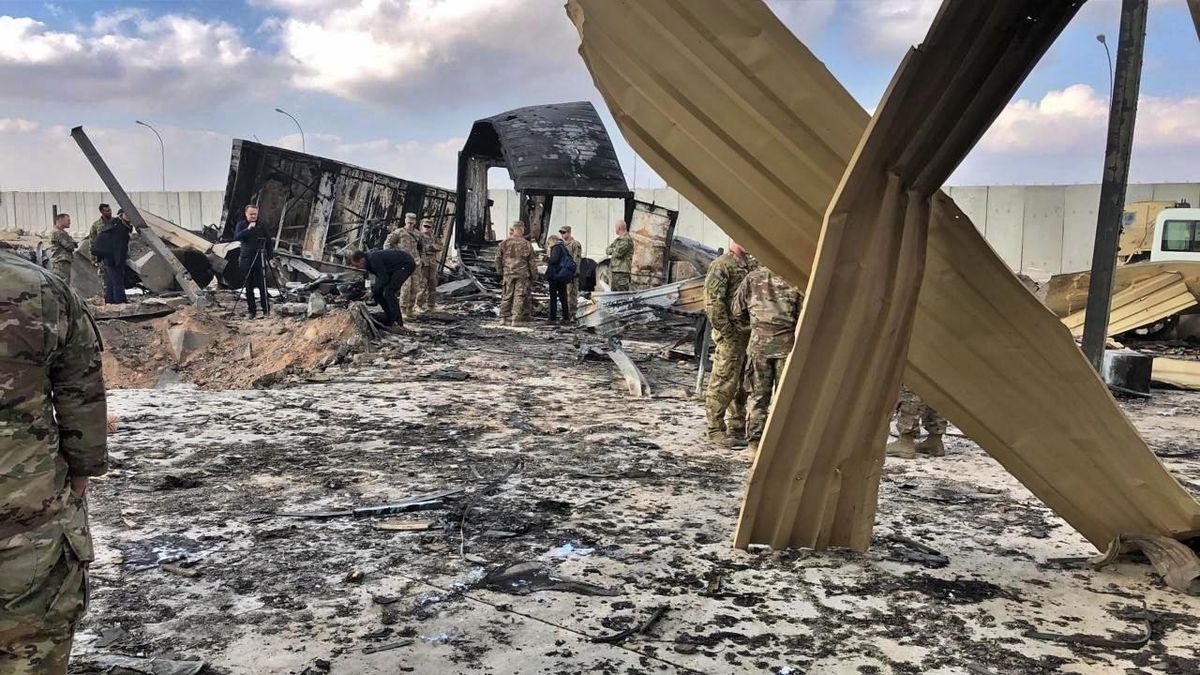 U.S. soldiers and journalists inspect the rubble at a site of Iranian bombing, in Ain al-Asad air base, Anbar, Iraq, Monday, Jan. 13, 2020. Ain al-Asad air base was struck by a barrage of Iranian missiles on Wednesday, in retaliation for the U.S. drone strike that killed atop Iranian commander, Gen. Qassem Soleimani, whose killing raised fears of a wider war in the Middle East. (Qassim Abdul-Zahra / Associated Press)

Trump had initially said he was told that no troops had been injured in the strike, which Iran carried out as retaliation for a U.S. drone strike in Baghdad that killed Iran’s most powerful general, Qassem Soleimani, on Jan. 3. The military said symptoms of concussion or traumatic brain injury were not immediately reported after the strike and in some cases became known days later. Many were in bunkers before nearly a dozen Iranian ballistic missiles exploded.

The question of American casualties took on added importance at the time of the Iranian strike because the degree of damage was seen as influencing a U.S. decision on whether to counterattack and risk a broader war with Iran. Trump chose not to retaliate, and the Iranians then indicated their strike was sufficient for the time being. Tensions have since eased.

After the Pentagon reported on Jan. 17 that 11 service members had been evacuated from Iraq with concussion-like symptoms, Trump said, “I heard they had headaches and a couple of other things … and I can report it is not very serious.” He said he did not consider the injuries to be as severe as those suffered by troops who were hit by roadside bombs in Iraq.

“TBI is a serious matter,” Reed said in a statement. “It is not a ‘headache,’ and it’s plain wrong for President Trump to diminish their wounds. He may not have meant to disrespect them, but President Trump’s comments were an insult to our troops. He owes them an apology.”

Traumatic brain injury, or TBI, has become a bigger concern for the military in recent years as medical science improves its understanding of its causes and effects on brain function. It can involve varying degrees of impairment of thinking, memory, vision, hearing and other functions. The severity and duration of the injury can vary widely.

The Defense Department has said more than 375,000 incidents of TBI occurred in the military between the years 2000 and 2018.

Jefferson Kinney, a neuroscience researcher at the University of Nevada at Las Vegas, where he is chair of the department of brain health, said Friday that much remains to be learned about TBI, including its effects on behavior.

“It depends a lot on how severe the damage is and where the damage is,” among other factors, he said. “There is huge variability across individuals. Some people will undergo a trauma that they seem to recover from very quickly, and others seem to be much more impacted by it for a longer duration.”

The Centers for Disease Control and Prevention says a severe TBI may lead to death or result in an extended period of coma or amnesia.

Hoffman’s disclosure that 34 had been diagnosed with TBI was the first official update of the number injured since the Pentagon announced the evacuation of the first 11. On Jan. 21, officials said more had been sent out of Iraq for further diagnosis and treatment, but the Pentagon declined to provide firm figures or say whether any had been returned to duty.

No one was killed in the attack on Ain al-Asad, even though the U.S. had no missile defense systems there to protect from potential attack. Hoffman said Friday that deploying one or more Patriot anti-missile systems to Iraq is among options now being weighed by military commanders. The U.S. had deployed numerous Patriot systems to other countries in the region as protection against Iranian missile attack, including in Saudi Arabia, but a strike on Iraq was seen as less likely.

Some members of Congress this week pressed the Pentagon for more clarity on the scope of the TBI cases resulting from the Iranian attack. Rep. Bill Pascrell, D-N.J., founder of the Congressional Brain Injury Task Force, wrote to senior Pentagon officials on Thursday requesting additional details on casualties from the attack.

On Friday morning, Defense Secretary Mark Esper directed the Pentagon’s acting undersecretary of defense for personnel and readiness, Matthew Donovan, to begin working with the staff of the Joint Chiefs to review how military injuries are tracked and reported – not just TBI cases but battlefield injuries of all kinds, Hoffman told reporters.

“The goal is to be as transparent, accurate, and to provide the American people and our service members with the best information about the tremendous sacrifices our war fighters make,” Hoffman said.