WHAT YOU NEED TO KNOW ABOUT

The first and most important thing to know: “impeachment” is like an indictment. It’s a finding that a crime may have been committed.

After an official has been impeached, he or she faces a trial in the Senate. Only a two-thirds vote in the Senate will remove that official from office.

So “impeachment” and “removal from office” are two different things. It’s important to not confuse them.

“The President, Vice President and all Civil Officers of the United States, shall be removed from Office on Impeachment for, and Conviction of, Treason, Bribery, or other high Crimes and Misdemeanors.” — U.S. Constitution, Article II, section 4

The Constitution states “The House of Representatives ... shall have the sole Power of Impeachment.” But it doesn’t go into detail on how it’s to be done. So each time a presidential impeachment has been discussed, the House has had to set ground rules for the process.

The Constitution does not necessarily require a trial to be held in the Senate. It says only that the Senate has the “sole power to try” the case. The Senate, too, gets to decide on its rules before an impeachment trial.

The Constitution does not define what are “high Crimes and Misdemeanors.” That, too, has been left open for interpretation.

The Constitution does specify that an office holder found guilty will be removed from office immediately. If this happens, the Senate can then vote again — with a simple majority, this time — to disqualify the holder from ever holding office again.

Any member of the House of Representatives can start the impeachment process by introducing a resolution to impeach.

The House Judiciary Committee holds hearings and conduct investigations. It concludes its business by voting whether or not to recommend impeachment.

The House then votes whether or not it supports the articles of impeachment. A simple majority is required to pass each article.

The articles of impeachment are then sent to the Senate. The House selects “managers” to present the case to the Senate — essentially, to act as prosectors.

The Senate can then hold a trial. The White House sends its counsel to defend the president. The Senate is sworn in as a jury. The Chief Justice of the Supreme Court is brought in to preside over the trial.

Once the cases are made, the Senate deliberates in private but then votes in public. A two-thirds vote in the Senate is required for a President to be removed from office.

How it happend this time 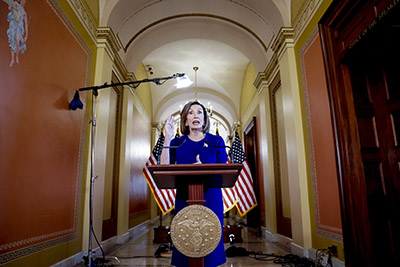 Sept. 24: A month after an anonymous whistle- blower’s revelations that President Donald Trump had withheld aid from Ukraine pending a political favor, Speaker of the House Nancy Pelosi announced the start of a formal impeachment inquiry. 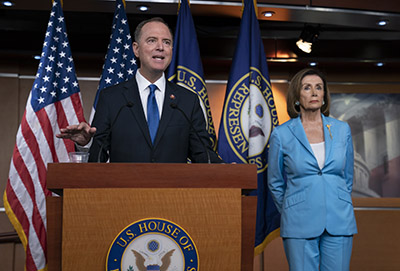 Sept. 26: Given the focus on the president’s dealings with Ukraine, Pelosi assigned the investigation not to the Judicial Committee, but to the House Intelligence Committee and its chairman, Adam Schiff of California. 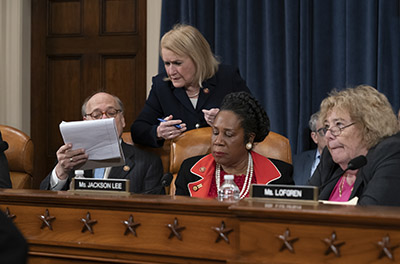 Dec. 13: The Intelligence Committee passed along its findings to the Judiciary Committee, which approved two articles of impeachment against Trump: Abuse of power and obstruction of Congress. 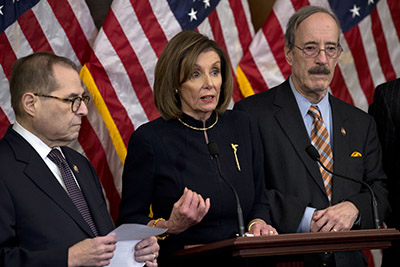 Dec. 18: The House of Representatives spent just six hours debating the articles. Voting mostly along party lines, the House voted to impeach Trump on both counts. 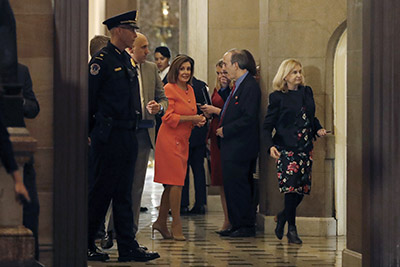 Jan. 15: Democrats called for more investigations and witnesses and Senate Majority Leader Mitch McConnell opposed both. After a month of back-and-forth, Pelosi delivered the two articles of impeachment to the Senate.

Republicans successfully blocked House Managers’ wishes to call White House officials and former officials as witnesses and to subpoena testimony for documents the administration had declined to turn over during the House investigation.

The Senate trial began Wednesday. Each side will get 24 hours to make its case. House prosecutors are expected to finish by the end of the week with White House lawyers speaking next week.

Johnson’s impeachment trial was really about whether or not he could fire cabinet members without permission of the Senate.

After identical votes failing to pass three of the 11 articles, the Senate voted to adjourn the trial.

Clinton’s impeachment started with a sexual harassment lawsuit and his testimony under oath in that suit and in a subsequent grand jury investigation. Two of the four proposed articles passed the House. Clinton would be acquitted by the Senate but would be cited for contempt of court by a federal judge, fined $90,000 and would lose his license to practice law. 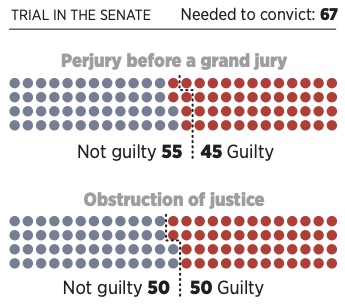 Three House members did not vote. One, Democratic presidential candidate Tulsi Gabbard of Hawaii, voted only “present” for both articles. 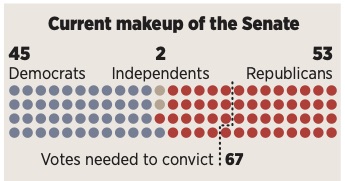 It’s not just presidents who can be impeached and possibly removed from their offices. The Constitution says “all Civil Officers.” In addition to Johnson, Clinton and Trump, there have been 17:

Sources: Office of the Historian of the U.S. House of Representatives, “The State of the Presidency” by Thomas E. Cronin, “Impeachment: An American History” by Jon Meacham, Timothy Naftali, Peter Baker and Jerey A. Engel, The Washington Post