THE SOUND OF SILENCE

Coronavirus is forcing Major League Baseball teams to play in empty stadiums. What will the fans think? Fans in some cities – like Baltimore, for example – will probably think they’ve seen this happen before.

What you see in the photo above is a real game between the Baltimore Orioles and the Chicago White Sox at Camden Yards on April 29, 2015 – a little more than five years and two months ago. Attendance that day: Zero.

What forced the Orioles to shut down their turnstiles and send home their beer vendors that day? On April 12, Freddie Gray, a 25-year-old Black man, was arrested for simple possession of a knife. It’s unclear how it happened, but somehow Gray ended up with a spinal cord injury and died a week later. Which sparked protests.

As protests unfolded over the next few days, things turned violent near Camden Yards. On April 25, a game against the Boston Red Sox went into extra innings. But police locked down the stadium to keep fans safely inside. The Orioles then postponed their next two games against the White Sox, to be played as a doubleheader a month later.

But that left the third game of that home series that needed to be played. So the answer was to play with no fans present. The game was moved to early afternoon, to comply with a citywide 10 p.m. curfew.

NBC Sports reported that the stadium was so quiet that White Sox fans at home could hear the Orioles’ radio announcers’ voices leaking through the walls of the press box.

The Orioles jumped out to a four-run lead in the first inning with a home run by first baseman Chris Davis. As he circled the bases, he said he heard cheering from beyond the center-field gates: A handful of fans had gathered there to watch whatever they could.

The Orioles won the game 8-2 but the negative reaction to the fans-less game was nearly universal. Rather than play more games in an empty stadium, the Orioles moved their next three-day weekend home series with the Tampa Bay Rays to Tropicana Field in St. Petersburg, Florida.

But it seems history will repeat itself: When the delayed 2020 MLB season begins on July 27, games will be broadcast on various TV and radio networks. But fans will not be allowed to enter stadiums.

The COVID-19 pandemic and the resulting alterations to the 2020 baseball season comes at a particularly interesting time for Major League Baseball. Attendance has been dropping since 2007.

Who isn’t worried by this trend? Team owners, evidently. The New York Times reports that league revenue was up more than 70 percent over the past decade, thanks to increasing media rights fees. “Ticket sales, long the bread and butter for the sport, are no longer the central driver of the business at a time when the sport’s digital business is ascendant,” the Times reports. 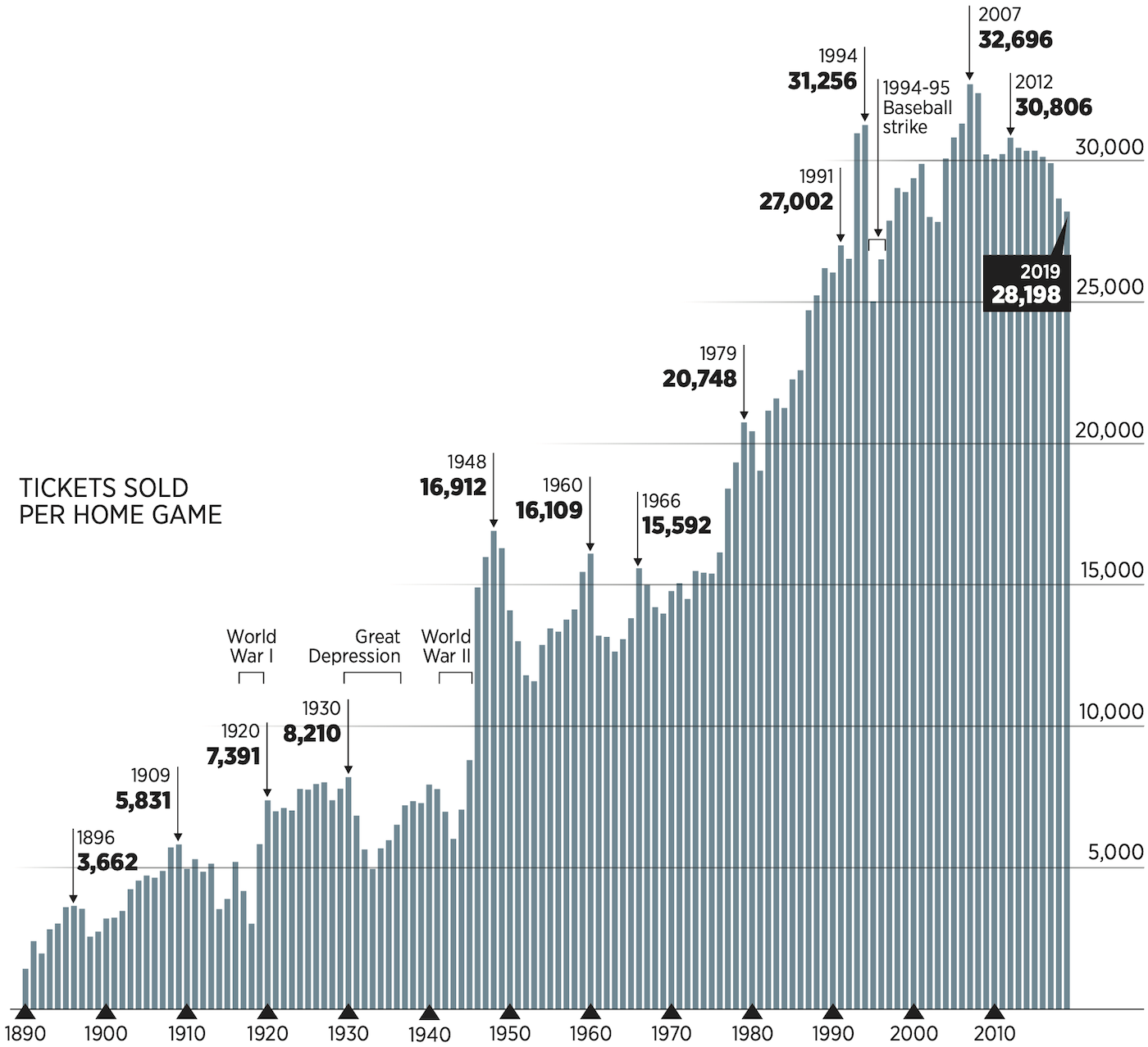