The BIRTH of CABLE NEWS

Once upon a time, you could watch TV news in the mornings (think NBC’s “Today” show), in the evenings and maybe again at night. The rest of the time, you relied on radio or newspapers. All that changed 40 years ago today with “the 24-hour news cycle” brought on by the creation of CNN.

It’s difficult to remember how different the TV news landscape was before the creation of cable news. What’s more, the guy who made it all happen was satellite TV pioneer Ted Turner – who, at the time, may have been more famous for winning the America’s Cup sailing event in 1977 or buying the Atlanta Braves and then blasting their games nightly across the nation on what had previously been a low-rent UHF TV station.

Turner had never been serious about news at his station, but he suddenly decided he needed to start a news operation that would be based not in New York or Washington, D.C., but someplace else. So he put it in his hometown of Atlanta – in the basement of a building that had once been a Jewish country club.

CNN went on the air at 2 p.m. Pacific on June 1, 1980. Turner made a brief speech, had a United Nations flag raised beside the Georgia and U.S. flags and then threw the broadcast to David Walker and Lois Hart, a husband-wife anchor team whom Turner had hired away from a station in Sacramento, California.

The new venture was not without its setbacks. One day a studio light exploded, setting fire to the pants of one of its biggest stars, longtime CBS News veteran Daniel Schorr.

CNN lost a lot of money its first few years – reportedly $2 million a month. Turner continued investing in his venture by setting up news bureaus around the world. In 1983, he eliminated his competition by buying the Satellite News Channel – partly owned by ABC.

The big breakthrough for CNN would come during the Persian Gulf War in 1991: CNN was the only major news operation that had a team in Baghdad and could get information – including live pictures and reports, of course – back to the U.S. Defense Secretary Dick Cheney told reporters he was following the attacks on CNN. One Detroit NBC affiliate pulled its network coverage and simply ran CNN’s feed.

In 1996, Turner sold his collection of cable networks to Time Warner, which, in turn, was acquired by AT&T in 2018. CNN’s corporate parent today is WarnerMedia.

How cable TV news has evolved since 1980

NewsNet – all news, no opinion – launches

CNN lost its ratings lead to Fox News in 2002 and then fell further behind during the war in Iraq. These days, it’s in third place – and sometimes a distant third place – behind Fox and MSNBC. In April, Fox posted its biggest month of prime time ratings in its history. A pair of Fox News daily programs – “Special Report With Bret Baier” and “The Five” – are the No. 1- and No. 2-ranked programs in all of cable news.

All three major cable networks got a ratings boost in April with COVID-19 coverage. 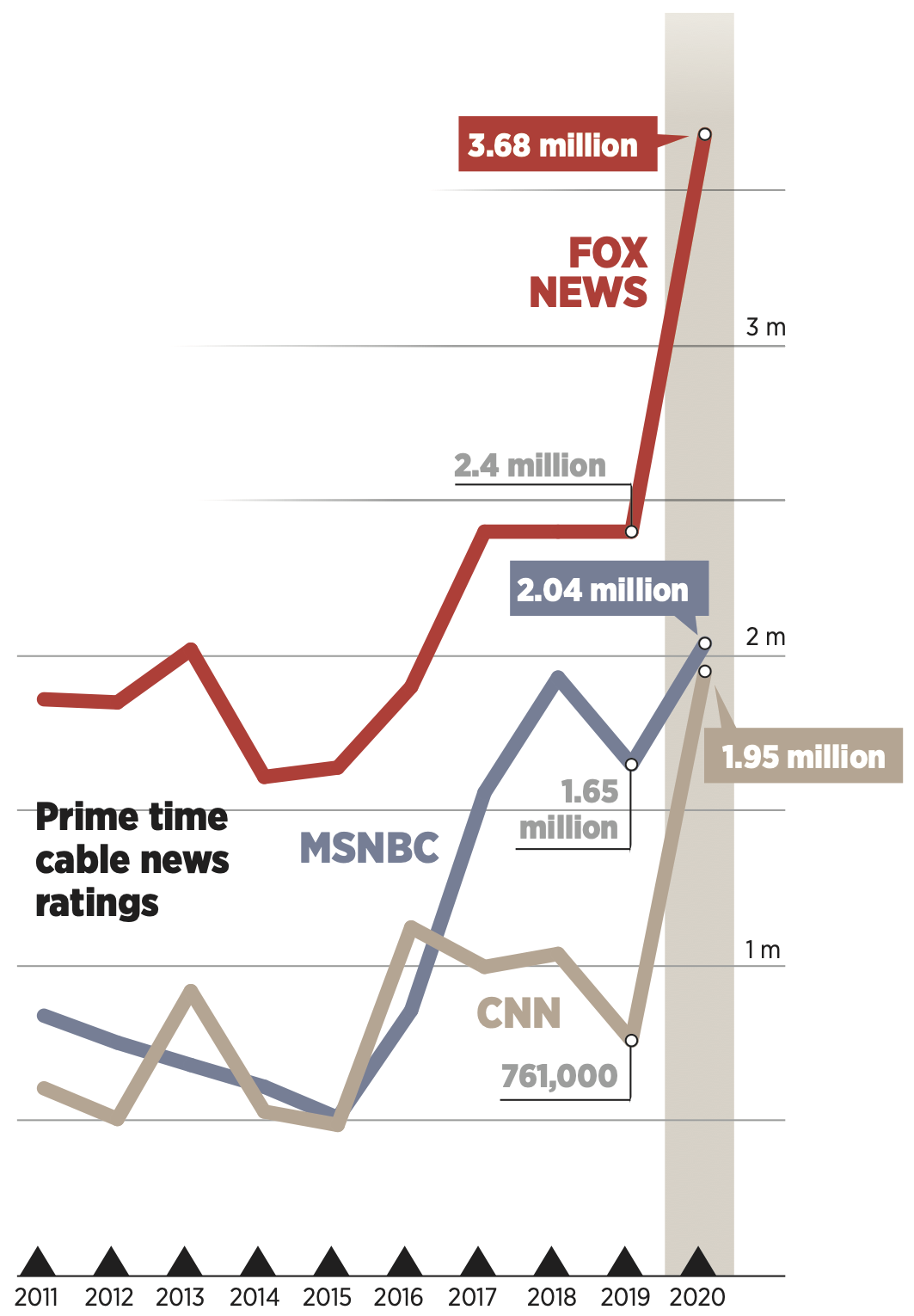