The horrific death of a Black man in police custody in Minneapolis ­– and the slow rate at which the wheels of justice seemed to turn afterward – ignited a firestorm of protests around the country this weekend. Here’s a look at some of the major happenings:

Minneapolis: George Floyd, a 46-year-old Black man, dies while handcuffed and pinned to the ground by four Minneapolis police officers. Bystanders capture video of one officer pressing on Floyd’s neck with his knee. Floyd is heard repeatedly saying “I can’t breathe.”

The video is uploaded to social media and immediately goes viral.

Minneapolis Police Chief Medaria Arradondo fires all four officers involved in the arrest and calls for an FBI investigation, given that the video shows a completely different story than the one filed in the police report.

That night, hundreds of protesters take to streets of Minneapolis and, in particular, around the precinct house out of which the officers had worked. Police vehicles are vandalized.

Memphis, Tennessee: A protest is held to honor Floyd as well as other African-Americans recently killed by police or former police officers: Breonna Taylor in Louisville, Kentucky, and Ahmaud Arbery in Brunswick, Georgia.

Los Angeles: Hundreds of protesters march downtown around the Civic Center. Some break off from the march to block the 101 freeway.

The Justice Department says a federal investigation into Floyd’s death is a top priority.

Minneapolis Mayor Jacob Frey calls for order and says on Twitter there will be “an all-out effort to restore peace and security” in the city.

Minneapolis: Protesters once again gather around the 3rd Precinct building. After fireworks are set off directly into the building, the department is evacuated and burns down.

President Donald Trump, on Twitter, calls protesters “thugs” and says: “When the looting starts, the shooting starts.” His language is criticized by some as inflammatory.

Minneapolis: CNN correspondent Omar Jimenez and his crew are arrested – while making a live report showing the aftermath of Thursday night’s protests. The arrest comes despite the fact he’s plainly heard offering to move to wherever the officers indicate. Gov. Tim Walz apologizes and has them released.

Later that day, Derek Chauvin – the officer who had pinned Floyd with a knee to his neck – is charged with third-degree murder and manslaughter. He’s taken into custody.

Atlanta: Hundreds of demonstrators block streets at Centennial Olympic Park, smash windows in nearby businesses, set fire to a police car and deface the large CNN sign outside the cable network’s headquarters building.

Louisville, Kentucky: A local TV reporter yells on the air: “I’m getting shot!” as officers shoot at them with what turn out to be pepper balls. Dallas: Protesters hold a demonstration blocks from City Hall, blocking streets. Police use tear gas.

Detroit: A 19-year-old man is killed while sitting in his car when someone opens fire in a crowd of demonstrators.

St. Louis: A man is killed after protesters set fires, block I-44 and attempt to loot a FedEx truck.

Washington, D.C.: A crowd gathers outside the White House, causing the Secret Service to put the building into lockdown. A number of protesters chase and attack a Fox News correspondent and his crew, taking his microphone and striking him with it and breaking their camera.

Oakland, California: A contract security guard for Homeland Security is shot and killed outside the federal courthouse. The governor warns against connecting the shooting with protests.

Minneapolis: Mayor Frey calls upon people to stay home and tweets: “What had started as largely peaceful protests for George Floyd have turned to outright looting and domestic terrorism in our region.”

The state’s computer system is attacked by internet hackers.

A reporter for Vice News is pepper-sprayed in the face by a police officer. The incident is caught on a cellphone video. Freelance photojournalist Linda Tirado is shot in the eye, suffering permanent damage.

St. Paul, Minnesota: Mayor Melvin Carter claims nearly all of the people arrested Friday were from out of state. Hours later, he walks back that claim: It turns about that about 86% of those arrested reside in Minnesota.

Detroit: 84 people are arrested – double the number from the previous night. Mayor Mike Duggan would say later that some of the people arrested for looting appear to be organized, with walkie-talkies and trucks.

Indianapolis: One person is killed and three more injured when a gunman fires at protesters.

Pittsburgh: 60 buildings are damaged and 44 protesters are arrested.

Denver: 83 arrests are made for damaging property, carrying prohibited weapons and curfew violations.

Tallahassee, Florida: A man drives a pickup truck into an intersection filled with protesters. There are no serious injuries. The driver is arrested.

Los Angeles: Nearly 400 are arrested, most for looting.

New York: Two police SUVs plow into a group of protesters in Brooklyn. A video of the incident circulates on social media. The next day, Mayor Bill de Blasio calls for an investigation.

New York: Officials report that so far, more than 345 people have been arrested, 33 officers injured and 47 police vehicles damaged or destroyed – several have been set on fire. Gov. Andrew Cuomo calls on protesters demanding change: “Don’t lose the passion, don’t lose the outrage. Be frustrated, but be smart and be directed,” he says.

Washington, D.C.: White House staffers are told to not come into work due to “ongoing demonstrations.” The White House reports that more than 60 Secret Service officers and agents have so far been injured over the weekend.

Trump announces via Twitter the U.S. will officially designate antifa – shorthand for people who oppose fascism – as a terrorist organization. Civil liberties groups say the president lacks the legal authority to do that.

As of midafternoon Sunday, about 5,000 National Guard troops had been activated in 15 states, with another 2,000 standing by. 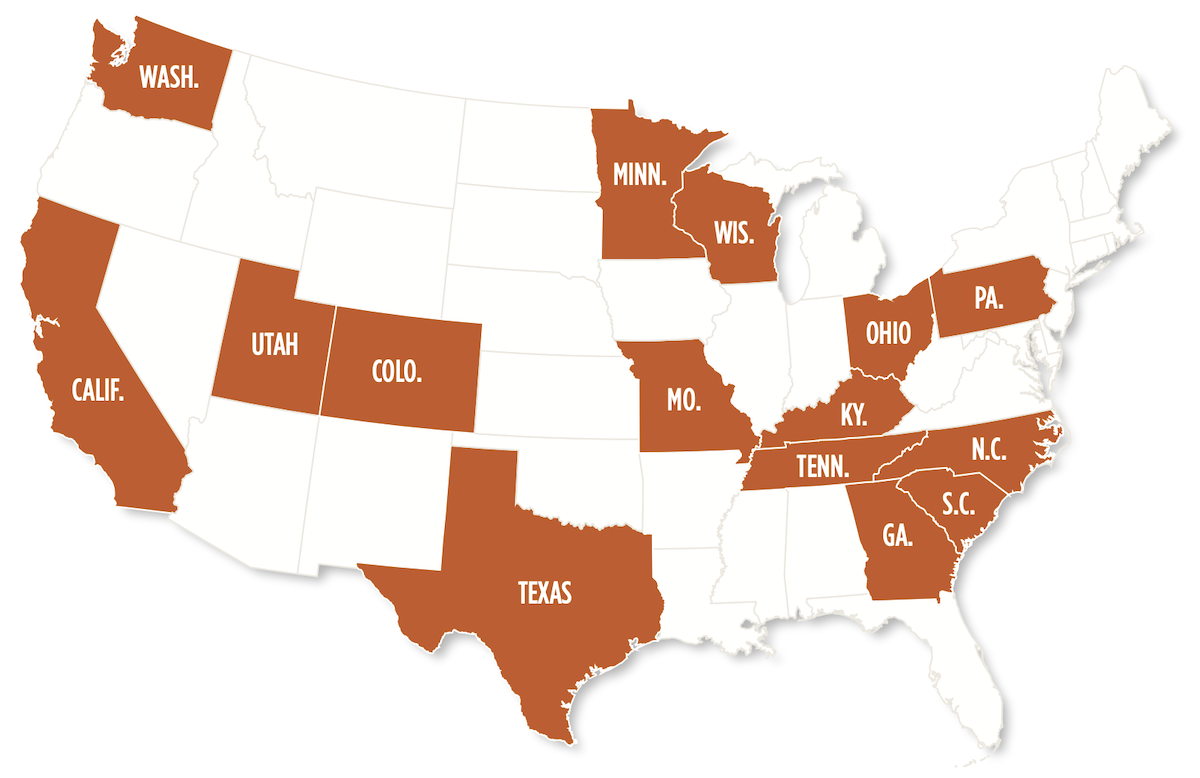 Curfews are in place in at least 39 cities and counties:

Other notable mass protests in the U.S.

Because there are no ticket sales and no turnstiles, crowd sizes at mass protests can be tough to estimate. In each case here, we’re showing the more conservative number. 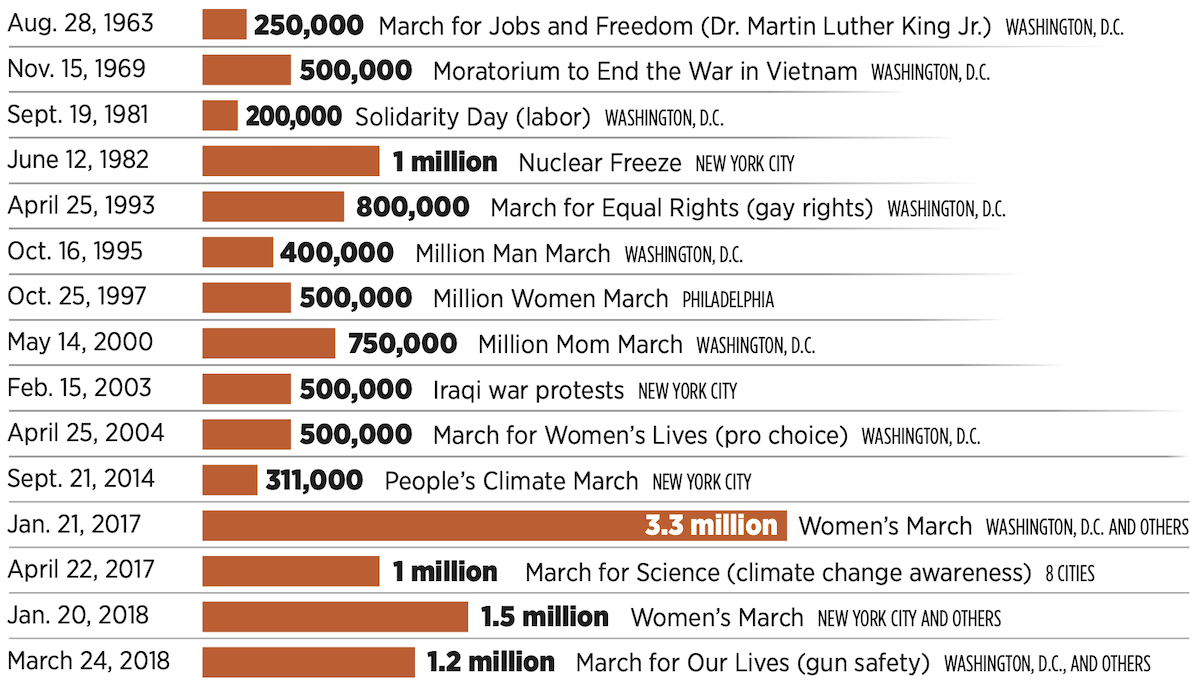