The history of the White Elephant stores mirrors the story of Spokane: A somewhat unconventional place that provides nearly everything that matters at an affordable price.

Outside the Division Street store, the mechanical elephant, which still only costs a dime, is about to offer its last ride.

The Conley family has decided to close its stores in Spokane and Spokane Valley, ending its patriarch’s legacy that started 74 years ago when John R. Conley Sr. started offering Army surplus before converting the business into a sporting goods and toy destination.

Conley died in 2017 at age 90. His oldest son, Rich Conley, said the family had been trying to restructure its business model but decided, after a recent closure caused by the coronavirus pandemic, that it was best just to close shop following a huge sale to clear out all the inventory.

“We’ve just been looking at options for a while,” Conley said. “In the last couple of months, many of us have come to see life in a different light with an emphasis on family, age and health.”

Asked how his father would react to closing the stores, Conley broke down in tears.

“That was his life. I’m sure he’d be saddened by it, just like we all are,” Conley said. “But he knew it was time to move on, too.” 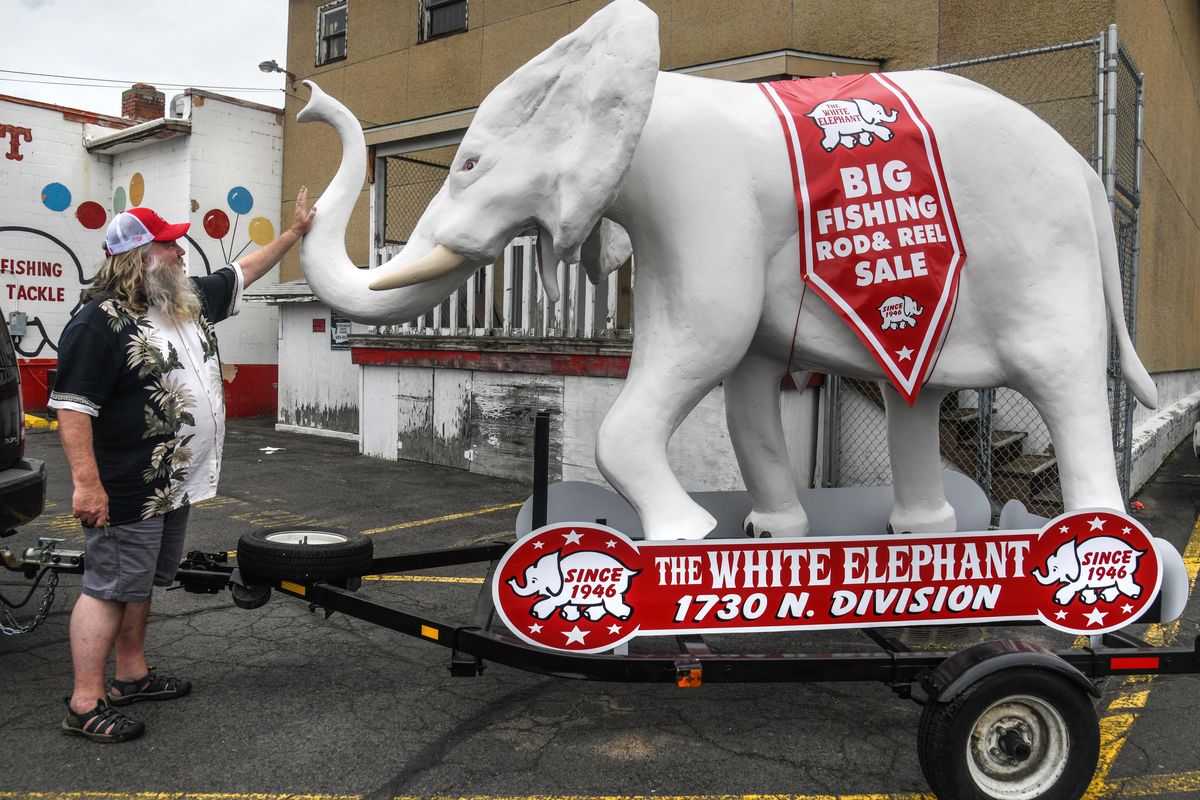 Pat Conley gives a pat to “Elie the Elephant” after unloading her in the White Elephant parking lot on Division Street in Spokane. The structure was built for the valley store, but just recently arrived and won’t be installed before they close the stores. (Dan Pelle / The Spokesman-Review)

John Conley Sr., who went by “John R,” started the store in 1946 after he served two years in the Navy during World War II.

The business got its start after Conley’s uncle sent him to buy Army surplus toilet paper in the Tri-Cities. While there, Conley used his $300 of discharge pay and bought leftover canvas and wood truck coverings called “woodies” for $6 each. He later sold them in Spokane for $100.

That began a lifetime of finding deals and offering things that interested Conley.

Rich Conley said his father loved the outdoors, so he sold camping gear and hunting items. As he began to have the first of his 11 children, he added toys to the stores.

“His first five kids were boys. So he concentrated on selling trains and other things,” Rich Conley said. “Then he started to have girls, so he brought in a broader mix of toys.”

But the outdoors was his passion, and he sold quality camping gear that would last years.

“He knew how to play. He loved to go fishing,” Rich Conley said. “They had to go out on Priest Lake and tell him that my brother was being born and that he better get to the hospital.”

The late Conley never used price tags. He started marking prices with grease pencils, and employees still list the prices with black Sharpie pens, with a higher price marked out to signify a deal.

“We took pride in it. We tried to buy quality merchandise and tried to offer it an affordable price,” Rich Conley said. “It’s the type of store that would be hard to capture again.”

Generations of customers came through its doors and rode the mechanical elephant at the front of the store at 1730 N. Division St. Rich Conley said he thought the elephant had been there since the 1950s.

Decades ago, Conley’s friends said they would race to the store to find the latest version of Matchbox Cars lined up on the shelf.

On Friday, Rich Conley “had a guy to the house to fix something. He said, ‘I bought my first shotgun there.’ ”

The store recently had a customer in his 80s who said he shopped at the store as a child.

“He said he bought his first BB gun there,” Conley said. “He told us how excited he was.”

Through the years, the stores became part of the family’s and Spokane’s DNA.

The family grew up trying to keep up with their father’s business deals, and he used that success to make a comfortable life for his children and more than 90 grand- and great-grandchildren.

Among the perks were employee and family trips to Hawaii. In 1975, Conley paid for 69 family members and employees to travel to Hawaii for vacation.

A few years later, John Conley perfected the art of racking up airline miles by using a credit card. He earned a ticket to anywhere in the world as long as he flew one direction, Rich Conley said.

“He zigzagged around the world so he could go longer,” Conley said. “He touched down in about any place they would let him land. When he would take grandkids on trips, he would really wear them out. He’d get out, take pictures and say, ‘Let’s move on to the next place.’”

“It did provide a good life,” Rich Conley said. “We had thousands of loyal customers and hundreds of former employees. They all were involved in the store being built up through all the years.”

Starting Monday, employees will begin marking down the items that will go on sale Tuesday. It’s the last mad rush for a family that has been making them for decades.

“We are indebted to our customers and employees and friends who have helped us through the years, and the entire Spokane community,” Rich Conley said. “It’s going to be a loss to us all.”

Rich, 69, said he relishes the idea of slowing down.

“I’m looking forward to having a normal Christmas season without long hours and stocking toys and trying to make a Christmas for everybody else,” he said. “I spent my life selling sporting goods to customers so they could get outdoors and spend time with their families.

“All I ever saw were the boxes,” Conley continued. “Now it’s time to open up the boxes and spend some time with my own grandchildren.”