A GRIP ON SPORTS • Who knows what today will bring. Yesterday was pretty uneventful in the sporting world, but maybe today will be different. We’re not sure. Just like we haven’t been sure for weeks and weeks.

• Everyone likes to make the Bill Murray/Groundhog Day analogy and I get it. Just about every day since mid-March has had a similar feel. Without live sports to break the monotony, it’s hard to distinguish Monday, June 8 from Monday, April 27. 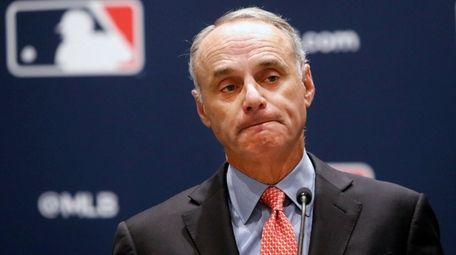 Oh sure, there are events happening in the non-sporting world that are different. We are not blind and are not missing the significance, but we’re talking about sports here. And that’s pretty quiet.

When will it get better? No one is sure. Everyone is making plans, but as fabled philosopher Al Swearengen said on “Deadwood” back in the day, “Announcing your plans is a good way to hear God laugh.” (In case you’re wondering, that little nugget was written by show creator David Milch, who revealed last year he is battling Alzheimer’s.)

Every time you open your favorite news source, look at coronavirus numbers and expert analysis, you may hear a little snicker from above. And not in a funny way.

Still, we cross our fingers and hope for the best.

The NBA and NHL are trying to develop a virus-free bubble in Florida, a safe place to play enough contests to ensure a viable champion – and a whole bunch of money. Major League Baseball is trying to hash out details of a season, but it’s tripping over itself and its players’ concerns en route – as always.

NASCAR and golf are back, albeit without spectators. Tennis and the MLS will return soon. And everyone is trying to get ahead of COVID-19’s expected second wave, one that some epidemiologists feel could be a tsunami in comparison to the first.

For most of us, we just want sports to return to semblance of normal. We work all day and would love to be able to sit down in the evening to watch LeBron James make a game-winning play, Alexander Ovechkin score the game-winning goal or Kyle Seager take an outside fastball to left field.

We haven’t seen such things in years, it seems, though it hadn’t been all that long – except maybe in Seager’s case. Sports needs to return and soon.

After all, patience isn’t the average sports fan’s most consistent virtue.

• Baseball will hold its annual draft, starting tomorrow. It won’t be your dad’s draft, however. It’s been shortened considerably. There will be just five rounds (cut from 40) and cover just two days. It will be televised by the MLB Network, if you are really bored. And it will be a preview of future drafts.

The owners want a streamlined – read, less-expensive – minor league system. That’s obvious. They’ve been working toward it the past couple years. The pandemic has given them the perfect cover to initiate change, not just this year – there is little chance there will be minor league baseball this summer – but down the road.

Yes, this year’s five-round draft is supposedly a one-off. But the motivation to limit costs and contract the minor leagues is certainly not. The professional baseball landscape around the nation is in the midst of a massive change.

WSU: Around the Pac-12, maybe it’s a good time to take stock of the conference. … The Colorado football program seems to be embracing activism among its players. And coach Karl Dorrell has offered a suspended player a way back to the team. … More from UCLA. This time it’s a look at the linebackers. … Arizona State’s players aren’t receiving much in the way of preseason accolades. … In basketball news, Oregon has joined the growing group of college basketball programs that won’t have team activities on Election Day. … Utah is dealing with a basketball signee who wants out of his letter of intent.

Gonzaga: Elsewhere in the WCC, a BYU guard is learning new roles.

EWU: There was no spring football at Eastern this year. What does that mean for the program? Ryan Collingwood did his best to find out. … What’s former Eastern head basketball coach and Gonzaga assistant Ray Giacoletti up to these days? You can find out here.

Seahawks: When the Hawks agreed to terms with veteran running back Carlos Hyde, they knew what they were getting. A seasoned voice in the locker room and an experienced player who can accept a role. Hyde met with the Seattle media yesterday and talked about his role as well as football’s role in the current national discussion about racism.

Mariners: The owners advanced another proposal yesterday, sending the players a 76-game plan that still included more pay cuts. We’ll see how it goes over. … The M’s had a bad season last year. That means they draft early. It’s a big advantage only made bigger over the 40 rounds of the draft. Oh, wait. Just the M’s luck. There are only five rounds and they have just six picks.

• We expect to be passing along some sad news of a personal nature this week. But making a decision concerning a pal who has been a constant companion for nearly a decade is more than difficult. There’s a reason dogs were given the “man’s best friend” label so long ago. All I can say is, it has not been a good morning. Hopefully, there will be another rally – us sports fans always love a good rally, right? – and we’ll have positive news to share tomorrow. Until later …