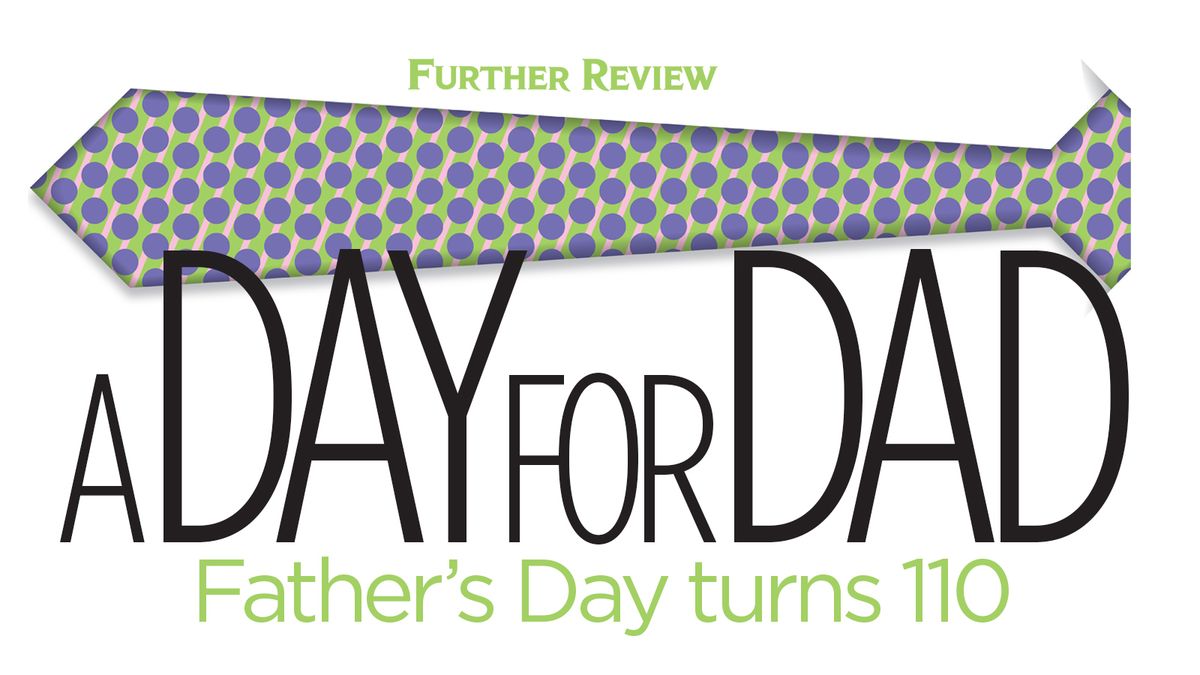 On this date 110 years ago, Spokane’s churches and businesses took time to celebrate their fathers. Here’s how a Spokane daughter sold area residents on the idea and then took Father’s Day national:

DEC. 6, 1907
A explosion in a coal mine in Monongah, West Virginia, kills 362 miners. Two hundred and fifty of them are fathers who leave behind about a thousand fatherless children.

JULY 5, 1908
One of those children, Grace Golden Clayton, suggests to her pastor – Robert T. Webb of Williams Memorial Methodist Episcopal Church South in Fairmont, West Virginia – that they hold a special memorial service for those fathers. A memorial is held – but it’s local and it’s a one-time event.

May 9, 1909
While listening to a Mother’s Day sermon, Sonora Smart Dodd of Spokane has the idea of having a similar day to honor fathers. Her own father, William Jackson Smart, was a Civil War veteran and a widower who raised her and her five younger brothers after her mother died in childbirth with the fifth brother. Sonora was just 16 when that happened. Dodd works with area ministers, merchants and the YMCA to make her proposal happen. Dodd suggests June 5 – her father’s birthday – but that gets pushed back to the third Sunday in June.

June 19, 1910
The first Father’s Day is observed in Spokane. Dodd delivers gifts to handicapped fathers. Boys from the YMCA wear roses on their lapels – red for those with living fathers and white for deceased. Special sermons on fatherhood are presented in Presbyterian and Methodist churches in Spokane. The day is observed throughout the state of Washington, thanks to a proclamation by Gov. M.E. Hay.

1912
Rev. J.H. Berringer of Irvington Methodist Church in Vancouver, Washington, holds a Father’s Day celebration. The church is under the impression this was the first such day to honor fathers.

1913
A bill to introduce a national Father’s Day holiday is introduced in Congress by Rep. J. Hampton Moore of Pennsylvania. Moore introduces the bill at the suggestion of Charlotte Kirkbride and Carrie Sternberg of Philadelphia, who had worked to have Father’s Day observed “in many parts of the country” that June, the New York Times reports.

1914
President Woodrow Wilson approves a resolution that makes Mother’s Day an official celebration, six years after it was proposed.

1915
Harry C. Meek of Lions Club International organizes a Father’s Day celebration on the third Sunday of June: his birthday. His organization, too, believes this is the first such celebration and will honor him as the originator of Father’s Day. Over the years, Meek will make several attempts to push his celebration nationwide.

1916
President Wilson honors Spokane’s Father’s Day celebration by using a special telegraph key set up on his desk at the White House that unfurls a flag in Spokane. He tries to make Father’s Day an official nationwide celebration, but Congress resists, fearing it would become too commercialized – which was already happening with Mother’s Day.

1921
The Governor of Virginia proclaims a Father’s Day, at the request of Mrs. Walter H. Burgess.

1924
President Calvin Coolidge – acting at the urging of Meek – recommends Father’s Day be observed nationwide but declines to make it a national proclamation. His resolution is “to establish more intimate relations between fathers and their children and to impress upon fathers the full measure of their obligations.”

1930s
Dodd returns to Spokane and picks up again promoting a Father’s Day celebration. She’s aided by national trade groups that would benefit from a gift-giving holiday: tie and hat makers, tobacco shops and so on.

1932
Burgess registers “National Father’s Day Association” with the U.S. Patent Office. She reportedly drops any claims to establishing Father’s Day when she learns of Dodd’s efforts.

1957
Sen. Margaret Chase Smith of Maine proposes a national Father’s Day holiday, chastising Congress for honoring mothers but not fathers. “To single out just one of our two parents and omit the other is the most grievous insult imaginable,” Smith writes.

1961
Rep. Walt Horan brings up the topic once again in the House, saying “Father’s Day has gained nationwide observance but it has never been given the official recognition of Congress.”

1970
Congress passes Joint Resolution 187, which calls on U.S. citizens on Father’s Day to “offer public and private expressions of such day to the abiding love and gratitude which they bear for their fathers.”

Each year, the National Retail Federation conducts a survey to see what buyers plan to spend on Father’s Day. This year’s survey of 8,209 U.S. adults was conducted between May 1-8. The margin of error is plus or minus 1.1 percentage points. 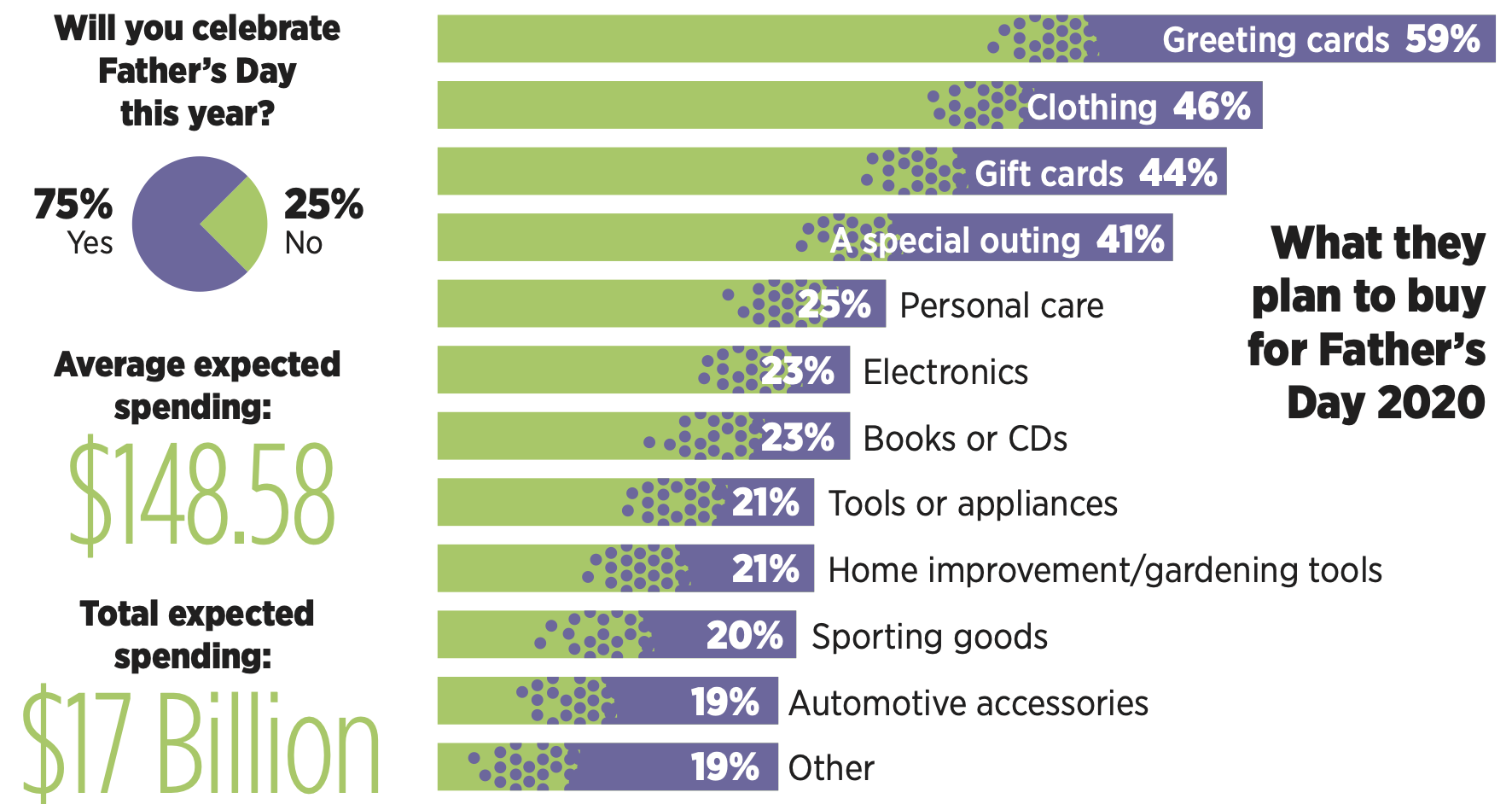