On June 24, 1947 – 73 years ago Wednesday – automatic firefighting system company owner and licensed pilot Kenneth Arnold of Boise, flying from Chehalis to Yakima, spotted nine large metallic-looking objects flying rapidly near Mount Rainier. It would be the first of many reports of “flying saucers” or unidentified flying objects from around the world.

While flying to Yakima on a sales call, Arnold read about a downed Marine C-46 transport that had crashed near Mount Rainier in January. With skies clear and a little time on his hands, Arnold lingered over the area in hopes of spotting the wreckage and earning a $10,000 reward. 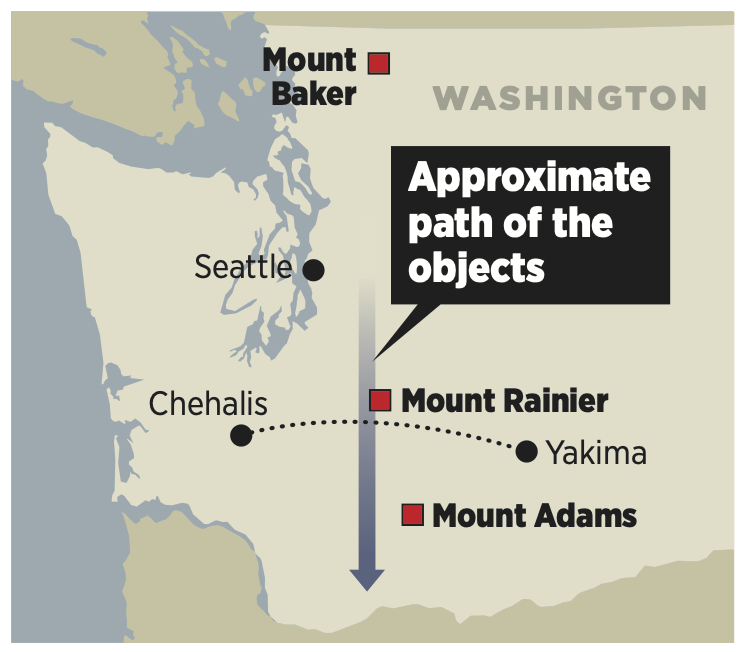 Arnold gave up his search shortly before 3 p.m. and was proceeding to Yakima when a series of bright flashes caught his eye. At first, he thought the objects might be geese, but they seemed to reflect an awful lot of sunlight – “as if someone had started an arc light in front of my eyes,” Arnold would say. And they appeared to be moving incredibly fast. Arnold figured the objects were 25 or 30 miles away and flying at an altitude of 10,000 feet.

Judging from their distance, speed and size against the mountaintops the objects passed in front of and behind, Arnold estimated the size of each to be larger than a DC-4 airliner and moving about 1,200 miles per hour. Which would have suggested the craft were traveling at nearly twice the speed of sound. The first Air Force pilot to break the sound barrier wouldn’t do that until October — four months later.

Once he was back on the ground, Arnold filed a report of his sighting. He said the objects didn’t alarm him – he had just assumed they were some kind of experimental aircraft. But the military was baffled by the report. Both the Army and the FBI would interview Arnold and come away impressed by his “character and apparent integrity.” But they had no clue what Arnold had seen or what might travel that fast. “As far as we know, nothing flies that fast except a V-2 rocket, which travels about 3,500 miles an hour,” an Army spokesman in Washington D.C., told reporters, “And that’s too fast to be seen.”

“Everyone says I’m nuts,” Arnold told the Associated Press. “And I guess I’d say it too if someone else reported those things. But I saw them and watched them closely. It seems impossible, but there it is.” 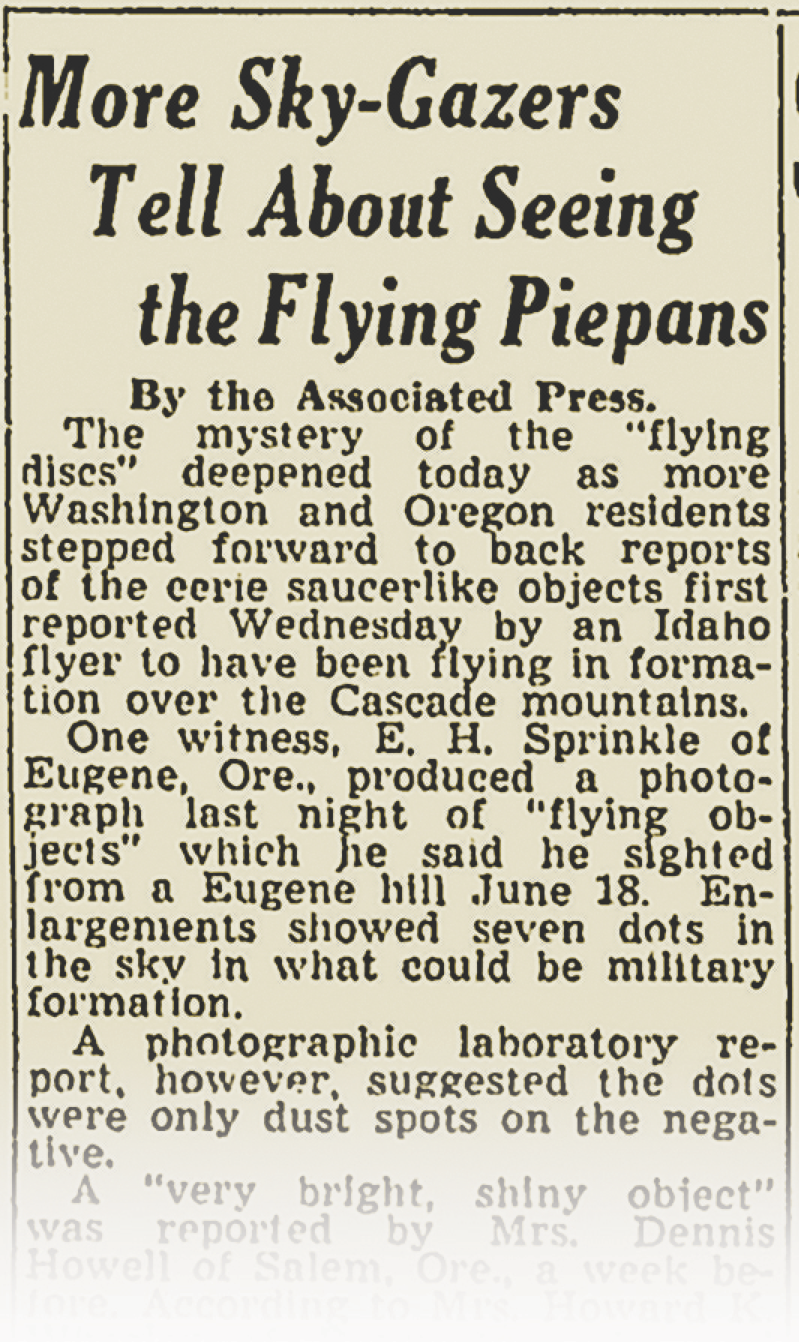 Arnold described the objects as being ”flat like a pie pan” and “saucer shaped.” So that’s what reporters wrote into their news stories. Headlines flashed around the country of “flying saucers.” One notable exception: In a Page 1 story on June 27 – just three days after Kenneth’s encounter‚ the Spokane Daily Chronicle called them “flying piepans.”

Arnold didn’t enjoy the publicity in the least. A preacher in Texas told his flock the sighting was a harbinger of doomsday. Later that week, Arnold was in Pendleton, Oregon, for an air show when a woman in a café recognized him from newspaper reports and ran out of the joint, sobbing: “There’s the man who saw the men from Mars!”

However, Arnold spent $150 on a new camera with a telescopic lens – just to be ready if he saw the “flying piepans” again.

Other UFO sightings of that era

While the Kenneth Arnold incident was one of the first highly-publicized UFO sightings, it would be followed by many others. Newspapers at the time seemed hungry for reports of this type, often playing stories on the front page – even of events hundreds of miles away. Here are some of the more notable examples from a decade or so after Arnold’s incident.

JULY 5, 1947
BOISE, IDAHO
Shortly after takeoff on a flight from Boise to Portland, Oregon, United Airlines Capt. E.J. Smith and his co-pilot, Ralph Stevens, see five flying discs. Smith later tells reporters that, before his own sighting, he had been skeptical of Arnold’s widely-reported account.

JULY 7, 1947
ROSWELL, NEW MEXICO
The Army Air Force reportedly recovers a crashed saucer and alien bodies. The saucer turns out to be a new, top-secret balloon-borne device intended to detect nuclear blasts and there never were any alien bodies. Still, conspiracy theories would persist, 73 years later.

JAN. 7, 1948
FORT KNOX, KENTUCKY
Air National Guard pilot Thomas Mantell is dispatched to investigate a UFO sighting. The object goes into a steep climb. Mantell follows, but has no oxygen gear in his cockpit. He blacks out after he passes 25,000 feet and is killed when his P-51 Mustang crashes.

JULY 24, 1948
MONTGOMERY, ALABAMA
The crew of a DC-3 passenger liner flying from Houston to Atlanta passes a glowing, fast-moving wingless torpedo-shaped aircraft that appears to have two rows of lit windows. Air Force investigators say they probably saw a meteor.

OCT. 10, 1948
FARGO, NORTH DAKOTA
Air Force pilot George Gorman, flying a P-51 Mustang, chases – and is chased by – a rapidly-moving ball of light. Other pilots flying in the area also see the light. Afterwards, a Geiger counter shows Gorman’s plane measures higher in radioactivity than it should have.

MAY 11, 1950
McMINNVILLE, OREGON
A farm couple photographs a slow moving saucer-shaped craft flying over a nearby field. Experts find no evidence the photos had been faked. Skeptics point out the craft is exactly the same shape as the rear-view mirror of a 1961 Ford F-100 pickup.

AUG. 5, 1950
GREAT FALLS, MONTANA
The general manager of the local minor league baseball team uses a 16 mm movie camera to film two silvery objects flying over the city. Air Force experts examine the film but are accused of removing some of the footage.

AUG. 25, 1951
LUBBOCK, TEXAS
Professors of what would become Texas Tech watch groups of 20 to 30 bright lights fly overhead. The lights return over the next few weeks and one student even manages to photograph them. An Air Force investigator would say the lights were actually plover: birds.

JULY 12-29, 1952
WASHINGTON, D.C.
A series of radar sightings of unexplained objects coincides with reports of white moving lights and orange balls of fire, with tails like a comet. While investigating, an Air Force F-94 fighter pilot reports he is surrounded by four white glowing objects.

AUG. 5-6, 1953
RAPID CITY, SOUTH DAKOTA, AND BISMARCK, NORTH DAKOTA
Civilians and military personnel observe colored glowing lights dancing in the skies. Flight controllers follow along on radar as Air Force planes pursue the lights, which manage to stay miles in front of them.

AUG. 21-22, 1955
HOPKINSVILLE, KENTUCKY
Two families report a landed disc-shaped craft near their homes and that they shot at glowing humanoids who peered at them through their windows. Air Force investigators would label the case as a hoax.

JULY 24, 1956
DRAKENSBERG, SOUTH AFRICA
A meteorologist and former Royal Air Force intelligence staffer photographs flying objects. She would later claim to have had repeated contact with occupants of alien craft and that her son was fathered by one of the aliens.