It is a press ... from which shall flow inexhaustible streams ... like a new star it shall scatter the darkness of ignorance” – Johannes Gutenberg

The opening of a new state-of-the-art printing facility in Spokane Valley is the culmination of 581 years of printing technology, going back to Johannes Gutenberg, who developed the first real printing press in Mainz, Germany.

What made Gutenberg’s printing press so special?

The printing press that Gutenberg developed in 1439 did four things that were fairly new in the world of printing:

Movable type: Before Gutenberg, printing was mostly done with wooden blocks. Gutenberg’s idea was to create separate letters, which could be moved around and then reused.

Molten lead casting: If Gutenberg’s plan was to work, he’d need a LOT of those letters. So he came up with a system of creating them in brass and then using those letters to create molds that allowed him to cast more with molten lead.

Oil-based ink: Gutenberg developed his own type of ink – oil-based, rather than water-based – that would stick to metal better than to wood.

A better paper-flattener: Gutenberg used a press that was typically used to press grapes for wine and olives for oil. That’s the big screw-shaped object you see at the left of the illustration above.

The result of all this was that Gutenberg could print books in a fraction of the time it would take to copy them by hand – which was the way it was typically done at the time. He would print 180 copies of a 1,300-page edition of the Bible by 1454, to great acclaim.

But despite its importance to us today, his venture into printing wasn’t financially successful. By 1459, Gutenberg was bankrupt.

A history of printing and publishing

794 AD: The first paper mill is built in Baghdad, in what is now Iraq.

932: Chinese printers begin using wood block printing to create books: Words and drawings are carved in reverse on wood blocks, which are then smeared with ink and pressed against paper.

1041: Movable type made of baked clay is invented, also in China. This allows printers to set up a page to be printed and then reuse those elements to build more pages.

1473: William Caxton prints the first book in English. Three years later, he’ll set up his own print shop in England.

1476: Intaglio printing – in which ink is held in a sunken area on a printing plate, rather than on a raised area – is first used for book illustrations.

1495: Etching – in which sunken areas for intaglio printing are created by acid or some other chemical process – is first used.

1501: Italic type is introduced by Aldus Manutius in Venice, Italy.

1529: Geoffroy Tory in Paris publishes “Chamfleury,” which promotes grammar, punctuation and greater care in the choice of letterforms – what we today call typography.

1538: Juan Pablos becomes the first printer in North America when he begins operating in Mexico City.

1563: Printing in France without permission of the king is outlawed, under penalty of death.

1569: Gerardus Mercator publishes a map of the world. This becomes important in the age of discovery.

1611: The first edition of the King James Bible is published.

1639: “The Bay Psalm Book” becomes the first book to be printed in the American colonies, in Cambridge, Mass.

1690: The first newspaper is published in the American colonies, in Boston: Publick Occurrences, Both Foreign and Domestick.

1698: The first public library in the American colonies opens in Charleston, S.C.

1755: “A Dictionary of the English Language” is published by Samuel Johnson.

1780: A system for measuring the size of typography using “points” – based on a pre-metric French inch – is developed by Francois-Ambrose Didot.

1814: The first steampowered cylindrical printing press, built by Frederick Koenig and Conrad Bauer, is installed at The Times of London.

1827: The New York Sun becomes the first mass-produced newspaper. The era of “the penny press” begins.

1828: Darius Wells introduces a new method of cutting type out of wood and publishes the first catalogue of wood typography.

1841: The first paperback books are published by Tauchnitz Verlag in Germany.

1879: The first color images are printed in newspapers using a process known as Benday – adding color in small dots to form shades or tints.

1886: The first linotype – an automatic typesetting machine – is developed. The New York Tribune becomes the first newspaper to use one.

1902: While trying to develop a way to dehumidify the paper storage area for a New York printer, Willis Carrier accidentally invents air conditioning.

1921: A way of transmitting photographs over telegraph wire is developed.

1949: Phototypesetting – using light, rather than hot metal or wood to create typography for printing – is developed.

1984: The Apple Macintosh computer using a graphical interface – and laserprinters, which had come out in the 1960s – introduce a new era of “desktop publishing.”

What is offset printing?

Offset is how most modern books, magazines and newspapers are printed. 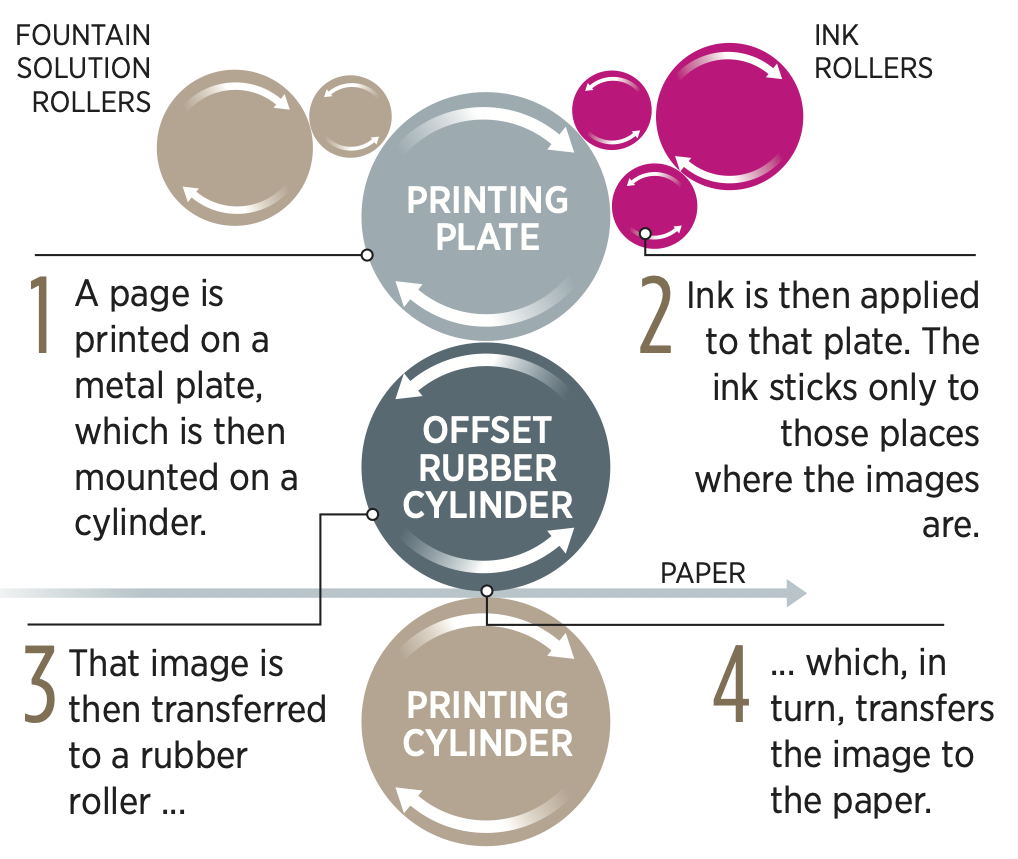 How do you print color and photos?

Printing is fairly straightforward for words, letters, numbers and drawings. But for pictures or for color illustrations, it can be a bit tougher. 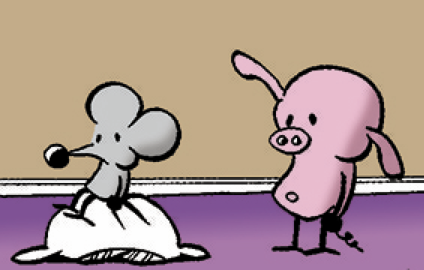 The first thing we do is use computer software to turn a photo or, say, a color comic strip, into little dots. We call this a halftone image. 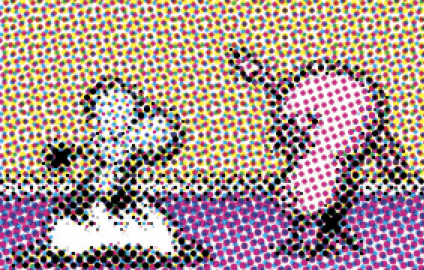 And then we print the page four times, each with a different color of ink:

Everything you see in newspapers and magazines is made of these four inks – in some places, printed on top of each other to make other colors.

If you look at a page under a magnifying glass, you can see the little colored dots. But you don’t really notice them when you’re reading the newspaper.

The Spokesman-Review’s new presses will allow for more accurate placement of these dots, meaning color in your newspaper should be brighter and crisper.