For more information about wolves in Washington visit spokesman.com/topics/wolves/ or wdfw.wa.gov.

On a warm day in March, Ben Maletzke crouched beneath a gaggle of pine trees and examined a slight indentation in the shaded snow at his feet.

Maletzke, the Washington Department of Fish and Wildlife’s statewide wolf specialist, was in the Wedge Wolf pack’s territory north of Colville. At 1 a.m., he’d left his Cle Elum home and driven, with two snowmobiles in tow, the 4 1/2 hours across the state and parked in a dirt lot behind the U.S. Forest Service office.

There he met Grant Samsill, a wildlife conflict specialist in Northeast Washington, and headed into the high country to track wolves.

It’s tough and slow work that requires hours driving snowy Forest Service roads on snowmobiles looking for signs of wolves – that is, scat and tracks.

The information gathered by Maletzke, Samsill and others throughout January and March will be used to create the annual wolf population report released in April.

That report sets a minimum number of wolves and packs in the state and guides management decisions for the year to come. It’s a hotly anticipated piece of research that occasionally draws criticism from those who believe it either undercounts or overcounts the number of wolves.

Maletzke is aware of these complaints, but trusts the methodology and emphasizes the importance of not changing the process midrecovery.

As with most things connected with wolves, criticism, in his view, means he’s doing the right thing.

“When everybody hates you, you’re probably doing it right,” he said. 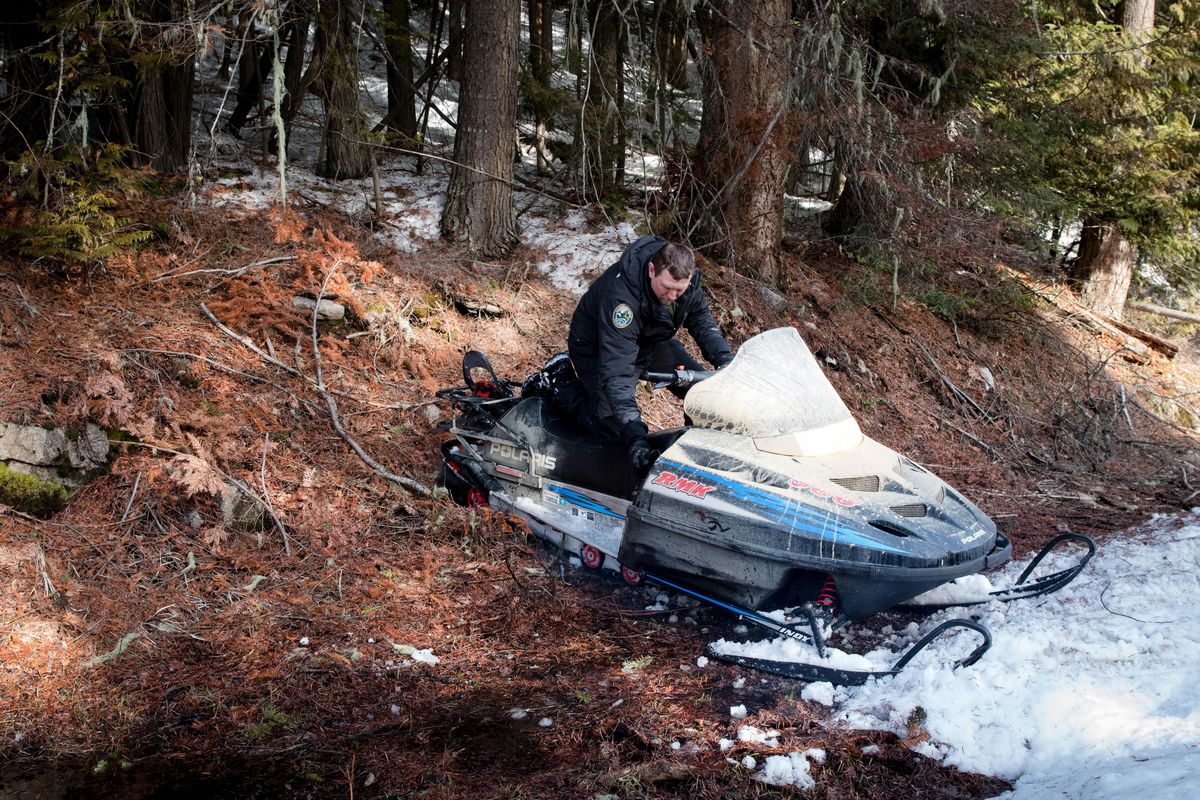 On this particular day, Maletzke and Samsill are traveling through the Wedge Wolf pack territory. Aptly named, it’s a slice of rugged country wedged between the Columbia River and Highway 395, north of Kettle Falls.

According to the 2018 survey, the pack had a minimum count of three wolves but was not considered a successful breeding pair.

The goal is to search for signs of wolves. Maletzke and Samsill’s trained eyes look primarily for paw prints and scat.

At first, they have little luck. It hasn’t snowed in a week or more. Warm temperatures mean the remaining snow has gone through several freeze-thaw cycles, making tracks hard to read.

Even in good conditions, wolves are hard to follow.

“Wolves are incredibly smart individuals. They cover huge territory,” Maletzke said. “They aren’t easy to find. They aren’t behind every tree.”

Although wolf pack territory size can vary, it’s not uncommon for a pack to roam hundreds of square miles.

During the winter, the packs patrol their land looking for food and keeping other wolves at bay. Because packs are territorial, it’s possible for Maletzke and other biologists to go into known pack territories and look for sign. Because wolves don’t usually stray out of their territory in the winter, biologists are relatively confident that the signs they see belong to members of the pack in question.

Wolves mate in the late winter and den in the spring, with pups born usually in late April.

“There is a really high mortality rate for pups. So the population, if you looked at it right after they denned up, you might have a lot of wolves,” Maletzke said.

Instead, biologists survey packs after a full season, allowing wolves to disperse or die before they come to a minimum count. It’s also easier to track wolves in the winter, partly because of the snow and partly because the packs are traveling together.

“The pack travels more as a cohesive unit in the wintertime than any other time of year,” Maletzke said.

For the first few hours, they’ve had little success. They find some tracks that may be wolves, but they’re too melted to tell. But in the afternoon, they come across a set of tracks in shaded snow. They followed what appeared to be a single track for a mile or so until it split into three separate tracks. This information will be combined with previous survey data from the Wedge Pack to come to a minimum pack count, Maletzke said.

Biologists also look at game cameras to try and spot individual wolves and take to the air in helicopters to count collared wolves from the sky. In one case this year, Maletzke said, a citizen sent him a photo from a game camera of six wolves traveling down the road. That visual proof confirmed that particular pack.

Idaho wildlife managers recently started surveying some animal species using camera grids. The technique is relatively new, and a graduate student working with WDFW is looking at doing something similar with audio.

“You could hear a howl from two miles away, whereas with a camera you have to get him to walk right in front of the camera,” he said. “And so you can census a little bit bigger area with fewer recorders.”

Even if WDFW could switch to a different survey methodology, it wouldn’t, Maletzke said. Because the department has been doing surveys the same way since wolves naturally returned to the state in 2008, it has a good set of consistent data.

The way WDFW reports and counts wolves is based off the methodology used by U.S. Fish and Wildlife.

Maltezke said WDFW does look at, and work with, other types of survey work, including some work done by scat-sniffing dogs and a Conservation Northwest camera grid project.

“We try and work together,” Maletzke said.

The survey work becomes political and occasionally controversial because its findings dictate when wolves will no longer be listed as a state endangered species.

As of the 2019 survey, a minimum of 126 wolves, 27 packs and 15 breeding pairs live in the state. The state’s wolf population has grown, on average, 30% per year since the canines naturally returned to Washington in 2008.

Wolves are protected by state endangered species rules in the eastern one-third of the state and remain federally protected in the western two-thirds. According to the state’s wolf recovery plan, wolves can be delisted after 15 successful breeding pairs are documented for three consecutive years or after officials document 18 breeding pairs in one year.

When wolves are delisted – either at the state or federal level – WDFW hopes to have a management plan written and ready to go. Managers anticipate that plan will be finalized in two to three years. The first step in that process is soliciting public comment and input.

The minimum count gathered by Maletzke guides that process.

This year’s results might cause more consternation among some groups because, for the first time since 2008, the Colville Confederated Tribes will not be reporting its wolf numbers. The tribe decided not to invest resources into the count because it “considers the wolves recolonized,” Maletzke said.

That means the number of confirmed wolves reported in April will likely drop. Like Bachman, Conservation Northwest believes the minimum count is an important metric, but it would like to see additional estimates released by WDFW.

“The state’s annual minimum counts are an important gauge of wolf recovery, but it’s critical to keep in mind that they are just that – a confirmed minimum,” Paula Swedeen, Conservation Northwest’s policy director and a member of the state’s Wolf Advisory Group said in an email. “Individual wolves are very difficult to document as they expand to new areas, and our state’s total wolf population is certainly higher than this baseline count. We support WDFW putting out reasonable estimates of the actual population, above these minimum numbers.”