Sixty years ago today, the Soviet Union shot down a U.S. spy plane and took its pilot prisoner. What came to be called “the U-2 incident” would derail peace talks and set back international diplomacy for years. Here’s how it all went down:

The Lockheed U-2 “Dragon Lady” was built for one specific purpose: To fly over top-secret targets at a very high altitude and photograph them for analysis. The plane went into service in 1955 but most folks never heard about them until the U-2 incident in 1960. Lockheed produced 104 U-2 planes through the end of the 1980s. A number of them are still in service.

KEY FACT:
The U-2 could fly 70,000 feet high – more than 13 miles above the surface. At that altitude, it was thought to be out of range of Soviet anti-aircraft missiles of the time.

WHAT WORKED
With its top-secret cameras and CIA-paid pilots, the U-2 program made dozens of flights over Eastern Europe and the Soviet Union, keeping track of bomber bases, missile launch sites and nuclear test sites. By 1960, the U-2 program had photographed about 15 percent of the USSR and contributed to 5,500 intelligence reports.

WHAT DIDN’T
The aircraft was quite large and very thin – even a near missile miss could and did cause the wings to break off and the airframe to break up. Eventually, improvements in Russian surface-to-air missile technology put U-2 overflights at risk. The CIA had grown overconfident after four years of successful missions. 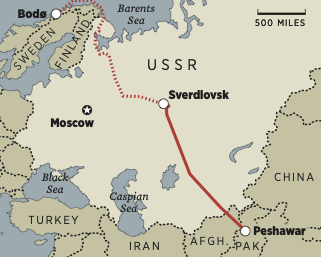 The program’s most experienced pilot – Francis Gary Powers, with 27 missions – was to take off from Peshawar, Pakistan, photograph missile sites in Baikonur and Plesetsk and a plutonium processing plant in Mayak and then land at Bodø, Norway. Bad weather delayed the mission for two days, so Powers finally took off on May 1: A national holiday in the USSR.

KEY FACT:
Powers’ mission was to take him 3,788 miles – 2,900 miles of that through Soviet airspace – and a total of nine hours of flying time.

WHAT WORKED
Despite cloud cover, Powers photographed the cosmodrome at Tyuratam, from where the first Sputnik had launched 2½ years before. He then flew over the industrial center of Sverdlovsk, flipping camera switches on and off, according to his instructions. Powers was about halfway through his mission when disaster struck.

WHAT DIDN’T
With the skies empty, thanks to the holiday, Soviet radar operators easily tracked Powers. They launched 14 surface-to-air missiles at him. One missile hit a MiG-19 fighter jet that was trying to tail Powers. A second exploded close enough to damage Powers’ plane. He bailed out but was unable to activate the U-2’s self-destruct mechanism.

U.S. officials had assured President Dwight Eisenhower that if a U-2 plane ever was shot down, very little would survive the crash. That turned out to not be the case. Soviet officials were able to recover most of Powers’ log books, cameras, maps and his survival kit – including a Russian phrase book and a pen loaded with shellfish toxin that could reportedly kill a man in seconds.

WHAT WORKED
With his aircraft disintegrating around him, Powers was thrown out of the cockpit by centrifugal force, attached by only his oxygen hose. His parachute landed him near a surprised group of Russian farmers. Taken to authorities, Powers did as he had been instructed by the CIA: He answered their questions truthfully.

WHAT DIDN’T
Because he was unable to trigger the U-2’s self-destruct, Soviet officials were able to get a good look at the top-secret spy plane and to see what Powers had been photographing that day. Even smarter, Soviet officials kept quiet about the incident while the U.S. went public with a cover story the CIA had developed years before, just in case.

A cover story arranged in advance claimed the plane was a NASA weather flight that had compass problems and had veered off-course. Photos were distributed to the press to support this story. (That’s one of them at the top of this page: Look closely for the “NASA” label on the tail stripe.)

WHAT WORKED
With Powers flying in radio silence, CIA officials didn’t know for sure he had crashed until he didn’t show up on time in Bodø. The cover story plan was put into action: U.S. officials suggested the pilot could have had oxygen problems and the plane could have flown on into Soviet territory with its autopilot engaged.

WHAT DIDN’T
The whole story fell apart a week later, however, when Soviet leader Nikita Khrushchev (pictured) revealed the USSR had captured the pilot alive. The Eisenhower administration was horribly embarrassed. The incident caused the collapse of a highly anticipated peace summit that had been scheduled later that month in Paris.

Powers – 30 at the time of his crash – had flown F-84 fighters in the 1950s before being recruited into civilian service for the CIA. Powers had asked a supervisor what to do if he were captured by Soviet officials. “You may as well tell them everything,” Powers had been told, “because they’re going to get it out of you anyway.”

KEY FACT:
At first, Powers had tried to not tell his captors so much about his plane or his mission – only to find much of it was being reported in U.S. newspapers. KGB officials found this hilarious, he said.

IN THE USSR ...
As he had been directed by his CIA bosses, Powers answered most questions truthfully. Soviet officials didn’t torture him but did put him through a highly publicized trial (left) for espionage, after which he was sentenced to 10 years: Three in prison and seven at hard labor. Powers would serve just two years.

... AND BACK IN THE U.S.
In 1962, Powers would be exchanged for KGB spy Rudolf Abel. Some politicians would criticize him for not using the self-destruct device aboard his U-2 or his suicide pen. He would be cleared of any wrongdoing and commended for his service. Powers would work as a helicopter pilot for KNBC in Los Angeles. He would die in a crash in 1977.