For more information on which state parks are open visit parks.wa.gov.

Fishing and Hunting regulations can be found at wdfw.wa.gov.

Running buddies Debra Trujillo-Gilbert and Mary Stockinger got up early Tuesday to run their usual 10-mile route, which starts and ends at Riverside State Park’s Bowl and Pitcher trailhead.

The Spokane teachers had the park mostly to themselves when they set out early just before 7 a.m. on the day more than 100 state parks, trails and boating sites across Washington opened for the first time since Gov. Jay Inslee’s “Stay Home, Stay Healthy” order took effect in late March.

Not that Trujillo-Gilbert and Stockinger had entirely abided by the closure.

The pair continued to use parts of the park near the Centennial Trail even when it technically wasn’t allowed, they said, which park rangers didn’t seem to mind since the women weren’t driving to the area.

Both women live near the state park and use it often.

“We bike and run here many times a week,” Stockinger said.

“It has been quieter,” Trujillo-Gilbert said.

But that hasn’t been true for the entire Centennial Trail, Stockinger said. She often bikes in other areas, including Spokane Valley, where she said the trail has been overcrowded, making it nearly impossible to practice social distancing.

“Parts of the trail have been really busy with people out more,” Trujillo-Gilbert said. “Like Mary was saying, there have been just so many people on the Spokane Valley Centennial Trail that it’s just unhealthy.”

Luckily, there’s lots of space to spread out at Riverside, Stockinger said.

Trujillo-Gilbert predicted the park would get busy at about 10 a.m., and she was right. Cars rolled into the park and unloaded bikes, hiking poles and kids ready to spend the day outdoors. 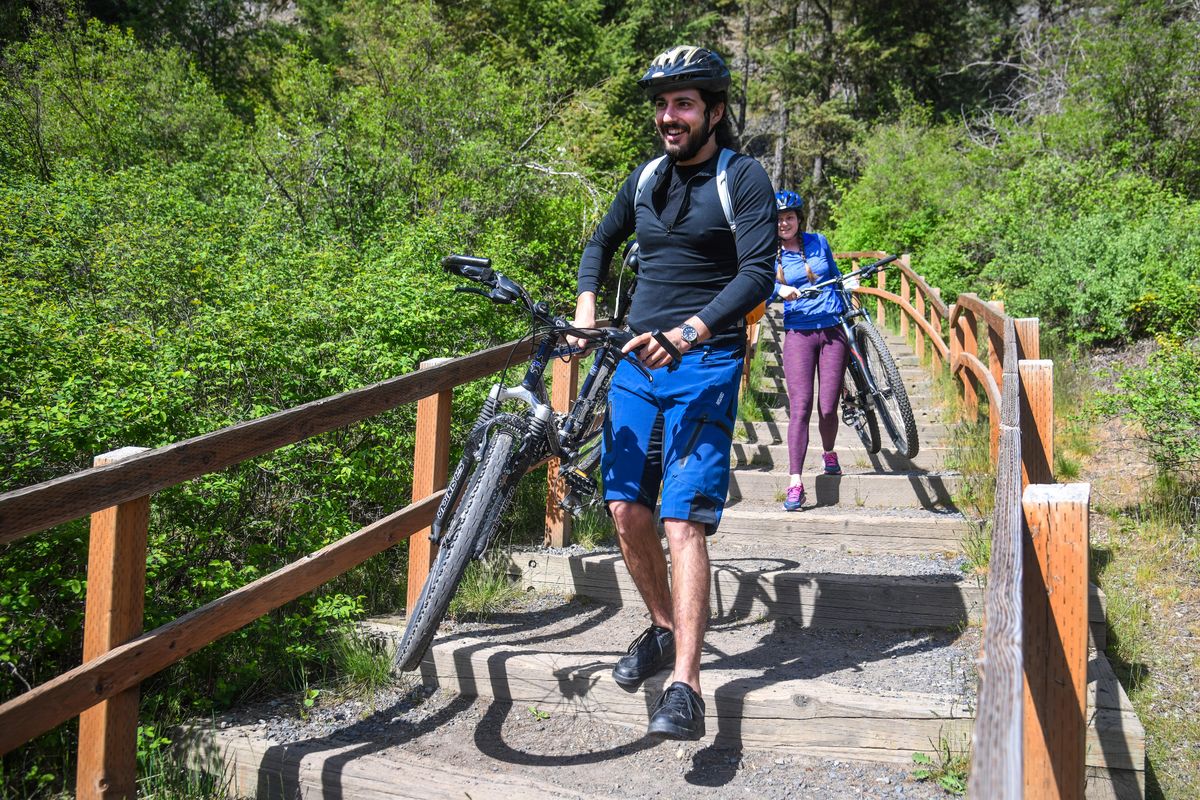 Cayman Strong, left, and Erin Cameron explore Riverside State Park with their bikes near the Bowl & Pitcher area, Tuesday, May 5, 2020, on the first day of state parks reopening because of the COVID-19 pandemic. (Dan Pelle / The Spokesman-Review)

Rob Shoemaker and Kristina Comollo brought their Australian shepherd-husky mix, Milo, out for a midmorning hike.

Comollo has been working from the couple’s apartment in Kendall Yards but decided to take a day off to celebrate the park’s reopening.

“Well, it’s the first day they’re open and we haven’t been hiking since this all started,” she explained.

The pair had expected the park to be teeming with people and were surprised to find only half-full parking lots.

After taking lots of long walks on the Centennial Trail near their apartment, Shoemaker said he was excited to get Milo out for a walk in a different area.

“We do a lot of walking on Centennial, but we can only do that so many times before it’s the same loop,” Comollo said.

Despite the quiet start at Bowl and Pitcher, things were heating up at Riverside State Park’s Nine Mile area by 11 a.m., when the parking area was full and there was a line at the boat launch up the road.

All in all, state parks around the Inland Northwest had “reasonable numbers” of people recreating Tuesday, said Lara Gricar, community outreach and business manager for the region’s state parks.

“People were happy to get back to the park today and recreate,” she said.

She reminded people to post their Discover Pass, park in designated areas and keep dogs on their leashes. Only a limited number of trash cans are out in parks, so individuals need to be extra careful to pack out what they pack in, Gricar said.

While the majority of state park areas are open, not all are. Fisk State Park, Plese Flats launch and St. George’s put-in aren’t likely to open until later this month.

She usually manages the restaurant at the resort, which is closed due to COVID-19, so she has been helping out however else she can.

“It’s not like a normal opening day, but all of the boats are rented out,” Durkee said. “A lot of families are able to get out and do some quality time outdoors.”

She said most fishermen are coming back with something to show for it.

“We haven’t heard of any big lunkers,” Durkee said.