There was a moment in the 1983 movie about the early history of NASA, “The Right Stuff,” when an astronaut comments: “No bucks, no Buck Rogers.” Space travel is expensive.

It cost NASA about $25.4 billion to put six missions on the moon between 1969 and 1972 – that would be about $283 billion in today’s money. The space shuttle program cost $209 billion between 1972 and 2011 – about $1.6 billion per flight. And NASA currently pays Russia $86 million per seat to fly its astronauts to the International Space Station.

No wonder only three nations have successfully launched crews into space. 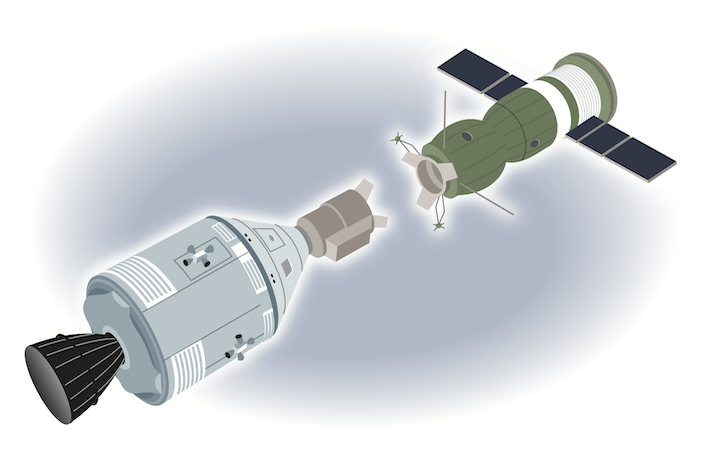 NASA launched three astronauts aboard its final Apollo spacecraft to hook up in Earth orbit with two cosmonauts aboard a Soyuz spacecraft. The craft flew together for two days. As a goodwill gesture, astronauts spoke Russian and the Soviets spoke English during the joint part of the mission.

American/Russian cooperation in space took another huge step foward in February 1994 when Sergei Krikalev became the first cosmonaut to ride an American space shuttle into orbit.

In June 1995, Atlantis would dock with the Russian space station Mir to deliver two cosmonauts and to pick up two more – plus NASA astronaut Norm Thagard – and return them to Earth.

Over the next three years, NASA would fly eight more missions to Mir, carrying equipment, supplies and crew members for extended stays.

Shuttle missions to the ISS

The space shuttle was a huge part of the construction of the International Space Station. While the first section of the ISS, Zarya, was launched from Russia in November 1998, the Shuttle Endeavour blasted off two weeks later with the second section, Unity.

After that, shuttles made 27 more trips to the growing station, ferrying modules, solar arrays, docking modules and various other components.

With the retirement of NASA’s space shuttle fleet in 2011, the U.S. began paying Russia to ferry its astronauts to and from the ISS via its Soyuz spacecraft. That cost about $35 million a seat in the beginning but has more than doubled since then. NASA hopes to end that practice this year as private spacecraft begin operating crewed missions.

China launched its first crewed space mission on Oct. 15, 2003. In the 17 years since, China has launched only five more crews. It has launched two Tiangong space stations – a crew spent 32 days there in 2016.

The U.S. has banned most cooperation with Chinese space efforts due to concerns over national security. This prevents China from participating in the ISS program.

Last week, China announced it would launch a permanent space station and send four crewed missions to that station within the next two years as it begins operating its next generation of spacecraft and launch vehicles.

Other nations in space

• As early as the 1980s, France pressed the European Space Agency to develop a crew launch vehicle. Plans for a resuable space shuttle called Hermes were canceled in 1995. Since then, the ESA has joined forces with NASA to develop NASA’s Orion spacecraft and with Sierra Nevada Corp. for its Dream Chaser space vehicle.

• Japan had hoped to have a shuttle-like space plane operating by 2022, but those plans have been put on hold.

• India hopes to test-fly its Gaganyaan spacecraft by the end of this year and put a crew in space by 2022.