Submit your own patterns

For beginning tiers, Josh Mills has some advice.

First, take a lesson, he said.

Silver Bow Fly Shop offers classes in the fall and winter months and will post that schedule (barring COVID-19 restrictions) in September.

Second, Mills recommends buying a good vice and a good pair of scissors, two things people tend to scrimp on.

Most mornings, between 5:30 and 7 , Josh Mills sits hunched over a collection of feathers, thread, scissors and doodads that would put an art teacher to shame.

As the sun rises (and while his kids are still sleeping) he creates fly fishing flies.

“It’s more of an art project than fishing,” he said. “If you ever go to a person’s fly tying desk that’s organized, they’re psycho.”

It’s a passion project that started in the early 2000s when he took a tie-flying class at Spokane’s Silver Bow Fly Shop. Since then, he’s refined his skills. Last year, two of his fly patterns were accepted by Umpqua Feather Merchants and are being sold in its 2021 catalogue. Mills will receive a percentage from those sales, although he hopes to donate that money to the Wild Steelhead Coalition.

Mills, who works for Backcountry Hunters and Anglers, is a signature tier for the fly fishing company based in Colorado. Becoming a signature tier is a competitive process, said Russ Miller, the director of marketing for Umpqua.

On average, the company receives more than 1,000 fly patterns a year. Most years, it only accepts 200. There are 240 signature tiers internationally. A panel of five sits on the “Fly Committee” and reviews the submissions. Each year, it looks to fill out different sections of the catalogue, whether its dry flies, steelhead specific flies or otherwise.

“Last year was a big steelhead push for us,” Miller said. “And Josh’s name came up.”

The company is also looking for general creativity and newness, he said.

“You’re always looking for something that pushes the boundaries of what the fly is intended to do,” he said. 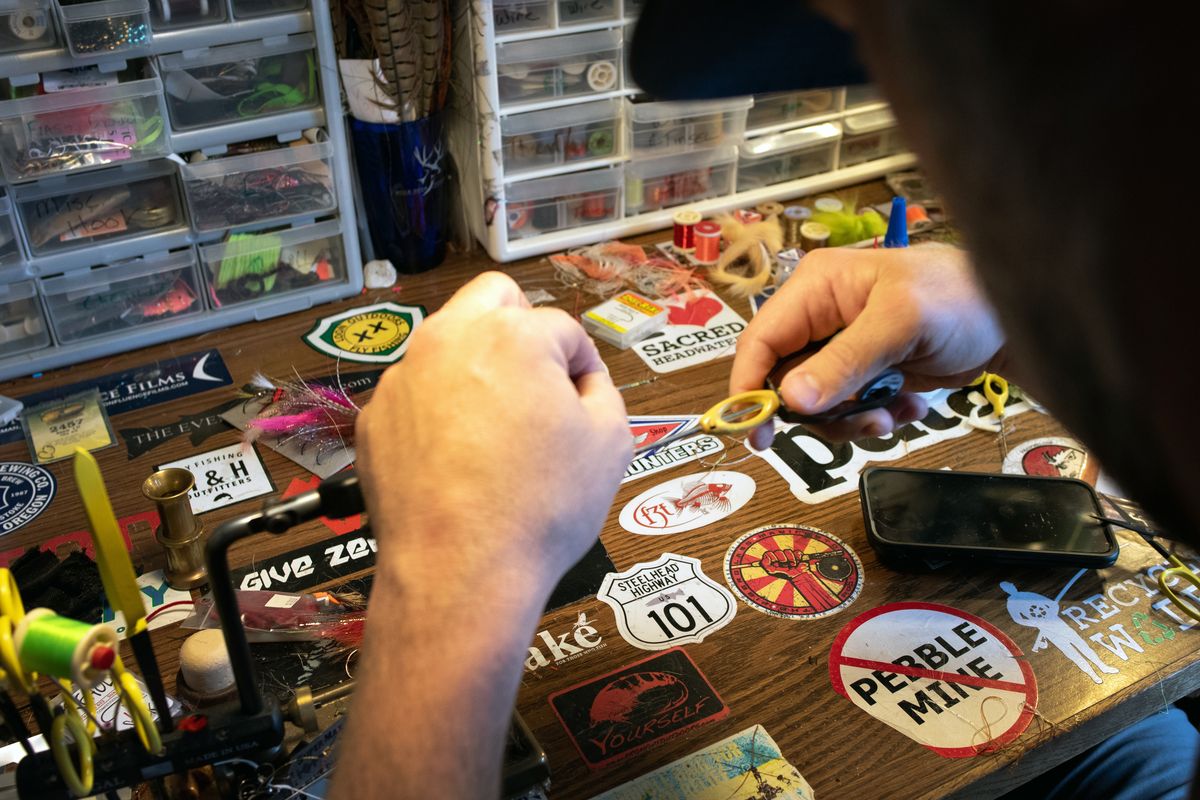 Josh Mills works on a fly in his Spokane area home. Mills wakes up early each morning to tie flies. (Eli Francovich/The Spokesman-Review)

That’s where Mills finds joy and challenge in the process. It’s a creative endeavor that provides tangible results – a fish on the line. For Mills, a lifelong hunter and angler, tying his own flies helps him use all parts of the animals he kills.

“There are certain things like pheasant tails that you could never bear to throw away,” he said. “How can we repurpose some of these things and create this loop of connectivity?”

Mills started fly fishing in the late 1990s and quickly became hooked on steelhead fishing. That remains his favorite type of fly to tie.

“A lot of the times you just create,” he said. “ ‘OK, I kinda want to do something like this today.’ There is no hard and fast (rules) to it. Steelhead, they are not keying in on a specific bug.”

That’s in contrast to trout flies, which attempt to mimic or match the look and movement of a bug. Besides feathers, Mills uses fur and hair from deer and other animals, and synthetic materials. Recently, he bought a cat fur brush at a thrift shop because it’s particularly good at removing the guard hairs from deer hair.

“You go down the rabbit hole,” he said. “Last year, I took fish vertebrae and made a popper … it chugs across the water and makes a lot of disturbance.”

Mills submitted a fly pattern to Umpqua in 2016 but was rejected. That rejection letter hangs on his wall as a reminder that he can improve.

Fly patterns accepted by Umpqua are produced in India, Sri Lanka and Thailand at five factories that work exclusively with Umpqua, Miller said. When Umpqua started 50 years ago, Miller said most flies were tied by local tiers and sold by regional fly fishing shop.

The founder of Umpqua, Dennis Black, had another idea. Why not sell regional patterns nationally? Black traveled in Sri Lanka and trained some craftsmen how to tie flies. When he came back to the United States, he started the signature tie flying program, Miller said.

“Let us take these well-known regional guys, who are kind of the superstars of their region, and let’s put them on a national platform,” Miller said. “And have them design flies and produce flies.”

Mills is quick to emphasize that he’s not necessarily the best tie flyer in the area and still has lots to learn.

“It’s more of a personal accomplishment,” he said. “Like I said, there are much better fly tiers out there in the region and guys that can spin circles around me, for sure.”

Mills found a way to use his passion to give back. In 2019, he raised more than $40,000 for victims of Hurricane Dorian by tying and auctioning off flies. He’s run similar fundraisers since then.

“Fishing is inherently a selfish activity,” he said. “It’s one-on-one most of the time. How do I benefit others through my enjoyment?”