OLYMPIA – The statue of pioneer Marcus Whitman – a missionary whose story had been cast as heroic in Washington state history but is now looked upon by many as suspect and partly to blame for the brutality inflicted on native peoples – will be removed from the U.S. Capitol and replaced with a statue of tribal treaty rights activist Billy Frank Jr. 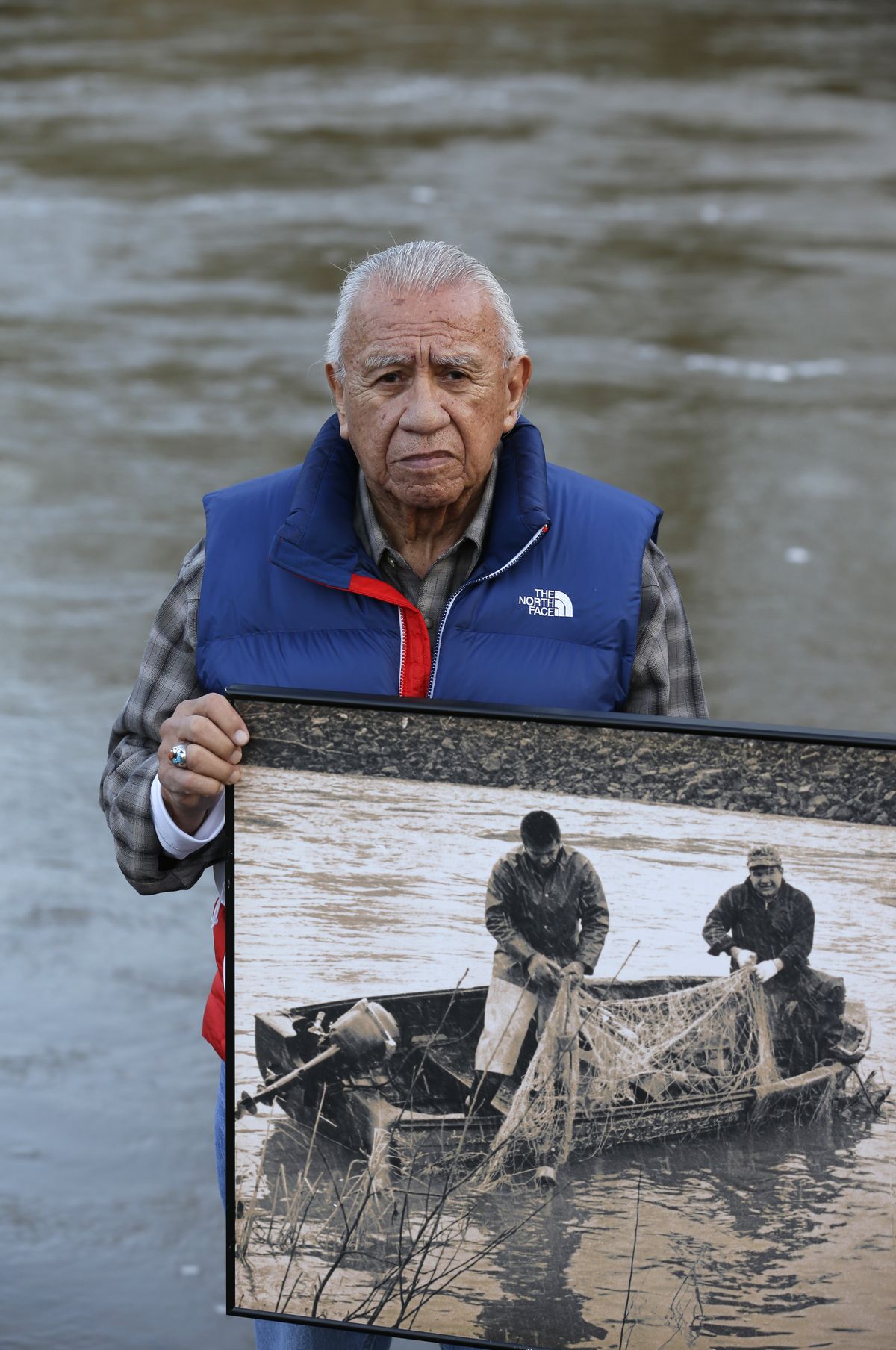 FILE - In this Monday, Jan. 13, 2014, file photo Billy Frank Jr., a Nisqually tribal elder who was arrested dozens of times while trying to assert his native fishing rights during the Fish Wars of the 1960s and ‘70s, poses for a photo while holding a late 1960s photo of himself, left, fishing with Don McCloud, near Frank’s Landing on the Nisqually River in Nisqually, Wash. Gov. Jay Inslee on Wednesday, April 14, 2021, signed a measure that starts the process of honoring the late Frank, who championed treaty rights and protecting the environment with a statue at the U.S. Capitol. (AP Photo/Ted S. Warren, File) ORG XMIT: LA302 (Ted S. Warren)

At the Wa He Lut Indian School in Olympia, among members of the Nisqually tribe, Gov. Jay Inslee signed a bill Wednesday to replace Washington’s statue of Whitman in the National Statuary Hall with a statue of Frank, a Nisqually tribal member and Native American activist.

“We’re sending to the U.S. Capitol the best of the state of Washington,” Inslee said.

Inslee called Frank a “warrior of justice” who was dedicated to the highest values the state holds: justice and protecting its natural resources.

Frank’s legacy stands in stark contrast with Whitman, who was among the first American settlers of Washington state. He established a school mission near Walla Walla in an attempt to convert the Cayuse and Nez Perce tribes. Whitman College, Whitman County, several other schools and a national forest all bear his name.

For decades, Harden said Whitman was lauded as a hero who was killed by those he was trying to save, but much of his story is due in part to lies told by Rev. Henry Spalding, who traveled with Whitman. Spalding’s false account painted Whitman as a hero who helped save the Oregon Territory from the British after pleading with the president to send more troops and settlers westward.

Spalding’s take, however, was “one of the greatest frauds of all time,” Harden said.

In reality, Whitman and his wife were unsuccessful in their attempt to convert tribal members, Harden said. Realistically, they only converted maybe two people.

Settlers brought measles to the area, which quickly spread through the tribe, killing half of their children and many adults. Angry about the increase in white settlers and blaming Whitman for the measles outbreak, the tribe killed Whitman, his wife and 11 others.

Harden said the false story surrounding Whitman led to even more westward migration that would end in deaths and stolen land of tribal communities. It also led to his statue being placed in the U.S. Capitol in the 1950s.

“His removal from the Capitol, I think, is an apt symbol of how there’s a better and more historically accurate version of how the West was settled,” Harden said. “Land was taken from the tribal people who lived there, and there was much about it that wasn’t glorious.”

Replacing Whitman’s statue with Frank, who was a treaty rights activist, is “significant and important,” Harden said.

Frank, who died in 2014, is known for his work to protect endangered salmon and the treaty rights of Washington tribes to fish. He organized “fish-ins” to reassert tribal fishing rights, which led to the 1974 United States v. Washington decision, which reaffirmed tribal co-management of salmon resources in Washington.

The statue bill passed the state House of Representatives 92-5 in early March and passed the state Senate 44-5 last week. It requires Inslee to send a written request to the U.S. Joint Committee on the Library of Congress by September. It also creates the Billy Frank Jr. National Statuary Hall Committee, which will represent the state in the replacement process.

“Billy will tell the story of who we are,” bill sponsor Rep. Debra Lekanoff said at the bill signing. Lekanoff, D-Bow, is the only Native American person in the state Legislature.

Frank’s son, Willie Frank III, said he and his family have fished in the same area where his father was arrested more than 50 times for fighting to protect treaty rights. He said the opportunity to acknowledge one of their own in Washington, D.C., is an honor.

“This is for tribes throughout Indian Country,” the Nisqually tribal councilman said.

Frank’s statue will replace the statue of Whitman, which has been in the Capitol since 1953. Each state gets two statues to represent them in the hall. Washington’s second is Mother Joseph, who helped open some of the state’s first hospitals.

The bill requires Inslee to work with Walla Walla County, the home of the mission that Whitman established in 1836, to relocate the Whitman statue. A separate statue of Whitman currently exists in Walla Walla.

Discussions to replace the statue with Frank are not new to the Legislature. A bill to seek input on replacing Whitman came up in 2019 but stalled. At the time, no replacement was decided.

At the time, bill sponsor Sen. Reuven Carlyle, D-Seattle, said he was trying to start a conversation about who should have the state’s highest honor.

This year, sponsor Lekanoff said replacing Whitman with Frank would be a step toward healing and a recognition of the first Americans. Frank’s statue would be a sign of history that is more of “a reflection of everyone,” she said in a speech to the House State Government and Tribal Relations Committee.

In a time of finding balance between all communities, Lekanoff said “there’s no one better.”

“When people visit the U.S. Capitol, they get the unique opportunity to walk the halls of Congress and see statues of some of the men and women who helped shape America’s illustrious history,” he wrote in a statement. “While Cathy is disappointed by the decision to change one of Washington’s statues, she recognizes that this choice was the state’s to make.”

“His statue will serve as a reminder to all of us in Congress about the importance of respecting tribal treaty rights and protecting and restoring critical salmon populations,” Murray said in a statement.

“At a time when so many voices in our country are fighting for racial equity and social justice, it is fitting that we will be sharing Billy Frank Jr.’s story with the rest of the country,” she said.