Jon Swett, the principal at Shaw Middle School, has a bold idea for the first day of school.

On the morning of Sept. 2, Swett and his teachers will open the doors of their shiny new building, greet their students and walk them to class.

Inside, they will share the bright walls, open spaces and big windows that look out to a world of new possibilities.

If that sounds bit idealistic, so be it. But if education is about relationships, Spokane Public Schools has made one of the biggest investments in its history – more than $70 million – to show it by connecting with the young people of northeast Spokane.

The big idea also ties the new Shaw Middle School to a new Hillyard Community Campus, which also will include the On Track Academy, a shared library and a community outreach center.

Time will tell how transformational the new campus will be; that depends partly on the student. However, the grownups are having a hard time containing their enthusiasm over a concept that has been years in the making.

Several years ago, Swett was the district’s director of secondary schools and engaged in conversations about the future of Shaw.

“We had also talked about On Track (Academy),” Swett said. “And we talked about this unique piece of property, and before long the conversation turned to why we should be thinking about doing something more than just building a middle school.”

Amber Waldref, director of The Zone, a nonprofit partnership centered in northeast Spokane, is looking forward to strengthening its partnership with the district.

“Obviously they did extensive work to make sure the new buildings would be a great learning experience … but they took it a step further and addressed how this fits into a greater system of supports,” Waldref said. 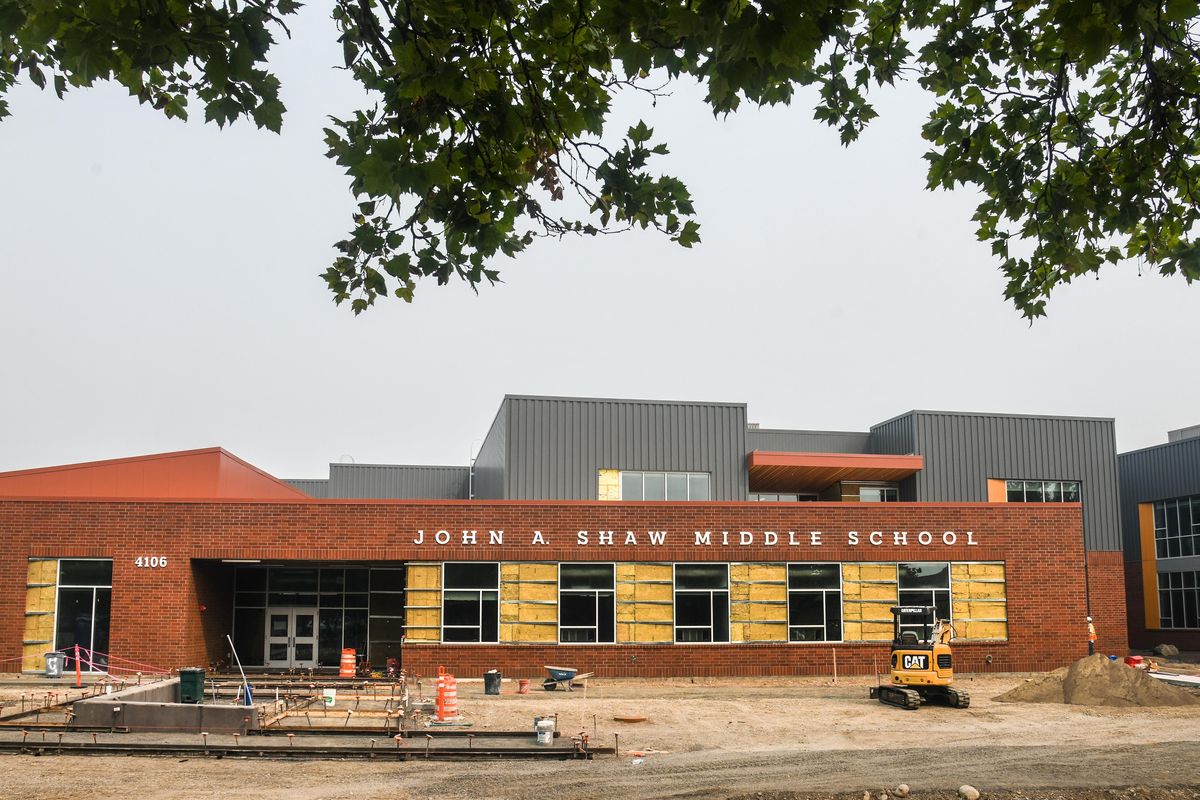 The new John A. Shaw Middle School is nearing completion for the start of the 2021 school year. (DAN PELLE/THE SPOKESMAN-REVIEW)

Greg Forsyth, the district’s director of capital projects, talked last week about the open spaces at both schools while workers were still putting in the finishing touches.

A former teacher in northeast Spokane, Forsyth explained the need to replace the old On Track facility, which consisted largely of portables.

“This new space will energize kids because they won’t feel they were going into a space that was made for someone else,” Forsyth said. “There’s something to say when you’re valued – not that they weren’t valued before – but this is at a different level.”

A new vision for middle school

The old Shaw Middle School was a late-1950s building with long, dark hallways that led to conventional classrooms.

Little had changed 40 years later, when the district built Chase Middle School on the South Hill. It was energy-efficient, Forsyth said, partly because “back then, we didn’t know how to make really good glass – so we made very little.”

The new Shaw is the best of both, energy saving and uplifting at the same time. The main entrance gives way to a spacious commons that’s sure to be a gathering place for meals and much more.

“It’s the first thing you see when you walk into the building,” an appreciative Waldref said this week. “To have a family liaison that works with families and not just the child is very important.”

The building fans out into neighborhoods – don’t call them wings – that will be grouped by grade level. This year, Shaw will serve only seventh- and eighth-graders; sixth-graders will join them next year, when two new middle schools go online in north Spokane.

Neighborhoods will be divided into four rooms for the core subjects of math, English, social studies and science, while other classes will be taught in special areas. Each neighborhood has breakout rooms for small-group activities.

Upper floors look out on to green spaces to the east and northeast. To the north are the remains of the old Shaw gymnasium. It would have been torn down by now but for the discovery of asbestos under the floor.

“We have to be careful,” said Forsyth, who expects the teardown to be done in October. The staff parking lot will take its place.

The new gym is massive, with two full-size courts for physical education, competition and adult recreation leagues – another nod to the city-school partnership that led to the landmark $495 million capital bond that paid for it.

There’s also room to play outside in the form of a netted, low-silhouetted climbing area. Painted bright orange, it’s recognition that kids don’t want to grow up too fast. The district knows that, because they made it a point to talk to sixth-graders about what they desire in a middle school.

“We wanted to push some of the assets of elementary school up,” Forsyth said. “For too long, middle school was having high school pushed down on it.”

A library for everyone

Perhaps nothing speaks to the city-school partnership more than the transformation of the 4100 block of North Cook Street.

Until now, speeding cars divided the school from the Northeast Community Center. Now the partners are “calming” Cook into a unifying feature for kids, families, neighborhood groups and seniors who just want to drop by and check out a book or use the family resource center.

Through landscaping and other devices, the traffic on Cook will be slowed enough to give pedestrians safe passage to the new library.

The product of months of meetings, the 14,000-square-foot room will replace the current Hillyard library. It will be divided between student and public sections.

Located on Cook Street, it will be open to students only from 8:30 a.m. to 9 a.m. for before-school checkouts. After a one-hour closure, the public will have access through a separate entrance from 10 a.m. to 7 p.m. to the main section, which totals 10,000 square feet.

Students and teachers will always have access to the remaining 4,000 square feet. During the shared time, the spaces will be divided by a bi-fold glass barrier that descends from the ceiling.

“Everybody can see everybody,” Forsyth said in acknowledgment of parental concerns over the shared space. “Passive supervision is something that is very powerful.”

“We have complete structural separation,” Forsyth said. “And we have adult supervision of the students at all times. Forsyth said some teachers may bring students into the public area.

A fresh start for On Track Academy

Perhaps the biggest upgrade is happening at On Track, where students will no longer be learning inside dreary portables.

The school also has a new name: Lisa Mattson On Track Academy, to honor the school’s first and only principal.

That was nice, but Mattson is more excited about the new digs.

“I’m really looking forward to seeing the students’ faces and how they’re feeling,” said Mattson, who is planning an open house for next week.

“That’s the creative part, and that’s why they want to have a space that continually adjusts,” said Shawn Jordan, the district’s new chief operations officer.

“We’re really pleased that students told us what they wanted, and that we were able to deliver,” Mattson said. “The flexibility of spaces, the science suite … the students will really be able to express their brilliance.”

The new building also will meet them in the moments, which are often full of stress. Having struggled in conventional high schools, some students are facing the most basic stresses.

“A lot of these students are in transition, and we want to make sure they get all the assets they need,” Forsyth said. To that end, On Track has laundry facilities, a kitchenette and other basics.

Gym and fitness facilities can be accessed at Shaw, just across the grass field.

“We have counselors, of course,” Forsyth said. “But we feel that in the past, we haven’t handled the physical aspects as well as we could have.”