Most people have at least one box in their house, especially during the pandemic. We keep them on our desks, at our bedside tables, in our bathrooms – tissue boxes are so much a part of our home interiors we hardly notice them until they’re empty.

Darlene Kruse thinks she knows why.

“They’re kind of boring,” she said.

So, during the long months of the shutdown, she picked up her tapestry needle and resumed a project she’d started before COVID-19. Using party yarn, plastic canvas and lots of imagination, she’s made 70 tissue box covers and counting.

The project not only gives her mind a creative outlet, it’s also had health benefits.

“I wanted to lose weight,” said Kruse. “I don’t eat while I’m doing it. It takes the place of snacking.” 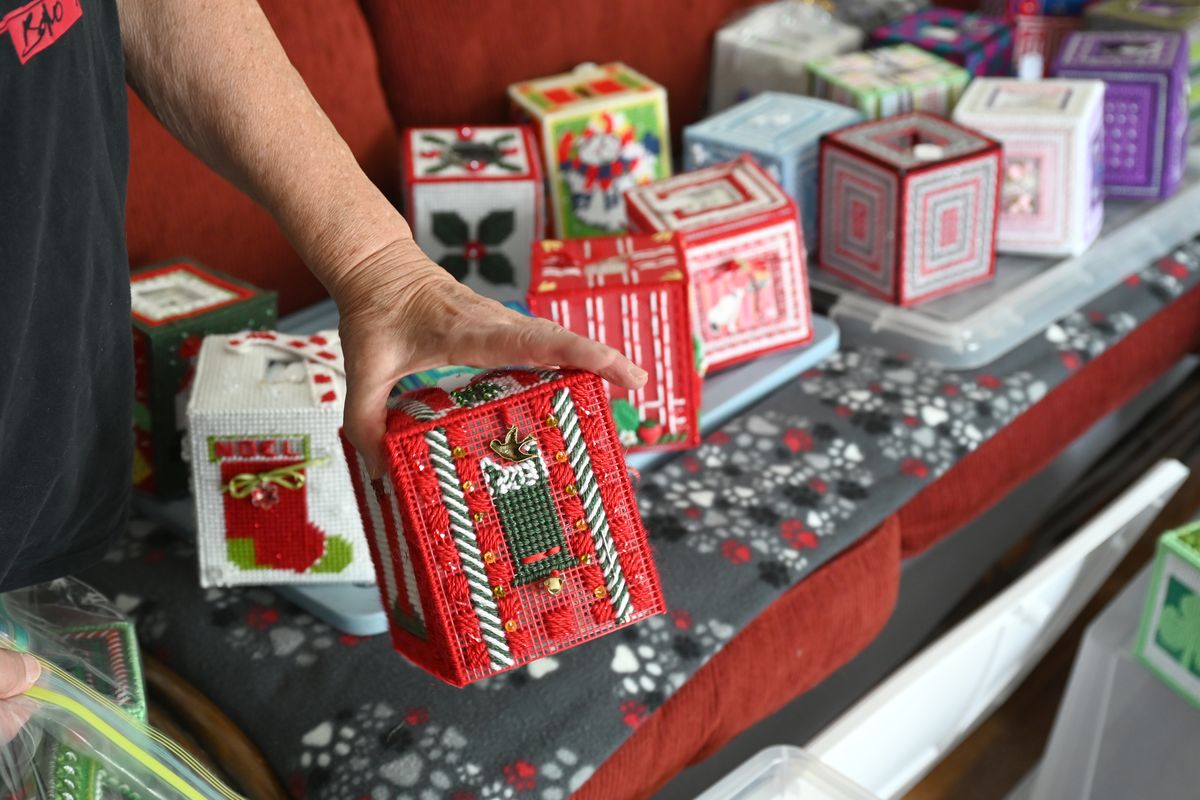 She only crafts covers for boutique-size boxes, as they better display her handiwork.

“I buy the plastic canvas sheets by the dozen,” she said. “I cut them into fours and cut a square for the top.”

Most of the designs stem from her fertile imagination. In addition to holiday themes like Christmas, St. Patrick’s Day, Mardi Gras and Independence Day, Kruse has crafted covers that appeal to cat lovers, coffee drinkers and Seahawks fans. Many of them feature meticulous hand beadwork and whimsical charms.

“It’s my version of a coffee klatch,” she said.

One of her unique additions was stitching small windows on some covers, so she could personalize the design.

Her inspiration comes from many things. As an avid gardener, she created a Japanese-themed cover featuring bonsai and ikebana (a Japanese floral arrangement). She even stitched the symbol for happiness on one side next to a tiny fan.

A visit to Seattle with family prompted one of her favorites – a tribute to Chihuly glass.

“We went to see his famous glassworks, and it inspired me,” Kruse said.

No detail is too small for her nimble fingers.

She’s still working on mastering a lifelike rose for a musical design that includes piano keys, musical notes and a blooming rose.

“It’s really hard to make the roses look like roses,’ she said.

Kruse uses a rainbow of colors in her creations with one notable exception.

Each cover takes about a week to complete, and now that she’s amassed so many she’s considering selling them at craft fairs this fall. Her daughter is working on a website for Kruse’s creations.

Craftiness comes naturally to Kruse, who learned to sew at age 10.

“I made my own clothes and my kids’ clothes when they were younger,” she said.

Then she spent 20 years as an Express site director for the Spokane Public Schools child care program, where teaching crafts was part of her job.

“When you spend your career creating projects, it’s hard to turn it off.”