Under threat of legal enforcement from the city, the occupants of dozens of tents outside City Hall packed up and moved along amid a steady snowfall on Thursday morning.

Many people on Thursday were heading to a vacant plot of land near Freya Street and Second Avenue. Only a handful of tents remained on the sidewalks around City Hall on Thursday afternoon.

The city issued 48-hour notices on Tuesday warning the campers that their property would be cleared from the site. City officials stressed that people would be allowed to continue to protest outside City Hall, but they argued that the tents obstructed access to City Hall and posed a health risk.

As the encampment dispersed on Thursday, advocates for the homeless argued that the city still has not provided enough shelter, particularly for adult women and coed couples. They suggested the city’s enforcement of a 48-hour notice outside City Hall would only push campers elsewhere, not solve the city’s shelter problem. 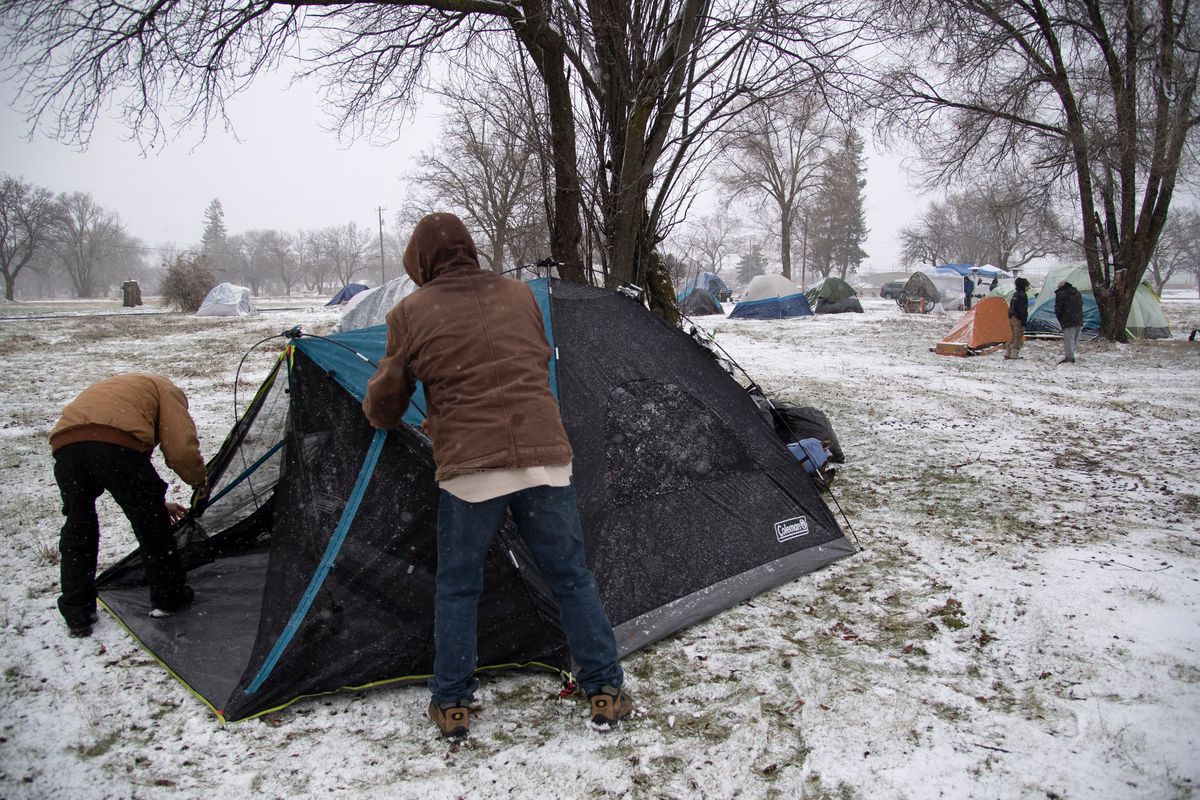 Campers who had set up tents at Spokane City Hall set up their tents again in an empty lot in east Spokane last month after they were warned to leave city hall. The camp had been at Spokane City Hall where participants were protesting the city’s homeless response. (Jesse Tinsley/The Spokesman-Review)

Some people packing up Thursday morning said they were unsure where they were headed, but opted to leave because they did not want to get ensnared in the criminal justice system.

People also faced the risk of having their belongings removed if they stayed.

Few tents remained on Thursday afternoon, and city spokesman Brian Coddington said the city’s expectation was that the property would be moved.

“The goal was to have communication with those camped out in front of City Hall and establish a set of expectations for those who were there, all while respecting the protest and free speech,” Coddington said. “Today’s voluntary compliance would suggest that the dialogue was effective.”

Jewels Helping Hands, a nonprofit homeless services provider, maintained a presence at the City Hall encampment, which mirrored a similar protest that occurred in 2018.

Jewels has offered to oversee a tent city through the winter, but the city has displayed no interest in taking up the offer.

On Thursday morning the organization helped dozens of people haul their tents and possessions to the site near Freya Street.

Already, the new encampment has been told it will be issued a 72-hour notice to vacate by Washington State Patrol, according to Jewels Helping Hands founder Julie Garcia.

Marilyn Darilek was among the several people who gathered outside City Hall to protest the city’s homeless policies. She is a member of the League of Women Voters of the Spokane Area, which has called on the city to substantially increase 24/7 shelter capacity with fewer restrictions on guests.

“This is a human issue and a people matter,” Darilek said. “I know we can do better.”

The city-owned shelter at Cannon Street, which serves both adult men and women, has consistently been at capacity. The same goes for Hope House, which serves adult women.

But city officials acknowledge that capacity in 24/7 shelters has been strained, leaving the city unable to legally enforce its camping ordinance.

In order to enforce the law against camping on public property, city law mandates that there be “available shelter space for the individual/s engaging in otherwise prohibited camping conduct.”

On its 48-hour notices left at the City Hall encampment on Tuesday, the city threatened to cite occupants with obstructing the public right of way. That law does not require that shelter space be available in order to be enforced. A violation is considered a civil infraction and would not result in a criminal charge.

At the request of Mayor Nadine Woodward’s administration, the City Council approved funding Monday for up to 40 hotel rooms every night when shelters are operating at capacity. Those rooms will be prioritized for women and families, according to city officials.

On Tuesday night the Guardians Foundation, which operates the city’s hoteling program, used 19 of the 20 rooms it has funding for. There were no low-barrier beds in low-barrier shelters for adult women. The city-owned shelter on Cannon Street, which is coed, was also full.

The council also approved funding Monday for expansion of existing shelter for families and for women fleeing domestic violence.

Some people will refuse to enter a shelter even if beds are available, Garcia acknowledged.

“I’m not responsible for the population of people experiencing homelessness. I can’t control that, they’re adults. All I do is follow them where they go,” Garcia said.