If there is an emergency call 911.

In the City of Spokane, report trees blocking roadways to 311.

Trees entangled with power lines should be reported to Avista at (800) 227-9187.  For more information on power outages visit: outagemap.myavista.com

Downed trees and other non-emergency issues related to the storm in Kootenai County should be reported to 208-446-2292.

High winds toppled trees across the Spokane and Coeur d’Alene region Wednesday, knocking out power to tens of thousands of people as meteorologists reported the second-highest gusts recorded at Spokane International Airport.

The mayhem also killed a woman in her 40s after a tree fell on her car at 27th Avenue and Post Street, near Comstock Park, Spokane Fire Chief Brian Schaeffer said.

Another woman trapped by a fallen tree in her home on 63rd Avenue was rescued by city of Spokane and Spokane County Fire District 8 firefighters, Schaeffer posted on Twitter shortly after 6 a.m.

For households without power, the storm was expected to be a potential “multiday event,” Avista Utilities Operations Director David Howell said Wednesday. By Wednesday evening, Avista’s outage count showed about 51,000 households in the Spokane area still without electricity. 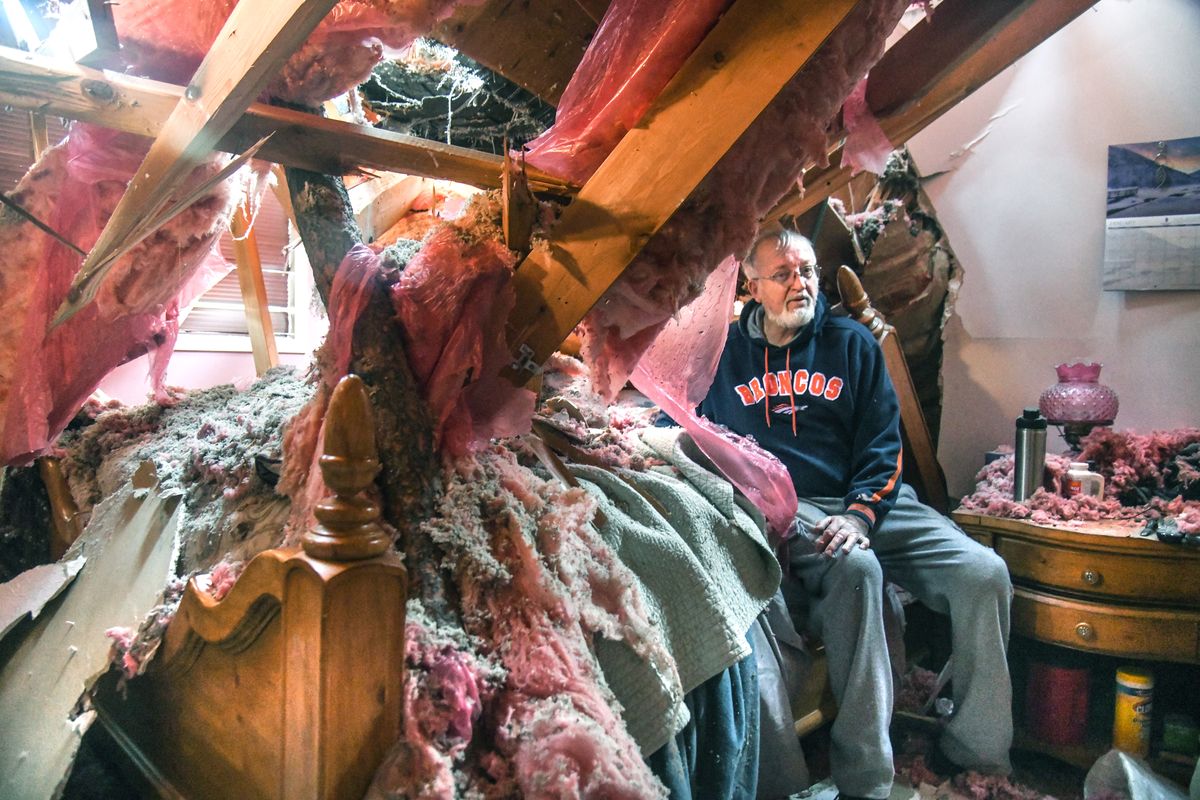 Bill Oliver, 81, was lucky to make it out of his bed alive after a pine tree crashed into his bed as he slept, Wednesday morning, Jan. 13, 2021 in Spokane Valley, Wash. High winds cause extensive damage throughout the area. (DAN PELLE/THE SPOKESMAN-REVIEW)

The steady roar of winds Wednesday morning was punctuated by loud snaps and crashes on Spokane’s South Hill, left littered with fallen trees and downed power lines that forced some residents to evacuate and businesses to shutter.

A massive pine tree was uprooted and fell across 28th Avenue near Division Street shortly before 7 a.m. With an odor of natural gas lingering in the air, firefighters evacuated the entire block for about an hour, as neighbors sheltered the temporarily displaced residents. By about 8:30 a.m., most of the block’s residents were allowed back inside their homes.

“No one got hurt,” nearby resident Bryce Thomas said. “It just kind of fell in the road, and I guess that’s about as good as it could be.”

Many of the trees that line Manito Boulevard just south of 29th Avenue were torn from the ground.

One in front of Regeena Fine’s house was uprooted and splayed across the lawn but spared her house – and the little free library in front of it. She had hoped to send her kids to school, where it would be safer, but learned that school was canceled.

Despite the tree that had fallen in their lawn, neighbors Pat and Sue Dalton agreed it was less severe than the 2015 windstorm, but still worse than expected.

Schaeffer agreed the storm isn’t as bad as 2015’s, although Wednesday’s storm caused a “significant amount of damage.”

“The overall system that we have to mitigate emergencies exceeded its maximum at one point and many of those calls that were nonpriority in nature were placed in the queue to be dealt with when we could add resources to the system,” Schaeffer said.

Fire crews were dealing with everything from structurally damaged homes to people stuck in elevators, Schaeffer said.

For the more than 20,000 households without electricity in Coeur d’Alene, restoration could take longer than in Spokane after crews waited out the storm to check for problem areas, Howell said.

On the South Hill, the status of power varied almost block by block.

Rocket Market on High Drive was forced to close early due to a power outage, but businesses not far south on 57th Avenue were operating without interruption. Traffic signals at the corner of 37th Avenue and Grand Boulevard were out but still functioning in some other parts of the South Hill.

The powerful winds were expected to last through at least 3 p.m., Howell said. The peak of the storm, however, was between 4 a.m. and 7 a.m., according to the National Weather Service in Spokane.

“The storm hit with the greatest fury just as the morning commute was getting started. Responding to address safety concerns is the City’s top priority today; please use extreme caution,” Mayor Nadine Woodward said in a statement.

An unofficial gust of 71 mph was recorded at Spokane International Airport, tying the second highest on record, which was documented during the ferocious November 2015 windstorm. The all-time high is 77 mph during a June 2015 thunderstorm.

“We’re seeing wind gusts anywhere from 50 to 65 mph,” said Charlotte Dewey, a meteorologist with the National Weather Service in Spokane.

The damage from the storm was apparent in Spokane Valley’s southern neighborhoods as well. The top of one tree appeared to have broken off against the rooftop of McDonald Elementary School. Along University Road near East 22nd Avenue, a tree fell atop a house, uprooting from beneath the sidewalk and catching a power pole on the way down.

Blocks away, a tree blocked the road at East 21st Avenue right next to Dennis Rae’s house. The tree fell Wednesday morning from the yard across the street, missing Rae’s house by just feet.

Rae, who’s lived in that area since 1959, said falling trees in that neighborhood are common in such conditions.

“Pine trees generally have a fairly good taproot that goes down deep,” he said. “But as we moved in and people water (their lawns), the root system doesn’t have to go as deep to get the water, so it’s more shallow root. When the ground is moist and the wind is blowing like this, it can topple trees.”

Rae, who has “seen a fair amount of trees come and go,” said he is a bit concerned with the others surrounding his property.

Temperatures will fall from recent above-average highs into the mid-30s, closer to the 34 degrees normal for this time of year.

“It’ll be a little bit calmer for us,” Dewey said.

Public safety officials asked people to stay home if they can. Parks officials asked citizens to stay out of parks until winds subsided and debris could be cleared. Shelter space was available for those experiencing homelessness, according to the city.

Avista said customers should prepare for long power outages and assessments could take more than 24 hours.

Downed or damaged power lines should be treated as active and left alone.

The 911 dispatch center was overrun in North Idaho after receiving more than 400 calls reporting downed trees and other weather events, the Kootenai County Sheriff’s Office said.

Vera Water and Power, which serves portions of Spokane Valley, had approximately 2,500 customers without power as of 7:30 a.m. With that count only down to 2,000 by afternoon, Vera asked customers to prepare for an extended outage that could last several days.

Modern Electric Water Company in Spokane Valley had just shy of 4,000 outages around 7:30 a.m., with all but 10 restored by 4 p.m., general manager Joe Morgan said.

Later Wednesday, SPS announced on Twitter that all in-person, distance learning, Express child care, day camps and meal kits will be canceled Thursday, due to the widespread outages and many schools still without power.

Coeur d’Alene public schools were scheduled to be remote on Wednesday, according to a news release from the district. Grab-and-go meals at Canfield, Lakes and Woodland middle schools were canceled.

Eastern Washington University and North Idaho College canceled classes, both in person and online, while Whitworth University delayed opening until noon. Most classes for the year have not started at Gonzaga University; however, law students continued with remote learning.

Meanwhile, Spokane County District Court was closed due to the weather.