Right on cue Monday morning, the sun cut through the clouds just as the first buses pulled into the parking lot at University High School.

Principal Keven Frandsen looked as if he wanted to rip the mask off his face and shout to the heavens.

Considering that most summer vacations last about three months, it felt even better.

It’s been 10 ½ months since COVID-19 banished most students in the Central Valley School District back to their homes.

They have returned only gradually since the fall, with secondary students – one-fourth of them at a time – finally roaming the halls at University, Central Valley and Mica Peak high schools.

Monday also marked the return of seventh- and eighth-graders to the district’s middle schools.

They entered those halls under the strictest safety measures. Upon arrival at the front door, each U-Hi student was given a temperature check and asked to hand in a piece of paper, an attestation that they haven’t been exposed to the virus or been in close contact with someone who was confirmed to be positive.

At that point, they followed the arrows to class, where desks were socially distanced. Each was occupied by a student.

All wore the required masks. But even after five months of distance learning, biomed teacher Joe McCollum knew them all by their faces.

The sight brought a smile that no mask could hide.

“Having them back, it’s great,” McCollum said. “Virtual has worked OK, but this is a hands-on class, so it’s great to have our hands on some gear.”

Under district policy, the students at U-Hi and other buildings are divided into four cohorts – A through D – attending once a week except for Wednesdays, when all are home.

Until then, secondary students are back one day a week. McCollum plans to make the most of it.

“I told them that when they come back, the whole time we are going to be off electronics, and we’re going to be learning in the lab and get back some normalcy,” McCollum said.

Everyone was craving it.

Tina Corson, a freshman, hadn’t seen a classroom since her eighth-grade year at Horizon Middle School, which was cut short by the pandemic.

“Distance learning has been a lot harder than being in schools, but I’m excited to start and get back to normal,” Corson said.

That was easier because she sat next to her best friend, Annaliese Vogel, who looked forward to speaking with a live teacher “because it was really hard to ask questions at home.”

As McCollum began the lesson, Principal Frandsen stood in the middle of the cafeteria, microphone in hand. He welcomed the roughly 400 students, led them through the Pledge of Allegiance and reminded them to follow safety protocols.

“I know that all of you have your masks on over your nose and are staying 6 feet apart,” Frandsen said at a volume that carried through the halls.

A few students were doing neither, but they were a tiny minority. One boy went beyond the call. Needing to fill his water bottle, he refused to break the rule and walk against the one-way arrows.

“So I’m taking the long way around,” he said.

Spokane Public Schools is scheduled to provide some in-person instruction for all students by March 1. 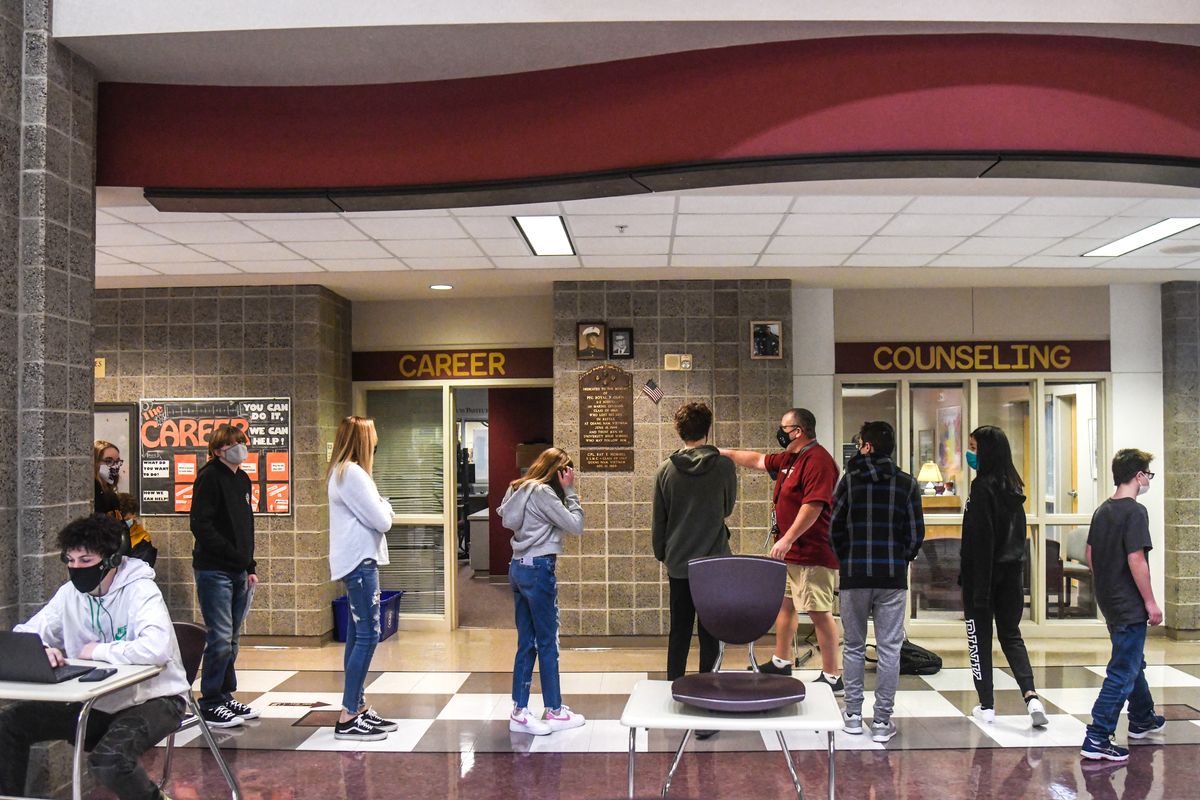