PORTHILL, IDAHO – The Jacobsons keep a piece of scrap paper next to the cash register to tally the number of customers they see each day.

On a good day, they have 12, but most days it’s more like five or six. Much of the sales are a bottle of water or a bag of chips.

On Tuesday, Landen Jacobson and his sister Burgandy served seven customers and a few Canadians picking up parcels for their business across the border.

In between the few customers, Landen Jacobson, 30, walked through the property, looking at repairs that they can’t afford to make, while Burgandy, 25, sorted the few packages still being delivered to their shop. They used to get up to 300 a day, but now they only get a dozen.

Before the pandemic, Jake’s Landing – a convenience store, gas station and shipping depot – would be packed with Canadians coming across the border for cheap gas, food and package pickups.

In their convenience store, one wall would be completely stocked with beer and cheese – two of their most popular items for Canadians who say they are too expensive or not as good across the border. The shelves would be packed with snacks or camping gear. 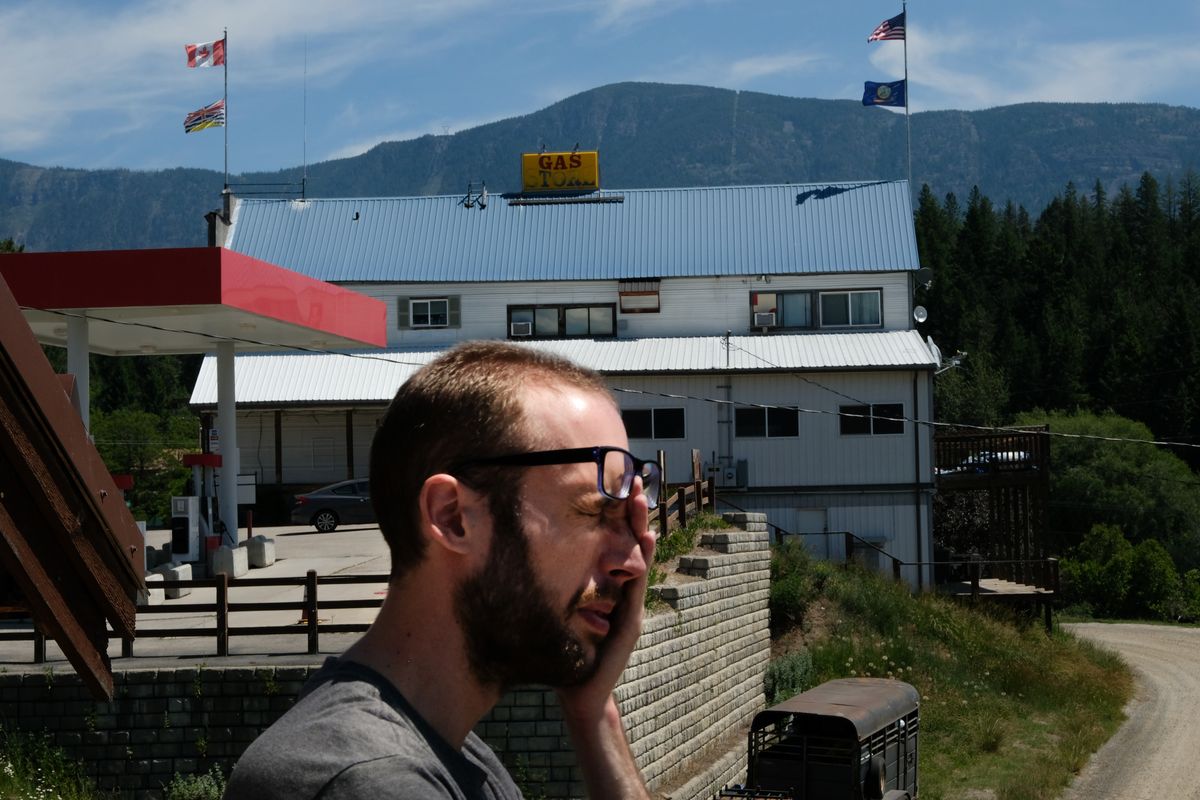 Landen Jacobson, 30, runs a hand over his face in the midday sun Tuesday outside his family’s store, Jakes Landing, near the Porthill Point of Entry near Porthill, Idaho. The Jacobsons bought several buildings on the Idaho–Canada border just before the pandemic hit. (Tyler Tjomsland/The Spokesman-Review)

But when the COVID-19 pandemic closed the U.S.-Canada border last March, the family-owned business lost 95% of its customers, and now their shelves are sparsely stocked.

The Jacobsons, who bought the business just nine months before the pandemic, cut back on hours and are now only open twice a week. They laid off all employees who weren’t family. The older pair of the 10 Jacobson kids now run the store for free.

The sales they make in a month right now still don’t equal a day before the pandemic started, owner and father Lars Jacobson said.

Border closure remains for another month

As the U.S.-Canada border remains closed, many small towns in Eastern Washington and North Idaho are just barely hanging on.

Most are almost completely dependent on Canadians who come down for tourism, cheap gas or goods they can’t get up north. In normal times, most of the cars in town have Canadian plates. Gas stations sell fuel in liters, and stores have both Canadian and American cash registers.

Residents with dual citizenship or family on both sides go back and forth regularly. For many in the U.S. towns, Canada has the closest Walmart or grocery store. They have doctors, pharmacists and mechanics just past the patrol.

In Washington, Gov. Jay Inslee expressed his frustration with the extended closure. He said he’d like to see the border open “tomorrow for vaccinated people, and I see no reason not to do that.”

“I’m disappointed the federal government has not agreed to reopen the border,” Inslee told reporters Thursday.

With no end date in sight, many businesses have been forced to close their doors forever.

Others have managed to stay open the past 15 months, but barely.

And almost no one has any idea what the future holds.

Gee, 24, had bought the Morning Bear Coffee Co. stall in Northport two weeks prior. She knew nothing about making coffee but had always wanted to own a business.

The shop is located about 8 miles from the nearest Canadian border crossing. Most of her customers before the closure were people going to and from Canada. Now, she’s lucky if she gets 20 customers a day.

Not only was she losing her biggest customer base, but she was also losing her training time before taking over the business.

Where will our customers come from? she remembered thinking. How will I learn to run this place?

To make up for the lost business, Gee had to raise prices, change hours and cut back on staff. Now, she is the only employee of the shop, working six days a week.

At the beginning of the pandemic, she was also making regular trips to Spokane to pick up supplies, as it was difficult to get dairy or other items all the way up to Northport. She left at 4 a.m. to get back by 7 a.m. to open the shop.

Gee said she’s relied heavily on the locals who come every day, sometimes twice a day. She’s started using Facebook to post regularly about specials and give shoutouts to regular customers and other small businesses.

“We just take it one week at a time,” Gee said.

Kevin Borseth, who helps out his mom – owner of the 5th Avenue Bar & Grill in Metaline Falls – said they lost 75% of their business when the border closed. They’ve gained some more business recently, but he said they’re still not even at 50% of what they used to have.

Their current business is all thanks to the locals, Borseth said.

“But it’s nothing compared to people traveling,” he said.

To keep their doors open, the restaurant changed their hours, cut back on staff and took items off the menu that never sell. Borseth stopped taking pay. The restaurant also started hosting karaoke nights, which have brought in some new business, he said.

In Oroville, tourism is actually up, Sandy Andrews, co-owner of the Camaray Motel, said. The motel sign currently reads, “THE I CAN’T GET INTO CANADA PLACE TO STAY.”

Last summer was the best the motel has had in the 11 years Andrews has owned it. A few new businesses also opened in town within the last year.

People from Seattle and the rest of Washington have now discovered Oroville, which sits right on the Osoyoos Lake, she said.

Northport Mayor Karene Balcom said most businesses in the town have around 70% Canadian business. Balcom owns a Chevron station within 15 miles of the border, and it’s lost about 60% of its business. Canadians come to the Northport area for its recreation, Balcom said.

She said she’s confident the Canadian business will come back when the border reopens, but she doesn’t know how the town will recover.

Standing on the balcony of the restaurant on the Jake’s Landing property, Landen Jacobson can see almost everything the family owns. There’s the six gas pumps, the package storage unit and the strip of land right next to the river.

Just past their land is the Kootenay River, which runs north into Canada. About 500 feet north is the Canadian border crossing.

The previous owner of the Jake’s Landing property advertised the sale as “owning the little town of Porthill.” Lars Jacobson, who moved to North Idaho from Southern California to retire, knew he should buy it.

Now, he and his family own all the businesses in Porthill except the U.S. Post Office. Their plan was to spend the first year getting to know the business before starting to upgrade it, Landen Jacobson said.

Then the pandemic hit, the border closed and, almost within one day, all of their customers were gone.

Right now, Lars Jacobson said he is relying on hope, his family and his community, which started a GoFundMe and helped organize other fundraisers at the business. They’ve started to give Canadians who can’t come pick up their package in the depot the option to donate it to the business.

To try to get some revenue during the border closure, Jake’s Landing is opening up its riverfront area to camping and RV parking. The hope is when more people stay on the property, they also visit the convenience store or purchase gas. They’ve also started renting out the apartment above the restaurant as an Airbnb.

But that may only help so much.

“It’s not going to change the deficit,” Lars Jacobson said, “but it may change the amount.”

At the end of each month, Landen Jacobson and his dad analyze their finances. They look at utility bills, their mortgage and how much they’ve sold. They try to budget with the hope that the border opens soon, Landen Jacobson said, but they’re at the end of their rope right now.

As he overlooks the river, the border crossing and their land, Landen Jacobson thinks about the dreams they had when they bought the place: They’d turn the land by the river into a campsite; they’d upgrade parts of the old buildings; they’d reopen the restaurant.

“We had a lot of plans,” Landen Jacobson said. “COVID crushed a lot of that.”