With temperatures in the low 60s for the past few days, business has been good for Trailhead Golf Course in Liberty Lake.

“All of Spokane is trying to get out, it seems like, to play the golf course,” said Troy Smith, Trailhead’s assistant PGA professional.

Smith said he expects more of the same Friday, with temperatures forecast to reach as high as 62 degrees. That would break the record for March 5 in Spokane of 61 degrees set in 1987, said Steve Bodnar, meteorologist for the National Weather Service in Spokane.

Along with potential record highs, winds of up to 20 mph are expected for Friday, said Bodnar, who noted concerns with the potential for brush fires given the recent dry week.

Bodnar said the warmer temperature is a result of two different weather systems, citing a strong ridge of high pressure over the northern Rocky Mountains that’s helping to build up heat in the Northwest, along with a low-pressure trough moving slowly on the Washington coast.

“That places Eastern Washington and Northern Idaho sandwiched between these systems for a day,” he said, “and it’s going to maintain a consistently steady flow and allow that warm air to move into our area for a day ahead of the cold front.”

That cold front, Bodnar said, is expected to come in Friday night and bring temperatures back to normal for the weekend.

The forecast for Saturday and Sunday calls for mid- to upper 40s, with on-and-off showers possible. Bodnar said early next week’s forecast is predicting similarly scattered showers, with temperatures in the low- to mid-40s. Bodnar said snow or graupel is possible for a few of those days. 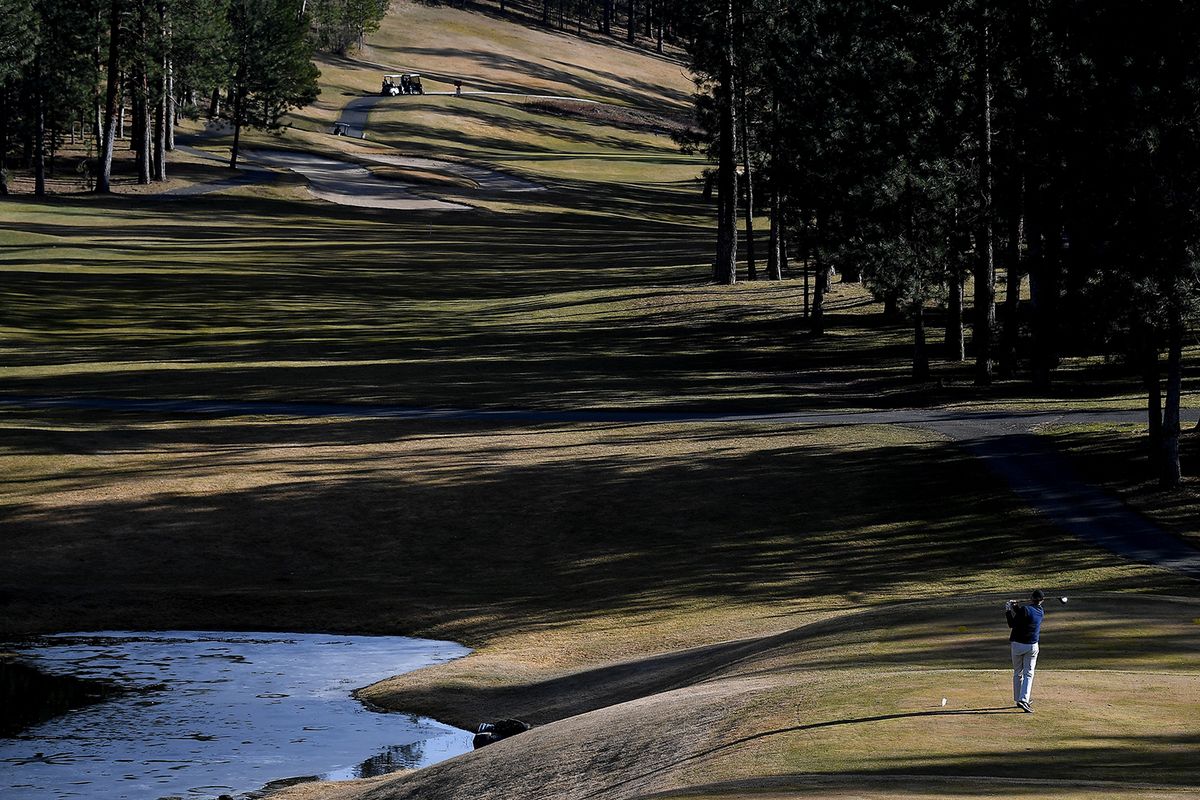 A golfer tees off on Thursday, March 4, 2021, at the Creek at Qualchan Golf Course in Spokane, Wash. Golfers took to the course to enjoy the sun and opening day. (Tyler Tjomsland/THE SPOKESMAN-RE)

The outlook for mid-March, meanwhile, forecasts near- to below-normal temperatures for the Pacific Northwest, with no strong indication for above- or below-normal precipitation, according to the National Weather Service.

Finally, the odds for the months of March, April and May suggest near- to below-normal temperatures for the region, with near- to above-normal precipitation, Bodnar said. He said the projections are based on global weather patterns and historic trends from the La Nina index as evaluated by the Climate Prediction Center.

As the season progresses for Trailhead, Smith said the all-year golf course is expecting to see less patronage as more links open for the season. That includes the Creek at Qualchan Golf Course in Spokane, which opened for the season Thursday.

Meanwhile, Smith said Trailhead Golf Course expects to reopen its driving range soon, once repairs are done to the netting, which was damaged in January’s windstorm.

“It should be a good start to the season,” Smith said, “but you never know: We could get snow a couple weeks from now. Hopefully not.”

Looking ahead, Smith said he doesn’t expect quite the influx of customers Trailhead had last year when the COVID-19 pandemic limited the area’s available recreational activities.

“I think everyone’s at the point where we’ve been in this too long and we want to move forward,” Smith said.