The towering twin icons of the Spokane skyline will change hands.

Owned by Avista for more than a century, the brick building once burned enough coal to power and heat hundreds of buildings throughout downtown. Its two smoke stacks reach 225 feet into the air, illuminated beacons of the downtown center at night.

The Steam Plant will be sold to Dicker’s GVD Commercial Properties. Avista did not disclose the sale price in a news release on Friday.

“It is with mixed emotions that Avista decided to sell this property, which has played such an important role in the history of our company and the city of Spokane for more than 100 years,” said Ed Schlect, president of Avista Development, a subsidiary of Avista Corp., in a news release.

Dicker, a longtime developer and businessman, began his career in California, but moved to Spokane in 2001 and has invested heavily here ever since. In 2011, Dicker bought the Bing Crosby Theater. He’s president of Ruby Hospitality, the properties that include the Ruby River Hotel, The Montvale Hotel and the Hotel Ruby.

It was not immediately clear what Dicker’s plans are for the Steam Plant property, but Avista indicated he intended to “continue” its development.

The building was purposefully located next to railroad tracks, which would bring in shipments of coal to be burned in the Steam Plant.

After decades of energy production, the facility had been dormant for more than a decade when Avista tapped developer Ron Wells in the late 1990s to reshape it into a blend of office, restaurant and retail space. Though developed by Wells, Avista retained ownership of the Steam Plant.

“That building has opened up to me and talked to me more than any other building I’ve done. It has such a rich heritage,” Wells told The Spokesman-Review in 2017. “It’s a huge gift to Spokane. There’s just nothing like it. No other city has saved a steam plant to that degree.”

It was last renovated in 2017 in a project that included the Steam Plant’s event center. 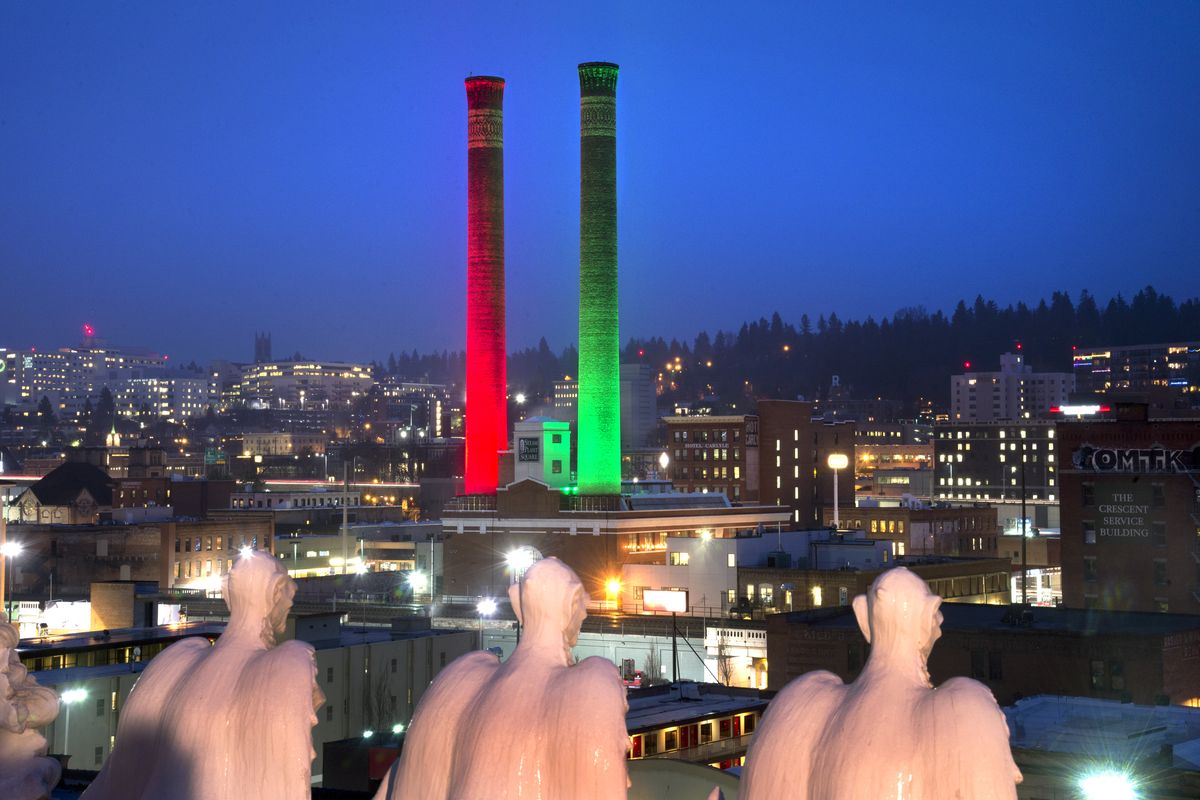 The Steam Plant stacks glow with red and green lights for the 2014 holidays in downtown Spokane. (DAN PELLE/THE SPOKESMAN-REVIEW)

Today, the building no longer burns coal, but the underground network of tunnels and pipes connected to it are still used by Avista to carry power to the downtown district.

The Steam Plant was “just part of a natural review” of Avista Development’s assets, Schlect explained to The Spokesman-Review. It decided last October “to explore a sale to see if we could find the right buyer” and launched a public process.

“We had some interest from in Spokane and even outside our region, and part of that is just the unique nature of the property,” Schlect said.

The Steam Plant was ranked by Men’s Journal as one of “The 10 Coolest Places in America to Drink Craft Beer,” Schlect noted.

Avista felt Dicker was a good buyer based on the preservation work he’s done in the community, Schlect said. He also owns several properties nearby.

The sale to GVD Properties includes the adjacent Seehorn-Lang building and parking lot.

Avista owns a substation directly adjacent to the Steam Plant building that is not included in the sale. It plans to replace that substation with a new facility on the 700 block of Third Street at the site of a former Domino’s Pizza.

The relocation of the substation is unrelated to Avista Development’s decision to sell The Steam Plant.