The five main features of the redevelopment

A master plan drafted to guide Riverfront Park's redevelopment identified five features that the Parks Department focused on when spending the $64.3 million set aside by voters in 2014. They are:

Main contractor: Lariviere for the Howard Street Bridge, Garco for construction of promenades around the Pavilion

There’s the overarching playground theme of the Missoula floods, the massive glacial-fed torrents that carved much of the region’s geographic features, of course. But there’s also the rebirth of a beloved local skate park, a climbing boulder bearing the name of a native son mountaineer lost to an avalanche and, coming this fall, a new shrine to Spokane’s status as an outdoor basketball capital.

Desi Flora, a 4-year-old dressed in a Rapunzel dress Friday afternoon, was instead transfixed by the towering, twisting slide that was drawing a sizable crowd of her peers.

“That one’s fun, because it’s dark,” said a grinning Desi, pointing to the blue slide behind her she’d just tumbled out of, one of three cascading from a tower bustling with giggling children. “They’re all my favorite.”

The opening Friday of the north bank playground marks the end of a nearly decade-long effort to revamp the 100-acre urban park that was previously the site of Expo ‘74. While the renovated U.S. Pavilion may have been the biggest-ticket attraction of the rebuild that began with voter passage of levy funds in November 2014, the playground and its surrounding amenities represent the biggest transformation taking place since then, said Parks Director Garrett Jones.

“This really makes Riverfront a park now,” said Jones, previewing the park’s amenities for members of the media on Thursday. “Everything you see behind me is free. It’s really a destination.”

That was true for Desi and her grandfather, Brent Allen, part of the opening day crowd on a brilliant Friday afternoon.

“I’ve had it on the list for a while,” Allen said, waiting for Desi at the bottom of the slide. 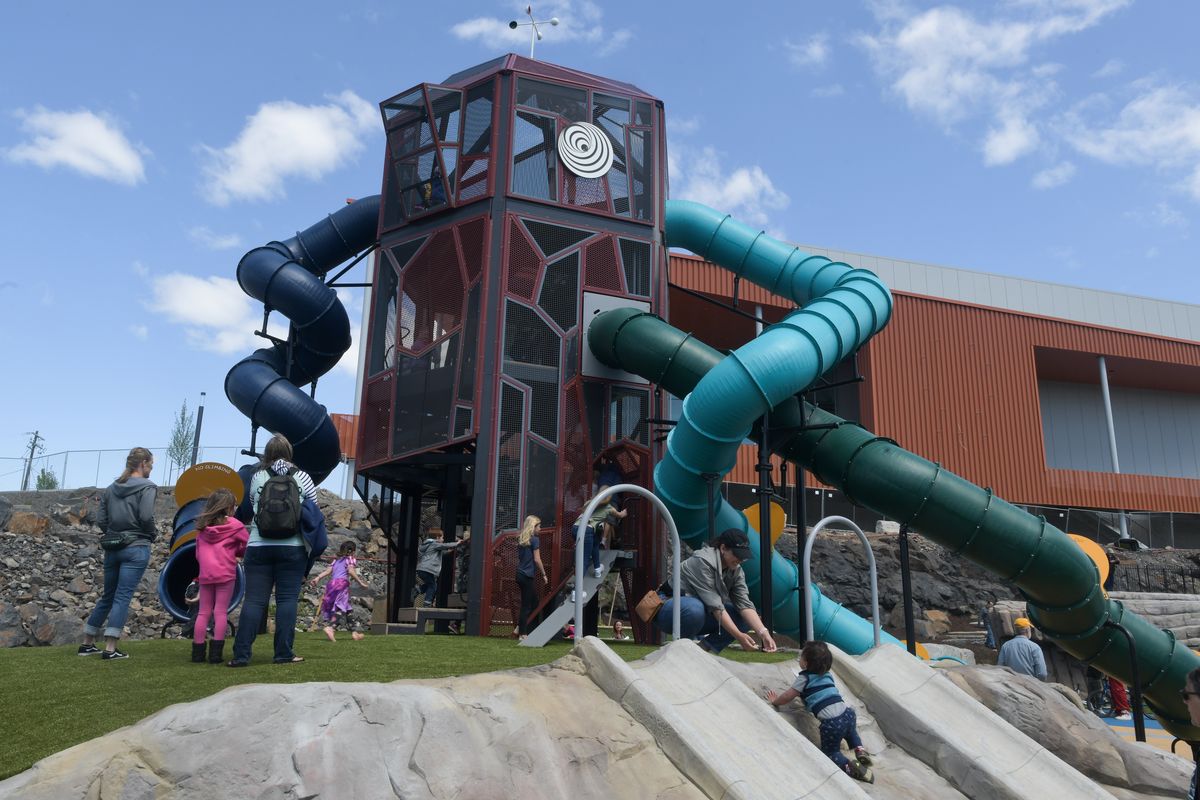 Tucked between the northern terminus of the central promenade and the still-under-construction Podium sports complex, the playground area features multiple playscapes designed and built by Bernardo Wills and LaRiviere. Those features pay homage to the basalt of the region, and the combination climbing wall/splashpad will tell the story of the Missoula floods.

“This is the first Ice Age-themed playground in the state of Washington,” said Melanie Bell, president of the Ice Age Floods Institute, Cheney-Spokane chapter. Bell, a local substitute teacher, said she was teaching her students about the geography-changing floods and urging them to live – and play – history at the park this weekend.

The faux rock climbing wall, part of a water feature that mimics the ice dam breaches that caused the floods, bears a quote from J. Harlen Bretz, the geologist credited with determining their role in shaping the region’s geographical features in spite of initial skepticism from his field.

“I could conceive of no geological process of erosion to make this topography, except huge, violent rivers of glacial melt water … ” the quote reads.

Other stories are told in the amenities surrounding the playground, some of them built with private investment dollars that supplemented the $10.7 million in bond funds used for design and construction.

One of the amenities built with bond dollars was the 8,000-square-foot skate park, intended to take the place of the former Under the Freeway skating area, closed in August 2015.

A centerpiece of that attraction is an old rail salvaged from the former park.

“Some of these kids, that’s the first rail they ever hit,” said Josh Yandell, owner of Pistole Boardshop in downtown Spokane and part of the booster effort to get a new downtown skatepark after the UTF park closed.

“Now, it’s about bringing people out to the park,” Santangelo said Thursday, as Naughty By Nature’s “O.P.P.” played over the sound system. Hooptown has opened registration for an adult 5-on-5 basketball league that will begin play in July on the courts, and will hold COVID-19 vaccination clinics in partnership with MultiCare to coincide with Hoopfest’s usual weekend in late June.

The 3-on-3 basketball tournament is scheduled to return in September, and Hooptown plans to dedicate a new Hall of Fame at that time honoring great teams and players in the area’s basketball history.

Spokane Arts has also partnered with the organizations to provide a mural on the court’s surface. The design, a multicolored depiction of two hands gripping a basketball, was created by muralist Joshua Martel, who’s also responsible for the design on the public court in Chief Garry Park. The design was selected by an arts committee with input from the public, said Spokane Arts Executive Director Melissa Huggins.

“There was a public survey where people got to vote on the designs, and this was far and away their favorite,” Huggins said.

The court will be fenced while the mural is completed, but visitors will be able to watch the painting process unfold over the next several weeks, Huggins said.

A climbing boulder in the center of the play area bears the name and motto of Jess Roskelley, the alpinist who died in April 2019 while caught in an avalanche descending Howse Peak in Alberta, Canada.

Allison Roskelley, Jess Roskelley’s widow, said Friday the unveiling of the rock made good on an idea she and her late husband had to build a climbing feature in the park’s north bank area. That plan was nixed in September 2017.

“You know, I think with this boulder on the North Bank, and this multifaceted facility, I think his dream really did come true on this,” Roskelley said.

The climbing rock is inscribed with Jess Roskelley’s life motto, “fortitudine vincimus,” a Latin phrase that translates to “by endurance, we conquer.” The phrase was tattooed on Jess Roskelley’s chest.

The opening of the playground and surrounding areas doesn’t mean a complete end to work in the park. Staff are shooting for fall for the installation of two art pieces, “Stepwell” and “The Seeking Place,” this fall.

The island Sn̓xʷméneʔ – pronounced sin-HOO-men-huh – has been closed since April and will remain closed until at least the winter as workers repair the north suspension bridge in the park. The $3 million project is using about a half-million in leftover bond dollars, as well as money from a taxing district on the north bank and some state and city dollars.

After the water spouts began gushing, the first splash pad to open in Spokane this summer, young families watched their children scamper over climbing areas, tumble down slides and dig in a sand pit hiding play fossilized remains of indigenous animals. Ashley Nevin and Bryson Strom tried to slow their 4-year-old, Theo, long enough to talk about the slides he enjoyed, but he just kept sprinting away.

“I feel like, these last couple of years, there haven’t really been people out and about,” Nevin said. The family had been waiting to get in Friday, and Strom joked they tried to bribe someone to let them through the gates.

By 12:30, lines had formed at the top of the column of slides in the center of the park. Thomas Laughlin, 5, took a break in the shade beneath a rock structure. Like Desi, he had trouble picking his favorite slide.

“All parks are cool for me,” Laughlin said, sitting next to his kid brother, Emry.

Seth Laughlin, Thomas’ father, said they planned to grab some lunch nearby.

“I don’t see them leaving anytime soon,” he said grinning.

And, with that, Thomas ran toward the slides, off to write his own story on a Friday afternoon.