The first law of robotics, according to science fiction, is that robots may never harm a human being or, through inaction, allow a human being to come to harm.

The first “rule” of robotics in John Shovic’s classes at the University of Idaho, meanwhile, is much less ominous.

“Robots are dumb,” said Shovic, a professor in robotics and artificial intelligence. “Robots can’t do anything without software controlling them.”

Testaments of that would be apparent if Shovic were to give you a tour of the program’s work in North Idaho College’s Hedlund Building. 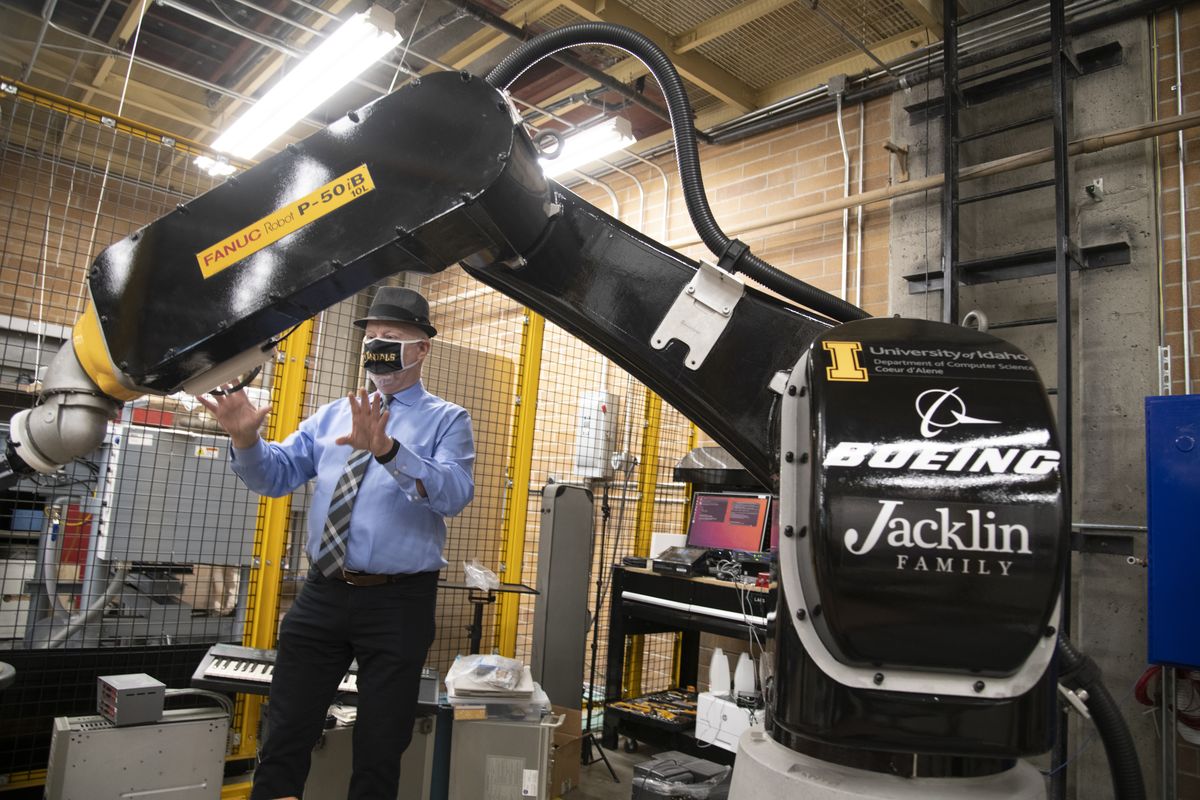 Professor John Shovic talks about the potential uses of the giant articulated arm robot in the University of Idaho robotics lab at North Idaho College in Coeur d’Alene, the new location of the program that his been in Coeur d’Alene for three years. The robot was donated by Boeing. The Coeur d’Alene-based program offers advanced degrees in robotics. (Jesse Tinsley/THE SPOKESMAN-REVI)

There, you’d meet Larry, a 784-pound FANUC robot donated to the university from Boeing. Named after Larry Stauffer, the former dean of UI’s college of engineering, Larry can dance to music just as well as it can recognize and follow faces.

Then there’s Baxter, a general-purpose robot who can pour cups of coffee with a smile.

Larry, Baxter and the other robots on which UI students are working in Coeur d’Alene are only able to do what they can thanks to thousands of lines of code developed by students, Shovic said.

Shovic said the focus on ingenious software techniques, such as those that might drive Larry to learn “Chopsticks” on the piano in the next few months (if a student’s semester project goes well), is what makes UI’s robotics program stand out among others centered more on mechanical engineering.

Beyond Larry and Baxter, the robotics program is tinkering with a miniaturized “factory” set from Fischertechnik that simulates an automated manufacturing line. Students are also working with an autonomous submarine used for lake sampling.

The robotics courses are part of the university’s computer science degree program.

Started three years ago, the robotics program was formerly located in the Innovation Den on East Lakeside Avenue before moving to Hedlund to start the fall semester, primarily because the program needed more space, Shovic said. The Hedlund space was previously used by NIC’s career and technical programs, which have since moved to Rathdrum.

UI partnered with NIC with computer science programming. Through what’s known as a “2+2 Program,” students can take their first two years at NIC for an associate’s degree before transferring those credits directly to UI for the last two years of their bachelor’s.

“We’re finally getting to the point where we can do some real research and science and advance the state of the art by having multiple professors up here and graduate students, which is where a lot of the good research gets done,” Shovic said.

Having the robotics program in Coeur d’Alene also complements the industries in the region that rely on this type of technology, said Shovic, who specifically referenced Schweitzer Engineering Laboratories, the Idaho Forest Group and Continuous Composites.

The correlation, he said, provides natural pathways to employment for graduating students.

“We are building a manufacturing robotics program here in Coeur d’Alene. We’re focused on automation,” Shovic said. “We’re not out building self-driving cars or anything like that. What we’re doing is trying to make robots smarter to be able to do some of those dirty, nasty jobs that people don’t want to do anymore for all sorts of different reasons.”

Hunter Hawkins still has a while to go with his education before he’ll have to worry about that.

The Coeur d’Alene native earned his associate degree at NIC before transferring to UI, initially taking classes on the Moscow campus. Given his roots in Coeur d’Alene, however, Hawkins said the robotics program was a natural fit.