“Ever since I was little, I always wanted to skip school and go to work with my dad, getting to go ride in the equipment,” said Green, who lives nearby in Mt. Hope, Washington. “My grandpa and dad made it fun enough that we liked coming out. As you get older, you start to realize more of what farming is, and the legacy it leaves.”

He’s a seventh-generation farmer working that land along with brother Jordan Green, 30, who shares the same sentiment to bring a future to Green View Farms. The brothers both graduated with agricultural systems management degrees from the University of Idaho and now run the farm with their parents, Lonnie and Marci Green.

“A big part of it is my parents – pretty much everything they do is for the future, for me and Jordan, and that’s how we feel. We want to leave it better than what we got – as far as the land, the financials, everything,” Derek Green said.

Using more equipment and growing a variety of crops, their family farm today requires only the four of them and one full-time employee. For the recent harvest, they temporarily hired two high-school students to drive a combine and a tractor.

Derek Green said earlier this month there’s an upside to each year’s early bluegrass seed harvest. “We’re going to get a lot of acres done when a lot of farmers haven’t even started. It just helps us get some of our workload done sooner so we’re not quite so pressured at the end of August. You never know if the weather is going to change.”

It helps that the farm can diversify, Marci Green said. 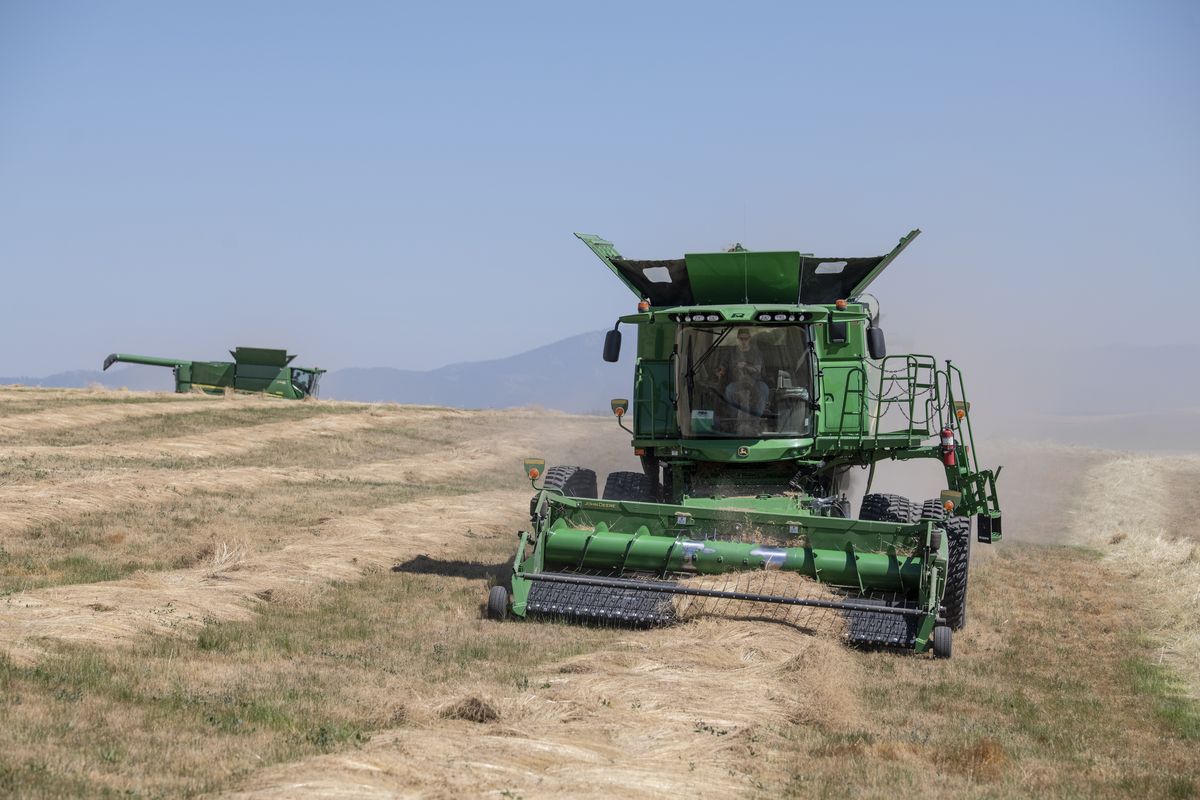 Derek Green, one of Lonnie and Marci Green’s two sons, drives a combine and harvests bluegrass seed Aug. 2 on the family farm near Fairfield, Wash. Derek’s brother, Jordan, is following him in another combine. Another is driven by a farm employee. (Jesse Tinsley/The Spokesman-Review)

The farm goes back in Marci’s family to Rufus and Cordelia Kegley, who in 1878 homesteaded 160 acres that’s still part of what’s farmed now.

Felgenhauer is the surname of Marci’s great-grandparents, grandparents and parents who also farmed. Her dad, Karl Felgenhauer, 82, is retired with her mom in Spokane.

The farm now operates on acreage that includes a patch near Rockford, but is mostly in the Fairfield area – including land under lease arrangements with extended family. It was once split up in 1964 among family, and in 2018 arrangements were made among relatives, bringing it back together.

Predominant crops are wheat and bluegrass seed, the latter being one that many other farmers stopped growing. Citing clean-air issues and respiratory health concerns from smoke, Washington banned grass field burning by 1998, then affecting nearly 41,000 acres of Kentucky bluegrass grown statewide. Idaho growers phased out the practice by the 2000s, except on sovereign Indian lands.

But after years of tinkering, bluegrass has returned as a beneficial crop.

Now, he said the farm is seeing success with newer varieties of bluegrass, along with higher demand in recent years for the byproduct of grass straw, baled and shipped mainly overseas for livestock.

The newer bluegrass varieties can produce good yields for up to about four years, and then a field is rotated into another crop such as a legume. Other farmers are slowly returning to grass seed production.

“Back in the day, many farmers around here grew bluegrass seed, but when they couldn’t burn, a lot of them converted over to Timothy hay,” Marci Green said. “It dropped way down to where there were very, very few of us still growing grass seed, and now people have started getting back into it.

“We started to figure out how to do it without burning, which means we bale the straw off the field, and there is some (livestock) nutritional value in it. When we first started baling, you couldn’t hardly get rid of it. Now, most of ours gets exported to Asia.”

The bluegrass seed is a commodity in demand for lawns, golf courses, parks and residential yards. The farm hauls seeds to Tekoa-based processor Seeds Inc.’s facility in Setters, Idaho. Lonnie Green drives the farm’s semitrucks with Seeds Inc.’s trailers to that site.

His son, Jordan Green, drove a second combine on Aug. 2. They watch for windy conditions that increase the fire risk, and sometimes have to stop the day early, but hot weather for bluegrass harvest is key, he said.

“When we’re harvesting bluegrass, it has to be hot and dry, so we try to aim for 80 degrees or higher, and 30% humidity or lower,” he said. Those conditions reduce an unwanted cotton-like material from the seeds. “Usually, we are in the middle of July for bluegrass.”

“We didn’t start baling the bluegrass straw until we couldn’t burn,” he said. “We had all this straw and there wasn’t a market for it at first. A lot of it sat at first and some of it rotted, and then they figured out it could be used.”

Lonnie Green saw that full transition. He grew up in Spangle and met Marci in high school, then started working on her family’s acreage around 1988. His sons soon followed him around the farm.

“The boys both started running the combines that we had when they were 12 years old,” he said. “When they were littles, they would go wherever I went, just waiting for a chance to drive a tractor, or whatever I was doing.

“Compared to when I first started farming with Marci’s dad, we’ve tripled our acres to have enough for them to come back to. That’s usually the challenge.”

He said one of the bluegrass fields with a well-producing third-year seed crop likely will stay in another year. A downside to bluegrass production is that a first-year field can’t be harvested. Figuring future declines in yields isn’t an exact science. “It’s weather-related,” he said. Early on, drought conditions were brutal.

“The second crop of that grass field’s life is usually the best,” he said. “The weather screws that theory all up. Then this year, we’ve had some third-year stuff that’s been really good. And it’s variety-related. Different varieties are producing more, but you can only produce so much of each variety .”

Green View Farms has one variety performing well so new that no other farmer is yet growing it, Lonnie Green said. Such research has created some good results.

The farm doesn’t grow the varieties of 30 years ago. There’s one “old Ken-blue” variety, he said. “Most everything else we have are newer varieties that are doing well without burning. You plan on the shorter rotations.”

Over the years, Green family members occasionally have been asked: Why keep bluegrass?

“We’ve been pretty successful at it,” he said. “It’s been harder to make money at bluegrass, because when you were burning, you didn’t have to have as much equipment.” Exporting straw has offset baling costs. He estimated one-fourth of regional farms historically involved in that crop’s production have continued with it.

The family uses the same combines to harvest both bluegrass and wheat, with a different header attached. For bluegrass, it’s about 15 feet wide, while the one for wheat is 40 feet, Jordan Green said.

The swathed, or cut, grass is dried in the field for about 10 days.

“The combine picks it up and shakes it,” he said. The machinery separates out the seeds that fall through some grates into the tank, and the straw drops out the back of the combine into the field for later baling.

As seeds piled up in the combine’s tank, he moved out a chute to unload seeds into a trailer pulled by a tractor, driven by one of the high school students.

Like his brother, Jordan Green is married and also has a 2-year-old daughter, and his family lives in his grandparents’ former home. Among high school classmates, he believes he’s the only one farming, as their siblings mostly took on the family farms.

He agreed there’s better equipment today, and more of it, equating to less labor. He suspects the bookkeeping and office work his mother does is more complicated than ever.

“We’re just trying to take on more responsibility, and really just watching what both my mom and dad do, to learn how to manage the farm once they retire,” he said. “We haven’t set a certain time, and I’m sure once they do retire they’ll still be around helping.

“There will be an eighth generation. Whether they want to farm or not, we’re not going to force them. We weren’t forced. Most of us never thought of doing anything else.”

Derek Green said he now realizes how much world events can affect the farm, including war and input costs.

“Fertilizer is petroleum-based, plus there’s fuel. These machines run on a lot of fuel. There’s a lot of planning that goes into it.”

The family had expected to switch to harvesting winter wheat earlier this month, but this past Thursday’s hail storm wreaked havoc on some wheat fields, which Marci Green described as “probably a complete loss.” The storm damaged some of the family’s lentil and garbanzo bean crops between Fairfield and Rockfield.

“It’s different from day to day,” Derek Green said. “A farmer is not just one job – you’re an operator, business owner, mechanic, agronomist, a weatherman. It’s definitely a lifestyle, because we’re out here seven days a week right now from 7 in the morning until 9 at night, but that only lasts a few weeks.”

Likely, he said the farm will have to expand in the future. “It’s a business also, but it’s still the family farm. Today, it’s probably more of a business than ever.”